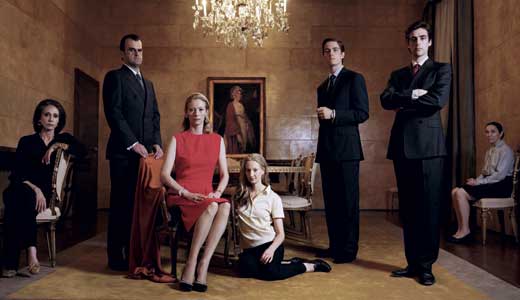 I Am Love @ Baxter Avenue Theatres

‘The Year’s Work in Lebowski Studies’

Have you ever tried to explain the cachet of the cult of Lebowski? It’s a bit of a challenge. I’m not the only one who feels this way. At the same time, the off-kilter worldview of the don’t-call-it-a-cult-film has fascinated geeks and wonks as much as those who just go with the flow, attend Lebowski Fest and order up their annual white Russian at the bar. Indiana University Press recognizes a social phenomenon when they see one, and so they put out the surprisingly hefty compendium “The Year’s Work in Lebowski Studies,” which will be celebrated in a discussion and signing at Carmichael’s. Co-editors Aaron Jaffe and Edward Comentale — genuine professors, both of them — compiled essays from sociologists and similar sharp-eyed types who collectively set “The Big Lebowski” among great works of art, cultural trends, historical movements and other perspectives. Not all of the essayists are totally serious — but you’d be surprised at how thoroughly your synapses are getting a healthy dose of analysis along with wry humor. —T.E. Lyons

Gucci Mane has yet to reach the level of Lil Wayne — the level where you ash your blunt on a Grammy statuette, which Wayne does in the pair’s video for “We Be Steady Mobbin’.” But Wayne is part of the growing list of rappers appearing on Gucci Mane’s growing list of atta boys. Swizz Beatz, whom Mane tapped to produce his post-prison statement, and E-40 are among others. Mane’s Dirty South flow is competent on The State Vs. Radric Davis, but the jury’s out on his bona fides. In writing about his appearance with Talib Kweli on the lethargic “Poltergeist,” Prefix Magazine wrote, “Hell is officially frozen over.” Judge for yourself. —Mat Herron

It might not always be considered socially acceptable to share personal stories of abuse, but for survivors of violence, sharing those feelings is an important step toward healing. It’s why the “Unspoken Truth: An Exhibit of Advocacy and Healing for Survivors of Personal Violence and Those Who Love Them” at Spalding University aims to take away the stigma. “Survivors of abuse often don’t tell their story because of the shame they have been made to feel,” says organizer Jeanne Tessier. “We hope this event will give them the courage to speak the truths they have been unable to express.” “Unspoken Truth” includes an art exhibit of original work from abuse survivors, live music, poetry readings and lectures on abuse and the long road to healing. Films “Precious” and “The Kite Runner” also will show. Although all the weekend’s events are open, Thursday’s opening is aimed at educators and therapeutic professionals. Check out the website for the full listing of times and events. —Rosie Haney

“I Am Love” is major art-house cinema, right from the long opening dinner scene that echoes Visconti. And much as that Italian director knew how to deposit Hollywood-friendly mega-talent into an otherwise off-putting affair (Exhibit No. 1: Burt Lancaster in “The Leopard”), Luca Guadagnino has gotten a world-class boost from Tilda Swinton. The English actress plays a Russian-born member of Italian high society. (Got that straight? If you’re still trying to pronounce the director’s name, skip that and catch up.) Swinton’s character is the linchpin of the industrialist family she married into — but her carefully maintained life begins to unravel. Does she need a change as radical as the one she chooses? Guadagnino leaves clues all over the two hours of subtitled film, which also incorporates subtext about how today’s economies screw up relations between social classes, plus it treats gourmet food as beautifully as great “foodie” movies like “Eat Drink Man Woman.” —T.E. Lyons

You said it, man: Robes, jellies and bowlers of the world are about to converge in Lebowski’s adopted hometown.

The bluesy stomp left over from last year’s Black Diamond Heavies show gives way to the alt-countrified Felice Brothers. BBC called The Felice Brothers’ Yonder is the Clock 2009’s best country album, and their show — part backwoods hoedown, part life reflection — pairs well with opener Thomas A. Minor & The Picket Line (Friday, 8 p.m.). The following day, bluegrassers Iron Horse do for Metallica and Black Sabbath what The Gourds did for Snoop Dogg (Saturday, 4 p.m.). For a full weekend of Dude, a limited number of passes to both the Garden Party and Bowling Party are $30 (cash-only) at WHY Louisville. —Mat Herron

Have you ever wanted to watch 14 of the best films in history, in the best room in the city? Good. You’ll be happy to know the Palace Theatre is launching its annual Classic Movie Series this weekend, the sole focus on Alfred Hitchcock. It starts Friday with a screening of “The 39 Steps” (1935), followed on Saturday by “The Lady Vanishes” (1938). The series will feature two classic Hitchcock films every weekend for the next seven weeks, wrapping up with “Psycho” (1960) on Aug. 27 and “The Birds” (1963) on Aug. 28. All shows begin at 8 p.m. and are $5. Check out descriptions of all the films in this year’s series here. —Brent Owen

For a crime that’s been outlawed in this country for more than 150 years, slavery is still a booming business. That’s why 15 intrepid cyclists are biking the 1,800-mile route forged by the original Underground Railroad to raise awareness of the plight of trafficked men, women and children who pass through Louisville, Cincinnati and beyond. The cyclists will arrive from Elizabethtown at 1 p.m. Saturday for an informative respite at the Ali Center, where you can learn more about modern-day slavery — and what you can do to help — from the event’s organizers, the International Justice Mission, and members of Louisville’s Catholic Charities. Also on hand will be recording artist Enric Sifa, a survivor of the Rwandan genocide. Free food will be provided at the event. —Jonathan Meador

Astronomy at the Falls

If you’ve ever wanted the opportunity to really see what’s behind the clouds, here’s your chance. The Louisville Astronomical Society’s Sidewalk Astronomers will set up their telescopes at the Falls of the Ohio Saturday night to give visitors safe, filtered views of the setting sun, the stars and the planets.

This viewing will enable visitors to catch a glimpse of sunspots, craters on the moon, the rings of Saturn, an up-close look at Venus, and much more. Clear your calendar and hope for a clear sky (if it’s overcast, the event will be cancelled). —Whitney Spencer

Yardsale, Louisville’s self-proclaimed “second most rootin’-est, tootin’-est band,” will be hanging up its boots and spurs following a final hurrah Saturday at the Vernon. Several of the band’s members will be moving on to other endeavors that will take them out of the area, bringing Yardsale’s seven-year run to a halt. The band’s most recent album, Knock Alley West, and its Exile-era Stones vibe got great press and actually found some fans in the U.K. and the Netherlands (huh?) this year, but the final roundup has unfortunately arrived. So expect a classic high-energy Yardsale show, along with sets by the Young Republic and the Avery Set, and possibly a surprise or two. Oh, and since it is Yardsale’s farewell show, naturally you get a discounted admission of just 6 bucks if you dress like a robot. That’s right, a robot. Why do you look so surprised? So long, Yardsale. Happy trails. You will be missed. —Kevin Gibson

“I always knew I had a reckoning coming,” says Peter Case, and it’s hard not to call that a blues lyric. Growing up in east Buffalo, his musical education came in the form of Muddy Waters and Bo Diddley shows at The Governor’s Inn, a haven for blues diehards, because the crowd was mostly native Mississippians who had migrated to the Auto Belt for jobs. As his own career progressed, Case developed blues fever in his blood, along with something else, and last year’s post-tour reward was an emergency double bypass. He knows he’s lucky: “Both my grandfathers died before they were in their 60s,” says Case, 56. Doctors have given him a “pretty clean” bill of health, and he no longer tours like he’s 25. “I got back in shape, and I feel pretty good.” New album, Wig, is out now. Will Kimbrough opens. —Mat Herron

There’s no denying Stephen Rolfe Powell has been influential in the Kentucky glass art scene. It all started about 25 years ago when Powell, then a ceramics and sculpture teacher at Centre College in Danville, Ky., decided to build a glass studio. Powell has been on the glass ride ever since, taking with him a number of artists who, in turn, have become influential in their own right.

“Centre College & Friends” showcases work by 20 of his students, selected by Brook White, owner of Flame Run, and Powell. “This is a chance to highlight the impact Steve Powell’s students are having on the glass world,” says White. “I want to pay homage to what he and Centre College have done for glass art.” Flame Run also is showing glass by Ben Edols and Kathy Elliott. —Jo Anne Triplett

‘Under the Knife’ by Janis Kirstein

“I created the small drawings in this exhibition while lying down in my bed, flat on my back, the only position I could find that wasn’t unbearably painful.” Thus begins Janis Kirstein’s artist statement. It’s no wonder she relates to the traumatic life of painter Frieda Kahlo. Kirstein was diagnosed with advanced degenerative disc disease, which called for emergency spinal surgery. She says she began painting “literally like there was no tomorrow … As I discovered the necessity for emergency surgery, I had to decide whether to cancel this art show. I chose not to cancel. Thus these paintings became my source of motivation and my testimonial to the essential necessity of the creative act for the nourishment of the human soul.” Zephyr Gallery also is featuring a member group show. —Jo Anne Triplett