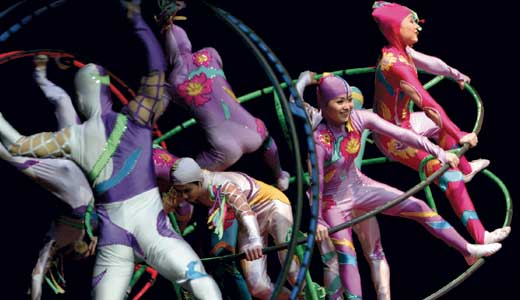 Wednesday night finds soul songstress Teneia Sanders making a long-awaited return from Arizona. However brief or extended her stay is, it’s worth catching. Jenn Stout offers up a preview of her forthcoming solo album, due out next month on Red Corduroy Music, while Alanna Fugate and Andrea Davidson give more from their latest works, Pink Elephants and Retracing Steps respectively. Elephants features guest appearances by Ben Sollee, and Davidson has an all-star cast (Mauriece Hamilton, Karston Nelson, Peter Searcy), too, but the ladies cut to the quick just as effectively (and probably more so) on their own. —Mat Herron

Sarah Hyland is a Louisville native who is returning to town this weekend to perform at Comedy Caravan with comedian John Fox. After graduating from Assumption, she attended art school in Chicago, where she worked at Second City and Zanie’s. With the encouragement of many of the comics around her, Hyland made the leap to Los Angeles, where she was cast on Ashton Kutcher’s celebrity prank show “Punk’d.” There’s also a bevy of clips on YouTube where she plays whacked-out characters like La Sarah (a rapper), Kentucky Lightning (a mullet-toting athlete) and Paris Hilton. Don’t be misled by her adorable, exterior, though: “I don’t look like I’d be counter culture. But on the inside … I’m dying … dying! There’s wizards and shit in there, believe me.” For our full interview, visit www.leoweekly.com. —Brent Owen

Jonathan Swanz is heading off to graduate school in Hawaii and has to clean house. That’s good for us. When asked what will be for sale, Swanz says, “There will be a survey of work from the past four years, including new work that was made for the (Glass Art Society) conference in June, and a few pieces yet to be shown. All work will be priced very reasonably, as I hope for it to find homes.” And, of course, his signature production piece, the Swanz wine decanter.

But don’t worry — he’ll be back. “I will keep my studio in Louisville, as I love this town. I think of it as my hub. I have been here for six years, and both cultivated community and felt the support of the community.” —Jo Anne Triplett

“Eh, hosehead, once you get there, you can have all the free beer and sausages you want,” says Bob McKenzie in the 1983 comedy “Strange Brew.” Although there’ll be no sausage, and you’ll indeed have to pay for your stouts and pilsners, revisiting Rick Moranis’ film debut at the Louisville Beer Store on Thursday won’t cost you a dime (or a loonie, to use the McKenzie Brothers’ Canadian parlance). Moranis wrote and directed the film with co-star Dave Thomas (Doug McKenzie), a fellow SCTV alum. The eternal Max Von Sydow, whose own debut was in 1949’s “Bara en Mor,” plays the bad guy. The screening will be held on the patio if weather permits. —J. Christian Walsh

Now, what would be the music for an ideal summer concert? Perhaps a light orchestral work? A skittering solo? Maybe a classical symphony to cap the evening? Then along comes the final edition of the Louisville Orchestra’s Summer Classics series — with an indoor show Thursday night at Ballard High and an outdoor show Saturday night at RiverStage in Jeffersonville. The show begins with the picturesque “Grand Canyon Suite.” In composer Ferde Grofe’s notes, a part of “Cloud Burst” is a scene called “Distant Thunder with Crickets Chirping.” Next on the bill is the “Bruch Violin Concerto No. 1,” with young Louisville violinist Joy Kim making her debut with the symphony. The program concludes with Brahms’ “Symphony No. 3.” Jorge Mester conducts. —Bill Doolittle

The country’s leading troupe of traditional Chinese acrobatic companies will bring their award-winning show to the Iroquois Amphitheater Friday night. The 21-member company from Xian, China, will showcase their amazing skill and striking choreography for a show perfect for the whole family. Offering a representation of some of China’s most time-honored traditions, dancing, spectacular costumes, and ancient and contemporary theatrical techniques, the show is sure to be entertaining. This is an opportunity for Louisvillians to experience an art form that has captivated audiences on five continents, in 65 countries and all 50 states. —Whitney Spencer

Institutional knowledge matters, and for 10 years, Woody Chancy has enhanced yours. To listen to his nighttime journey “Woody’s Roadhouse” on mighty fine 91.9 WFPK is to walk away wiser about rock ‘n’ roll’s origins. He doesn’t relegate his repertoire to the booth, spinning weekly, first at the Monkey Wrench, then Maker’s Mark, and now at Mag Bar. In an era when radio is inching away from tastemakers, and everyone with an iPod uses the term DJ, Woodrow’s longevity is worth celebrating. Chancy’s faves The Broken Spurs, The Ladybirds, King Sonic and fellow wax-head Matt Anthony chime in. Come on down and work it out. —Mat Herron

There’s something intriguing about partying on the roof of a tall building. The lights of the city mix with the sky’s flickering orbs and passing UPS planes to create an intoxicating atmosphere of mischief and delight. The Fairness Campaign will tap into this energy at the second annual “Fairness Over Louisville” fundraiser on Saturday, taking over the rooftop of the Frazier History Museum. There’ll be music, dancing, mingling, a cash bar and guest speaker Contessa Brewer, an MSNBC news anchor. Brewer will speak about the importance of a statewide anti-discrimination law. “She’s a very public personality who has taken a bold stance on LGBT issues — stating that lesbian, gay, bisexual and transgender rights are civil rights,” says Fairness Director Chris Hartman. —Sara Havens

Olivia Henken is living one of those “local girl makes good” stories, and if you’re headed to HullabaLOU at Churchill Downs on Sunday, you have a chance to be part of it. Henken was selected out of hundreds of entrants from around the country in the festival/LEO’s “Hey Bands” contest to be a HullabaLOU performer on the Fleur de Lis Stage at 1:30 p.m., and she’ll be opening for some pretty high-profile acts. “Words cannot describe how thankful I am for this opportunity,” says Henken, 21. “This is the biggest show I have ever been able to play, and I cannot wait to share the stage with legends like Dwight Yoakam and Loretta Lynn.” To make it an even sweeter Sunday for Henken, the show will mark the limited release of a five-track EP of original songs, including her tune “DerbyTown.” Catch her while you can, if you know what I mean. —Kevin Gibson

Local author Susan Coventry says she’s a Jersey girl at heart, but the subject of her debut novel is much further afield. Coventry writes historical fiction, and “The Queen’s Daughter” centers on one of the children of that famously feuding royal couple Eleanor of Aquitaine and Henry II. The teen princess Joan is being married off to one of 12th-century Europe’s power players, and she’s torn between familial loyalty and love. Coventry has fashioned the book to bridge young adult and adult audience appeal, as she’ll discuss at her reading/signing at Carmichael’s.—T.E. Lyons

Taiwan may seem like another world from Kentucky, but the “Extreme Sensibility” exhibit will show you we’re not so different. It showcases video art from 15 young Taiwanese artists, providing a glimpse into their everyday realities. Themes include identity, gender, politics, environment, urbanism, as well as traditional ideas such as family and religion. The artists’ attitude toward video is striking, using the medium as a tool for expression — each gigabyte is a sheet of blank paper, each second is a brush stroke. A reception with curator Charles Lui and some of the featured artists will be held on Aug. 29. —Rosie Haney

It’s a solid group show, but I have to single out one artist in particular: Bruce Riley’s stepping stones of vibrant color flow, in lava lamp fashion, from one ameba to the next. It’s trippin’, man. There is a reception Friday, Aug. 6, at 5 p.m. with music by Black Rabbit Moon. —Jo Anne Triplett