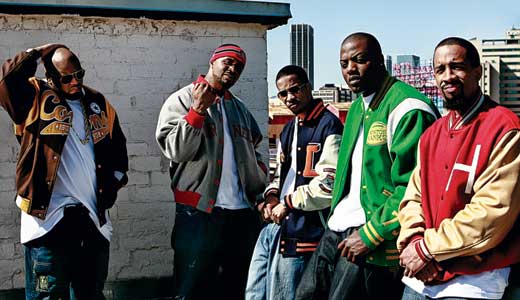 Ever since “Po’ Folks,” the hit single from their platinum debut, Watermelon, Chicken & Gritz, Nappy Roots have excelled at their everyman personas. On their fourth, Pursuit of Nappyness, solid drums, acoustic guitar and piano stew at 90 beats per minute. One can argue whether the emcees are by nature introspective, or if the chosen accompaniment favors reflection.

“That’s where we’re at, more than we’ve (ever) been,” B. Stille says. “Before our first album, we were below poverty. Second album we had money. This album, we’re living life as men, just making a living for our families. We speak on it better than we ever could.”

Always the most humble men in the room, the guys twice thank their fans with dedication songs (“All for You” and “The People”) for their decade-long career.

Pursuit is their second national independent release after leaving Atlantic Records. Being in control of their careers — choosing producers, singles, promotion — Nappy Roots are, like many acts today, using social networking to market their albums directly to fans. Twitter and Facebook are “where the game is at right now,” Skinny DeVille says.

The difference from the Atlantic days, B. Stille says, is that “majors are good because of the exposure. At the same time, (independently) you may never have a video, but you’re still selling your record. The opportunity is there. It’s wide open for whatever.”

Atlantic “gave us our fanbase,” Fish Scales adds. “We built it with good music and our grind on the road. I’m thankful for that.”

Deciding which song — even which verse — makes the cut is a negotiation among the five members.

“Songs fit around here,” Big V. says in a drawl ideal for narration. “If it ain’t shit, it really won’t survive. We’re probably our biggest critics. It’s a competition to make it the best song it can possibly be. You’ve seen the Temptations movie, right? ‘Would you buy that sandwich or that song?’ If you don’t buy that song, it’s time to do another one.”

Following Pursuit of Nappyness, each member is finding time to work on side projects. Fish Scales and Skinny DeVille have teamed as 40 Akerz. And there’s a broader mission: Signing acts to Nappy Roots Entertainment Group.

“The city of Louisville has so many tremendous and talented artists, from R&B to rock to country to hip-hop,” B. Stille says. “I’m actively looking.”

“I’d like to do more with people who are doing it … worldwide,” Skinny says. “And we can bring something back that’s bigger than just hip-hop: It’s bringing back good music.”