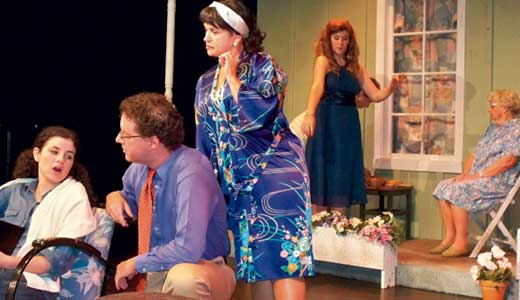 William Inge is a beloved American playwright, and one of his most captivating and memorable plays is “Picnic,” for which he won the Pulitzer Prize. Broken into four scenes in two acts, “Picnic” tells the story of a small Midwestern town getting ready for its annual Labor Day picnic. The play opens by introducing the central family: Flo Owens (Grace Poganski) and her daughters Madge (Carrie Cooke), the town beauty, and Millie (Victoria Barnes), a tomboy. They have a renter, Rosemary Sydney, and share a backyard with Helen Potts (Carolyn Holbrook). The morning begins when Mrs. Potts offers breakfast and a little work to Hal Carter (Jeff Ketterman), which changes all of their lives forever.

To summarize a play like “Picnic,” one gets the impression that it’s simplistic, but that is not the case. The play deals with longing and heartache, loneliness and risking everything to be with someone
you love.

One of the reasons Inge is such a masterful playwright is because he writes a tremendous amount of depth into seemingly simple situations — a small town getting ready for a picnic, for instance. His language is realistic, but there’s more there than what is being said, which makes his plays more complex than people expect. Of the cast in The As Yet Unnamed Theatre Company’s production, it’s Poganski and Ketterman who’ve embraced the language. Their lines sound natural and their subtext understood without over-acting for the audience. That said, Victoria Barnes is quite charming and Sandy Richens Cohrs (Rosemary Sydney) does well providing comic relief. Cohrs also helps to ratchet up the tension by the end of the first act and starts the second act with a necessary energy.

Early in the play, there are moments when it seems the entire cast is onstage and various conversations and scenes are going on simultaneously. It’s a difficult scene, balancing the energy, the focus, listening to a cue from someone across the stage while appearing completely transfixed on another. Because of this, there are moments when the story lags and the performances feel stilted — when it seems like the biggest focus is on getting the cues right (which is, of course, important) rather than fully committing to the performance. Things run much more smoothly when fewer characters are onstage.

Gary Tipton’s set is simple and sweet, projecting the feel of the shared backyard. It creates many different playing areas, which works well, especially for the scenes with so many actors in the mix. With all the space and levels, there are quite a few moments where the actors seem constrained in their movements. But for having such a large cast, and so many storylines, they do pretty well to get the point across to the audience.

Despite some great individual performances and moments, The As Yet Unnamed Theatre Company’s production stumbles a bit overall. But William Inge’s “Picnic” is a beautiful play, which shines through nonetheless.

A production by The As Yet Unnamed Theatre Company. Directed by Gary Tipton. Continues through July 25 at the Kentucky Center’s MeX Theatre, 501 W. Main St. For more information, visit ayutc.blogspot.com/ or call 584-7777.