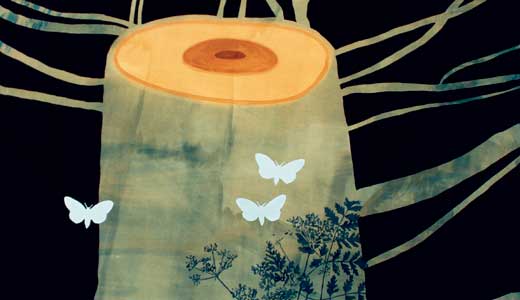 Casey Roberts is a man consumed by wilderness. Capturing vignettes of backwoods solitude like butterflies in a net, Roberts’ small-scale cyanotype paintings are as delicate and nuanced
as haikus.

For his upcoming show at the 930 Gallery, Roberts has produced a number of small-scale landscape paintings, an act of discipline considering the vastness of his subject matter. Using a method that curator Michael Winters — in an effort to relay the difficulty of the time-sensitive process — referred to casually as “painting blind,” Roberts works with a Civil War-era controlled chemical process, cyanotype, to develop his quixotic, textured indigos. He then adds watercolor and collage elements to complete his compositions.

Roberts doesn’t always work on such a small scale. Some of his larger paintings are the size of kitchen windows and feature recognizable motifs, both psychological and geographical. In “Motherlode II” (2006), Roberts’ color scheme evokes the blue drench that precedes dawn in the mountains and the empty anthill eeriness of the landscape in the wake of coal mining. In “Heavy, Heavy Flow” (2008), tree stumps as vulnerable as open-faced sandwiches stare out of the landscape, shedding baby blue tears. In his artist statement, Roberts explains, “My work illustrates a fantastic landscape. It represents nature’s subtle way of dealing with the peculiar aspects in the relationship with mankind.” Viewed together, the paintings make up a chorus of anxious, solitary confessions about environmental degradation and modern material consumption.

In addition to his exhibition, Roberts also will host an artist workshop on photochemical processing, which, he admits, he was turned onto by his girlfriend as an economical alternative to the considerable overhead investment in screen-printing. “We are going to be using household materials like peroxide, bleach and baking soda to create the reactions,” he says.

“We really wanted Casey back,” says gallery director Winters. Having last shown in Louisville in 2008, Casey is fresh off a two-person show at the Indianapolis Museum of Contemporary Art last fall and a solo show at Walker Contemporary Gallery in Boston this spring.

With Winters’ encouragement, Roberts will debut some new compositions inspired by the Gulf Coast oil spill. All proceeds from the sale of those paintings will go to relief efforts in the region.

‘A forest, and the biggest thing possible’