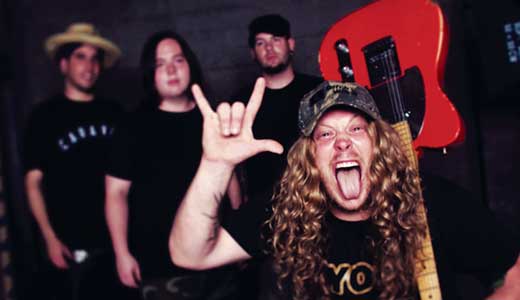 The Glasspack will celebrate its 10th anniversary with a show at Zanzabar Aug. 21.Photo: Ron Jasin

One day in New Orleans, “Dirty” Dave Johnson, the lead singer of The Glasspack, saw a street performer who fascinated him. The man simply stood on a soapbox for hours in the same position with both hands in the air. “There was all of this stuff going on around him,” Johnson remembers. “All of these jazz players were on the street and all of these other guys doing things to try and get a dollar. And this one guy was just standing on a soapbox with a bucket in front of him. He was just holding up his middle fingers to the sky for hours, and he had more money than anybody else. I thought that was the coolest thing I’d ever seen. He really inspired me.”

Johnson, 35, took the lesson to heart. On Aug. 21, The Glasspack will celebrate 10 years of flipping the bird to the world with a show at Zanzabar. The Glasspack is the little band that could, and Johnson has been the glue that held it all together as the main songwriter, booking agent and manager. Despite a revolving door of musicians and the ups and downs of the music business, Johnson has managed to keep going.

LEO talked with Johnson and a few of his collaborators to get the lowdown on the band’s past and present. Johnson says the upcoming 10th anniversary show will feature a new incarnation of the group as well as old members. Planning for it has caused him to take stock of the band’s legacy.

“I was just saying all the things a guy in New Orleans on a soapbox would say into a megaphone,” Johnson says. “People try to say, ‘You’re so successful, you’re a rock star.’ I don’t feel that. If I was a rock star, I’d be able to survive without washing dishes. I washed dishes for 20 years. So, it’s weird for someone to say I’m successful. You could say it in relative terms. Some bands never make it out of the garage. I guess I’m successful in that sense. But I’ve got nothing — nothing but a guitar.”

Johnson grew up in the South End listening to Black Sabbath, AC/DC, Van Halen, Jimi Hendrix and Creedence Clearwater Revival. It was enough to get him started. When he was 12, he and his friends used a broom to play imaginary solos along with their rock heroes.

“When I was 13, I asked my dad for a guitar,” Johnson says. “I’m left-handed, but he couldn’t afford the left-handed guitar because it cost more. So, I learned to play right-handed, which gave me a stronger hand on the neck and weaker wrist with the picking hand.”

When Johnson was 15, he discovered punk rock. He listened to Kinghorse, the Misfits and Mudhoney. He formed a band with friends, but he wasn’t a good enough guitar player, so they made him play bass. One of the various punk outfits he played in was Blacklisted, which featured drummer Brian Foor and guitarist Andy Garrett, two of his frequent Glasspack collaborators. During this period, Johnson’s life got darker when his mother died. That’s when he turned to the blues.

“In 1999, I started playing guitar by myself a lot, and I was playing a lot of John Lee Hooker. I learned to play guitar and sing. I started learning blues scales. I already knew punk rock. I was real fascinated with John Lee Hooker and the Didjits. They were both from Chicago. What I was trying to do was take some punk rock and mix it with the blues.”

Johnson and Foor started jamming in a house across the street from Manual High School. They’d go up to the top floor and turn Johnson’s guitar up to 10. That’s how he wrote the first two Glasspack songs, “Smut” and “Shut Up and Ride.” With the addition of Chris Matthews on bass and Garrett on guitar, the band was born.

“When we started playing, people started calling it stoner rock, but to me it was always punk-blues,” Johnson says. “It was fueled by Black Sabbath and stuff like that.”

Johnson soon found his musical prospects being fostered in an unlikely place. He got a cleaning job at the Mercury Paw, a short-lived indie rock club owned by Mia Frederick. Johnson hated the patrons at the Mercury Paw — he and Foor referred to them as “coolies.” He thought they were trust-fund babies posing as artists. Worst yet, Johnson had to clean the toilets for them and mop up their vomit and spilt beer. He put his feeling about that crowd into the blistering song “Demolition Derby.”

“‘Demolition Derby’ is the most hateful Glasspack song ever,” Johnson declares. “That was written to the indie crowd. I was mad. Don’t care if this song sounds like the rest/Hope it makes your ears bleed bitch/Don’t care if this song goes on too long/In my head it goes on and on … There is one line in there, Don’t care about your trendy, trendy scene/Hope this song shatters your black-framed glasses … That, like, totally says it all right there.”

The Glasspack’s first big show was an assault on the coolie crowd. When Johnson heard the art rock group The Frogs were coming to the Mercury Paw, he told Frederick it was his favorite band. His plan was to play the three Glasspack songs he’d written so loudly that people would actually leave the club. It didn’t work out that way. The crowd loved it, and The Glasspack developed a reputation as a must-see live act.

“The shows in Louisville were crazy between 1999 and 2001. We should have been playing behind chicken wire,” Johnson says. “Every show was madness. There were bottles flying everywhere. Supposedly we helped contribute to Sparks going out of business. We played a show, and some chick got her vein cut in her wrist and had to go to the hospital.”

During this period, thanks to friends like BMX racer Jimmy LeVan, The Glasspack was getting gigs in places like Texas and New Orleans. The band recorded a demo that eventually made its way to Frank Kozik of Man’s Ruin, the label responsible for Queens of the Stone Age and Hellacopters. Kozik asked the band to record a 7-inch, and he liked it so much that he wanted a full album.

American Exhaust was recorded shortly thereafter. Unfortunately, Man’s Ruin went out of business before Kozik could release it. Stuck with an album and no label, Johnson took out a personal loan at 35 percent interest to press 1,000 copies on his own Riverrock label. He secured European and Australian distributors, and all the records were gone within a year. The success captured the attention of Detroit’s Small Stone Records, which was scooping up a lot of Man’s Ruin bands.

The Glasspack recorded its second album, Powderkeg, for Small Stone over two weekends at the Museum, a building on Main Street. Before the record was released, the band planned a three-week tour that ended in chaos. Then-bassist Dave Wright had to quit after the first show in Memphis for health reasons. On the way to New Orleans, the band almost died in a truck accident.

“I was in the passenger seat, and Dave and Rico were in the bed of the truck,” says former drummer Brett Holsclaw. “We had a topper on the bed of the truck, and sleeping bags rolled out. It was the middle of the night. We were headed to New Orleans. I hear the tires on the emergency lane. Andy Garrett was driving. It scared me because I was kind of sleepy, too. I was like, ‘Wake up, motherfucker.’ He is an over-the-road driver, so he knew how not to panic. We also had a trailer attached to the back. The whole jackknife thing started to happen in the grass.”

Eric “Rico” Rakutt, The Glasspack’s longtime road manager, says all of the band’s money was in a tobacco tin that flew out of the truck in the commotion. They were tracing their path in the early morning, picking up bills here and there. He says they got most of the $700 back.

“I remember getting out of the truck and seeing a sign that said, ‘Welcome to Hope, Arkansas, home of Bill Clinton,’” Rakutt says. “It’s 6 in the morning, and we’re searching the road for our money. It was crazy. I’ve never been able to sleep on a road trip since then.”

Holsclaw quit the band during the Powderkeg tour. It was the first of several stints for him in the band. Johnson says Holsclaw leaving caused the band to miss a spot at the South by Southwest Festival and cut some of their momentum.

“I’m not sure if Dave’s stubbornness kept The Glasspack from blowing up or my quitting,” Holsclaw says. “The only reason I joined the band, and considered re-joining the band those other times, is that Dave’s a go-getter. He was hungry for it. He wanted to make the band happen. Everybody else I was playing with before The Glasspack just wanted to make art.”

Powderkeg was released in 2002, a year after the band toured for it. This type of bad timing would become a common theme with The Glasspack. Each of their major tours took place before their new album came out. Sometimes there was a year difference between the tour and the album.

The Glasspack recorded The Road Warrior EP without Holsclaw, but he came back for the band’s next Small Stone release, Bridgeburner. This record was recorded in Detroit at Rustbelt Studios, which is co-owned by Kid Rock. At this time, The Glasspack was in a state of disarray.

“A few weeks before the recording, I had hurt my hand by slamming it at the skate park,” Johnson says. “My thumb swelled up huge right before we were going to the studio in Detroit. Around that time, (bassist) Mark Moody started having problems. He was losing some of his motor functions. He later found out he had MS.”

Because of the personnel and physical problems, there are a lot of special guests on Bridgeburner. Moody actually played bass on just one track. Johnson and Holsclaw laid down the basic tracks, then guest musicians filled in. Small Stone label chief Hamilton even plays guitar. None of the members of The Glasspack is happy with the album, calling it too psychedelic and overproduced. Ironically, the record became a big seller in the Netherlands and Germany. In 2007, The Glasspack played a sold-out show at the Roadburner Festival in Holland. But for most of 2005 and 2006, after Bridgeburner, The Glasspack was a one-man band. Johnson would pick up musicians for a show here and there, but most of the time he was focusing on side projects The Dirty Bird and Muddy Nasty River. But The Glasspack’s music was continuing to gain popularity. The band’s music appeared in MTV’s “Viva La Bam,” the biker show “Sons of Anarchy,” and in several videogames.

In 2006, Johnson decided to record another Glasspack record. Dirty Women is named after a Black Sabbath song, and it was done at Downtown Recording. Johnson considers it his best work to date. After the recording, he stopped focusing on music to attend school at the University of Louisville. But the 10-year anniversary has breathed new life into Johnson. He has a new lineup, and he’s even started writing songs for a new album.

“Dave is tough, he just keeps on rocking,” Rakutt says. “Dave really sat down and studied the history of rock. He went back to something and decided what he wanted his band to be, and he’s stuck to it for 10 years. The Glasspack makes you feel like you should be driving down the road at a 100 mles per hour sipping whiskey.”