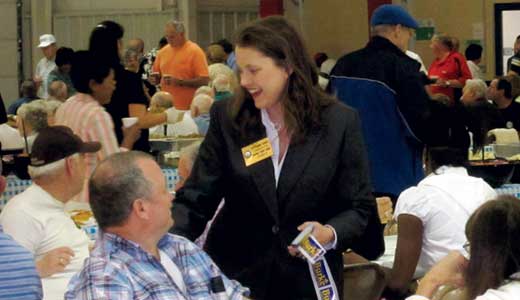 For Jefferson County District Court judge candidate Stephanie Pearce Burke, the restrictions associated with running for a spot on the bench have not made campaigning more difficult. In fact, the 41-year-old defense attorney says the longstanding regulations rightfully required judicial candidates to focus on their qualifications rather than politics.

But a recent federal court decision could change that, bringing political views to the forefront in Kentucky judicial races.

Last week, the U.S. 6th Circuit Court of Appeals paved the way for judicial candidates not only to solicit campaign funds personally, but also to make political statements and run under a party banner.

“Now voters are really going to be asking those types of questions, and judges should not be out there playing the political game,” Burke says. “It puts (judicial) candidates in a bad position. The ethical rules are much different for us, and those guidelines are now in direct conflict with this new ruling.”

In 1975, the Kentucky Supreme Court made judicial races in the bluegrass nonpartisan by instituting new rules of conduct, including barring candidates from identifying with a political party, soliciting funds without a committee and making political statements.

“Elections are elections, and the same First Amendment applies to all of them,” Sutton wrote on behalf of the three-judge panel that issued the ruling.

Supporters of Kentucky’s Judicial Reform Article of 1975 argue the law has prevented potential judges from being beholden to corrupting political interests. The law’s longtime critics, however, contend the reforms infringe upon a candidate’s rights.

Although the federal ruling declared Kentucky was indeed violating judicial candidates’ freedom of speech, the court did order a lower court to examine whether sitting judges and judicial candidates can offer specific positions on issues, but made it clear that concerns about impartiality should be handled after the elections — not before.

“A state cannot simultaneously insist that judges be held accountable to the electorate at regular intervals but deny to sitting judges and candidates alike the communicative tools for explaining how they will be held to account,” Sutton wrote.

Despite the federal court’s declaration, Kentucky judges and would-be jurists are not expected to immediately begin trumpeting their political views to the public. For many, the ethical rules established by the state outline a clear path for sitting and would-be judges to remain impartial while running for office.

“Just because you can do something doesn’t mean you should. We’ll just have to see how people decide to handle this ruling,” says District Court Judge Sadiqa Reynolds. “The issue is that people feel they’re being treated fairly and there is no bias against them. And I don’t understand how you knowing my political party or me knowing yours will help with that.”

In the absence of restrictions on political campaigning, some fear judges could be chosen based on the political whims of the electorate and particular interest groups.

“It’s important that people understand that if you’re in my courtroom, I don’t care if you’re a Republican or a Democrat. I care that you’re treated fairly,” Reynolds says. “Whatever your party affiliation, it is not what’s important to me.”

For over a century and a half, the commonwealth has elected judges by popular vote after yanking the power from the governor, who originally made judicial appointments. In 1975, the state’s high court added further restrictions to keep the judiciary independent from the stain of politics, but federal court decisions across the country are increasingly giving judicial candidates the same rights as contestants in other political races.

For instance, in 2002, the Republican Party in Minnesota filed a lawsuit contesting certain campaign restrictions in judicial races. The U.S. Supreme Court ultimately heard the case and ruled that states couldn’t forbid judicial candidates from discussing their political views in campaign advertisements.

The recent federal ruling from the 6th Circuit in Cincinnati is the result of a challenge filed by former Kentucky Supreme Court candidate Marcus Carey, a registered Republican who filed a lawsuit protesting the state rules in 2006.

The former judicial candidate tells LEO Weekly the ramifications of the federal ruling won’t sully the judiciary, but instead will result in informed voters making better choices at the polls.

“The old system was knowing full well judges had certain bias, prejudices and opinions. The voters who find those beliefs to be important in making their decisions, however, were deprived of that information,” Carey says. “An individual candidate can choose to have a discussion another will not. And that’s part of the freedom of the First Amendment.”

Carey admits there could be those who abuse that right, but he suspects the public will react adversely to judicial candidates who aren’t prudent with their comments. Still, the ruling will change the discourse and provide more information to voters, he says.

Chief Justice John D. Minton Jr. will not comment on the recent federal ruling specifically, but says the decision will change the way states like Kentucky regulate judicial elections.

“The commonwealth has taken steps to try to minimize the impact of politics on judicial races,” Minton says. “These recent decisions are telling us we can’t — as we have for the past 160 years — regulate that speech.”

The federal court ruling might also rekindle the debate about whether the state should return to an appointment process rather than popular elections in selecting judges. Both systems are arguably riddled with flaws, but Minton says a task force could be convened to examine the state’s judicial selection process.

Right now, seven states allow judicial candidates to run with a known political party. The new ruling would keep Kentucky judicial races nonpartisan on the ballot, but allow candidates to share their party affiliation with voters.

“It’s important for Kentucky to avoid the horrors of judicial elections that have existed in other places,” Minton says. “We want the process to continue to reflect the selection of judges in the best possible way. And one of our options going forward will be to gather a group to look at the ruling carefully and think hard about the judicial selection process.”