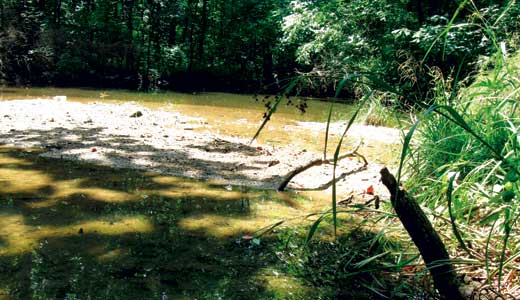 There was a time when Blackacre State Nature Preserve was surrounded primarily by family farms. But these days, Kentucky’s oldest nature preserve is smack dab in the middle of Louisville’s sprawling suburbs, just off bustling Blankenbaker Parkway.

The massive Bluegrass Industrial Park with its 800 or so businesses is located nearby, as are numerous housing developments, a mega-church, a Starbucks
and a Kroger.

As a result, Blackacre’s 170 acres of towering oaks and chestnuts, roaming foxes and coyotes, a working farm with goats and cows, and 18th century buildings are in jeopardy due to a wide range of unnatural causes, from busted sewer pipes washing out ponds to mountain bikers tearing up trails.

It’s a phenomenon that’s unique to urban nature preserves, and it’s something Susan Reigler is hoping can be halted before the damage is irreversible. As the resident biologist for Blackacre, Reigler — a lecturer at Indiana University Southeast and former journalist for The Courier-Journal — has lived in a cabin on the property and studied the preserve since the 1980s.

Those secondary users — people — have been known to misuse the land. Mountain bikers show up on the trails, oblivious to the damage they do and the disruption they cause. A few years ago, a hunter shot a cow on the property.

That’s right — a hunter shot a cow at Blackacre. Never mind the fact that both mountain biking and hunting are prohibited on state nature preserves.

But humans are not the only unwelcome hunters.

In Blackacre, trails crisscross throughout the woodland, giving non-native predators easy access to ground nesting birds, like quail and woodcocks.

It’s a problem Reigler is studying with the use of motion-triggered cameras. On a map of the property, she points out how native predators like foxes, coyotes and raccoons roam freely throughout the woods, whereas non-native predators — mostly housecats — stick near trails when hunting.

This wouldn’t pose much of a problem in, say, Bad Branch State Nature Preserve in rural southeastern Kentucky. If Mittens the tabby cat spent too much time out there munching on little mammals and ground-nesting birds, she’d likely be taken out by a bear or bobcat pretty quickly. In an urban area, where the cats retreat outside the preserve, they can do a lot of damage.

During a recent interview, Reigler took me along one of those kitty highways (i.e., trails) and showed me one of Kentucky’s most widespread environmental problems: invasive plants. One of the main culprits is bush honeysuckle — originally from Asia — which she pointed out along one side of the trail.

“Bush honeysuckle shades out native species,” she says. Where it’s widespread, smaller native trees like dogwoods and red buds tend to struggle. This in turn reduces the fruit that native birds can use to fuel up for migration. Although bush honeysuckle has a berry, it’s comparatively unhealthy for native birds. “It’s like eating Twinkies all summer then trying to fly to South or Central America.”

But perhaps the most immediate problem plaguing the preserve is the destruction and pollution of its watersheds.

The most conspicuous example of change is at the northern edge of the property, where Metropolitan Sewer District pipes carrying stormwater runoff from surrounding neighborhoods run underneath railroad tracks and into the preserve. At some point — and Reigler thinks that it was in the last few months — the water coming through the culvert became uncontrollable. The increased flow created a 6-foot ditch that still wasn’t deep enough to contain all the water coming in from the surrounding blacktop. As a result, the overflow and all the sediment it brought washed out a pond, and has adversely affected several acres of land.

“It’s called Cattail Pond,” Reigler says. “But there are no cattails in it anymore.

Placing her hands about 6 inches apart, she adds, “It’s about this deep now.”

A visit to the pond shows not only that it’s washed out, but also that a trail of stormwater overflow is running into nearby Wick’s Run Creek, a relatively new development that Reigler and some of her students at IUS are studying. If pollutants like lead, brake fluid and motor oil are being brought in with the sediment — which she says is likely — they could ultimately make their way into the Floyds Fork Watershed, the linchpin of the 21st Century Parks project.

In an age of increasing development and suburban sprawl, these problems are occurring more frequently. The water needs somewhere to go, and without greenspace to absorb it, serious damage is bound to occur. And although it’s clear there has been an increase in stormwater runoff, state nature preserve officials and representatives of the Blackacre Conservancy — the nonprofit that oversees day-to-day operations of the land — are reluctant to speculate as to whether nearby parking lots, roads and houses are the problem, or if perhaps a broken pipe is the cause.

It’s a mystery the Kentucky State Nature Preserve Commission and Blackacre Conservancy are working with MSD to solve.

“So far everyone is acknowledging the issue and addressing it in a positive way,” says Joyce Bender, branch manager for the Kentucky State Nature Preserves Commission in Frankfort.

Despite that optimism, even Bender is quick to acknowledge the problems afflicting the state’s oldest nature preserve, without placing blame.

“I’ve been astounded by the changes near Blackacre,” she says. “When we’ve been asked to comment on development (in the area), we’ve expressed concerns about light pollution and the watershed.”

Light pollution, she explains, could disrupt nocturnal animals: opossums, raccoons, mice, bats and other animals that might not seem very exotic, but that are crucial to maintaining the ecosystem.

Regarding the water table, Bender’s main task with Blackacre is to find a satisfactory solution to the culvert overflow, and she says studies currently are under way and that both MSD and Norfolk Southern Railroad — the rail company operating on the adjacent property — are on board.

While the specific problems facing Blackacre were unforeseen decades ago, it’s long been apparent that development would have an adverse effect. In fact, the transformation of the area was the reason Judge Macauley Smith and Emilie Smith donated the land to the Kentucky State Nature Preserves Commission in 1979. It is meant to be a wild space amid an exploding urban center.

These days, it seems the challenge of preventing civilization from encroaching is greater than ever.

“Just purchasing the land is not enough,” Bender says. “You’ve got to take care of it. You don’t want it to be overrun with invasives and ATVs. There has to be active management.”