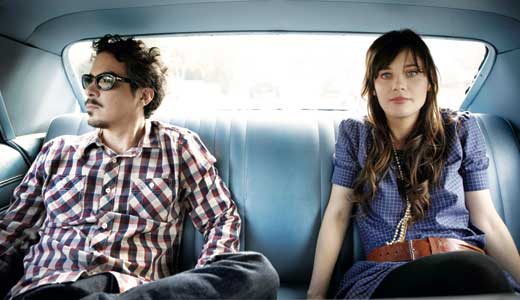 She & Him is the collaboration between singer songwriter M. Ward and actress Zooey Deschanel.

M. Ward has done plenty of singing and songwriting, filling up acclaimed solo records and taking a few turns leading the Monsters of Folk supergroup. But for She & Him, he yields both the central mic and the songwriting pen to Zooey Deschanel. “I just love being able to have the producer/arranger/guitarist role,” Ward says. “Zooey has so many songs, and the heart of each of the records is her songwriting. I’m much more interested in that focus than trying to mess with the system: We both really love the system right now.” In the studio, that system frames Deschanel’s tunes of devotion, determination and despair in arrangements that update girl-group singles or the folk-jangle side of ’60s Britpop. Such careful sonic craftsmanship might seem challenging to wide-open settings like Waterfront Park, but the evidence of some Bonnaroo clips sides with Ward’s quiet confidence. “It was working well in the theaters that we’d been playing. I don’t believe you need to completely change what you’re doing to play an outdoor festival show. I think people appreciate nuances.” She & Him at Forecastle will be Ward’s first Louisville show alongside actress-singer Deschanel, and the pair will be backed by a band that includes The Chapin Sisters. —T.E.Lyons

Davey von Bohlen of the reunited Cap’n Jazz still sounds surprised at how much fun the five group members have had since they began rehearsals for select reunion shows. Fifteen years ago, they were Chicago teens exploring post-punk that has influenced emo bands ever since. But just after the debut of their first full-length album, “the band ended at such a … halt. So I can see how it’d be interesting for people to see us,” von Bohlen says. The fans and the curious are sure to get their money’s worth: At this festival appearance, Cap’n Jazz will play in front of a bigger audience, and for longer, than they ever have before. “I can picture people screaming out song titles and (singer) Tim (Kinsella) saying, ‘There’s no reason to yell. We’re going to play everything.’” Von Bohlen even admits he’s prepared to revisit the group’s odd dissection of A-Ha’s ’80s hit “Take On Me,” though he says performing that might feel like “a cover by a cover band of a band I used to be in.” He’d rather take on his group’s later originals, like the unrecorded “Forget Who We Are,” which was, he says, “an amusing foreshadowing.” —TEL

“To pull together a sound and an image, and all that stuff that goes with being a rock ’n’ roll band — it takes a long time to get it right,” Grace Potter says. The new Grace Potter & The Nocturnals CD is a frequently energetic statement of purpose. So far it’s succeeded at getting the band listed as one of Rolling Stone’s “best new acts,” though they already had multiple discs out and a rabid fanbase established for their live shows. But some personnel changes — along with unreleased Potter solo sessions with T. Bone Burnett that let the singer thoroughly exercise her “earthy and subtle” side — resulted in a slightly transformed band getting re-acquainted with their ready-for-something-new frontwoman. “The fresh start came when I realized that the real me is a loudmouthed crazy girl that wants to enjoy the spotlight,” she says. Hollywood Records loved the refreshed sounds and reconfigured band, and the result was more studio time and the self-titled disc. It’s a few steps closer to mainstream pop-rock than their previous work, which had corralled fans of Americana and the jamband scene. But the musicians feel liberated, Potter says, and often now “instead of the basic rootsy, blues covers, we’ll go into the weird zone.” —TEL

Brash, punk-fueled philosophies permeate The Brutalist Bricks, Ted Leo & the Pharmacists’ Matador debut, and they all flow out of Leo’s dome. “I don’t strive to reinvent the form all that much in my writing,” says the singer and guitarist. “That said, every new iteration of an idea is something new. Even the oldest things (we play) rarely feel nostalgic.” It wouldn’t be a Ted Leo record without political discourse. Leo draws historical parallels to show that, as a culture, we haven’t advanced that much. “Bartolomeo and the Buzzing of Bees” references Bartolomeo Vanzetti. Vanzetti and Nicolo Sacco, two Italian immigrants living in Massachusetts, were arrested in 1920 and executed for a double murder they may not have committed (then-governor Michael Dukakis pardoned the two in 1977). The song references a pamphlet Vanzetti wrote that “asks a series of questions that are pretty provocative and still resonate for anyone living in modern society,” Leo says. “Mourning In America” takes aim at race-baiters during the 2008 presidential campaign. “The amount of coded racism that went on even in the Democratic primary or the more overt Sarah Palin — you’re playing with fire when you play that kind of game,” he says. Obama’s election is no death knell for political rock. “This president is no fucking different than any other president, in most senses. We’re dealing with a government that is so brazenly in the pocket of industry. I’m not saying that there aren’t differences between left and right, but by and large, you’re not going to get a fucking shining knight to come in and clean it up. I’d be surprised if anyone found a lack of things to sing about in the near future.” —Mat Herron

Dave Schools says he’s glad that Forecastle is no longer held “at that place over the parking facility.” The Georgia jamband is returning to the festival soon after releasing one of their strongest albums ever — Dirty Side Down, which was recorded right after the suicide of band collaborator Vic Chesnutt. Memorable tracks include their friend’s bittersweet “This Cruel Thing,” which was salvaged from a pile of Chesnutt’s demo tapes kept by album producer John Keane. Widespread Panic’s lead vocalist John Bell picked up on a bit of wartime historical irony in his winding and winning composition “St. Ex.” For bassist Schools, the band’s upcoming silver anniversary brings back memories from the years before regional summer schedules filled up with outdoor destination/event concerts like Forecastle. “We played several of the European festivals and wondered why there wasn’t one in America. Finally, Coachella appeared, and then more followed. But in Europe, they’re different — every one of them is eclectic.” Widespread Panic maintains its spirit of eclecticism by refusing to cull any cuts as they develop concert setlists. Schools and his bandmates will often dig deep into their repertoire when fans come up and “name a song and tell me, ‘Hey, it’s been a year or two since you played that.’” —TEL