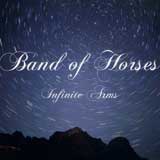 Band of Horses is one of those few bands that make it fun to be a cynical critic, because with every record, you say, “These guys can’t get any better, they can’t get any more original, and it will be impossible to top this.” And amazingly enough, I get surprised with each new album, and my cynicism is crushed by the musical prowess of Ben Bridwell and Co. Their debut The Funeral was a quaint collection of pure originality, the follow-up Cease to Begin felt like the soundtrack to a breakdown, and now Infinite Arms sounds like a band that is proving everything they never had to prove in the first place. Their influences are worn like a badge of honor, with choral accents on “Blue Beard” that sound like vintage Brian Wilson at his Pet Sounds/Smiley Smile-best. And “Older” is an infectious country-rock tune that sounds so classic, I can’t believe it isn’t 40 years old.