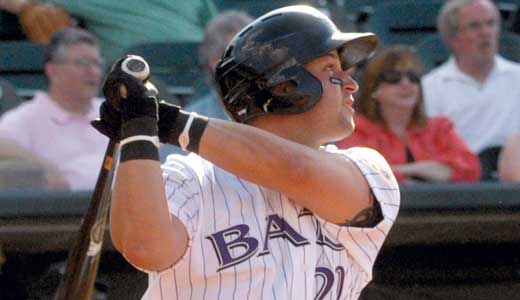 It’s a Louisville Bats baseball cheer ready to happen — as soon as the highly rated prospect Yonder Alonso begins to hit a few more balls out yonder. Or at least hit ’em where they ain’t.

Alonso, the No. 1 draft choice of the Cincinnati Reds in 2008, hit .300 last year, his first full year of professional baseball — shooting from Class A Sarasota, to AA Carolina, ending the season at AAA Louisville — in time for the Bats post-season games in the International League playoffs. That’s a rapid rise, and it might have caught up with Alonso a bit as the 23-year-old first baseman has struggled to keep his average up this season in Louisville. Until two weeks ago, Alonso was hitting just .235, with a measly three homers.

“There are your good days and your bad days, that’s part of the grind,” says Alonso. “It’s baseball, man.”

But then one night in late June, a Toledo Mud Hens pitcher left a pitch just where Alonso thought it might come in, and POW! Alonso sent it way yonder, over the center field wall in the deepest part of Slugger Field.

“A bomb,” Alonso laughs, happily relishing the homer. “He had two strikes on me and came in kind of middle-in, but he missed his spot. So I got him. That’s the name of the game.”

Of course, one well-tagged home run doesn’t swing a season around. But the Bats left town on a road trip the next day, and Alonso was finding his groove. He hit at Norfolk, Va., then tore up Durham, N.C., with nine hits in three games, capped with a grand slam home run.

By the time the Bats got back to town, Alonso suddenly had his batting average up to .253 and was looking for more.

“The thing about Yonder is he loves to hit,” says Bats hitting coach Smokey Garrett. “That’s the thing that makes good hitters, is they love to hit. Love to be up there at the plate. Just can’t wait.”

Louisville manager Rick Sweet echos that sentiment, saying Yonder clearly is a professional hitter: “He’s got a clue what he wants to do — and he’s able to go up there and do it.”

Scouts were attracted to that natural talent, which ultimately led Cincinnati to grab him first chance in the draft out of the University of Miami, where he hit the cover off the ball and led the Hurricanes to the College World Series. The Reds signed Alonso to a five-year deal, and, at his insistence, placed him on their 40-man major league roster. That’s unusual, but the Reds didn’t mind because they knew Alonso had the work ethic to go with the confidence.

With hard work and lots of time in the cage at batting practice, Garrett says the young player is improving.

“It’s catching up to him, and there’s more there,” says Garrett. “He hasn’t gotten it all yet, but he’s getting close.”

Garrett says what young hitters need most is lots of at-bats. More experience. He notes that the things hitters counted on at the high school and college level disappear the higher a player goes in professional baseball.

“I work on it by not getting mad,” says Alonso. “Learning from the process. Being positive and trying to get better each day. You go 0-for-4? Maybe you get two or three picks (snagging hard-hit balls that look destined to be base hits) and help the defense win a game. Run the bases, get a walk here or there to start a rally. Go from first to third. I’m always willing to come out to the park early and work with a teammate who wants to work on something in their game. And that helps me. So it’s been good.”

In all the talk about his hitting potential, it turns out Alonso also is an excellent fielder. During his first game last season with Louisville, he dove to glove a hot grounder, firing on to second base from his knees to start a double play. He’s got a glove.

But hitting is what’s going to make him a success with the Bats, and eventually get him to the major leagues, says Sweet.

“Usually, your very good hitters, when they first start out in professional ball, they start as opposite field hitters, then work their way around,” Sweet says. For a left-handed batter like Alonso, that means hitting the ball to left field and left center.

“I’ve had a lot of them,” Sweet adds. “Joey Votto, Luis Gonzalez, Ken Griffey Jr. All those guys could hit the ball the other way. The power came the more they played, the longer they played, the smarter they got. Then they learn to ‘pull’ the ball with power. Yonder’s on the right track.”

Despite Alonso’s promise at the plate, he might not be called up to the Reds soon because the team is set at first base with Joey Votto, one of the best players in the league.

Perhaps mindful of that, Sweet started Alonso in left field earlier this season. But the manager says he switched Alonso back to his regular position at first base to help him concentrate on hitting. “He was good coming in, but he’s getting better,” says Sweet. “Yonder was a No. 1 draft pick out of college, but it’s different from aluminum bats to wood. It’s a transition, but he’s doing it pretty fast.”

How fast doesn’t seem to be so important to Alonso, who is intent on learning.

And if he catches fire this season in the process of learning? Well, that will be just fine. The Bats have a lot of home games in July, and he certainly won’t mind if fans root for him to “Hit it Yonder.”

“In high school and college in Miami, they sort of messed with my name a little. But lots of Latin names begin in ‘Y,’ so it didn’t mean that much. When I came up here it had a little more meaning to it, and I thought, ‘It’s cool, I like it.’”