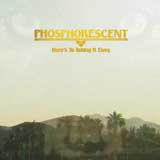 Phosphorescent’s new album, Here’s to Taking It Easy, opens with a curious horn section on the intro to “It’s Hard to Be Humble (When You’re From Alabama)” — and it becomes clear you’re about to go on a musical journey. As the first song continues, it gives you a sense of what I imagine Neil Diamond would sound like if he had any soul at all.

The band is the brainchild of Matthew Houck, who wrote and recorded the band’s 2007 debut Pride on his own. It’s clear that a few more cooks in this kitchen have made this stew sweeter. Their influences scan the spectrum from big band to country to blues to psychedelic and back. They have cleverly woven all of these into a cohesive collection that makes this album a delight from beginning to end. Phosphorescent performs at 8 p.m. July 14 at Southgate House ballroom in Newport, Ky. Tickets for the all-ages show are $12.