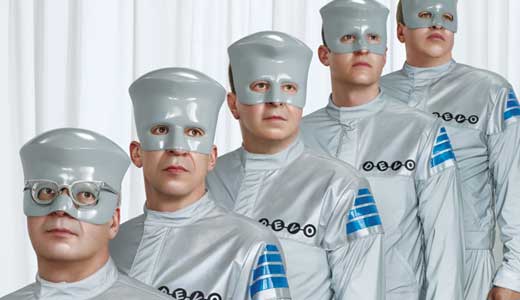 Conceived in 1973, Devo rose up on its own two spools and migrated from the industrial blandscape of Akron, Ohio, to the hills and tinsel of Los Angeles, where they broke new ground and old rules, creating a niche in music history that no one, short of Charlie Darwin or Warner Bros., could have predicted.

It’s been three decades since the cartoon-like men in rubber clothes and flower-pot domes summoned the core of our vulnerable DNA with robotic anthems on corporate greed, evolution, flawed society and just enough sex, drugs and rock ’n’ roll to move records.

The band’s synthetic aesthetic, if you will, drop-kicked the ’80s into playing position for multi-media and merchandising with Devo as the star quarterback.

After the success of techno rants likes like “Whip It,” “Girl U Want” and sci-fi kitsch covers of “Secret Agent Man” and “Satisfaction,” the razor-sharp ensemble wiggled in a sperm-like ascent through alt radio and video charts.

By the time New Traditionalists was released in 1981, with the band singing “Beautiful World,” coiffed in JFK polystyrene toups, the cult was secured. Bands sporting denim and facial hair simply looked like cavemen.

Going on the adage of friends don’t let friends stay in Akron, collaborators and art students Mark Mothersbaugh and Gerry Casale packed up their concept and headed to Hollywood … about the same time as the new and improved Bee Gees, but we won’t go there. Battling descriptions of new wave, performance art and post-punk, Devo managed to squirm through them all and were gleeful to fall through the cracks.

Perhaps Mothersbaugh says it best, excerpted from the Club Devo website: “We grew up in a time when we saw hippies become hip capitalists, when the real punks truly destroyed themselves, and we came to the conclusion that rebellion was obsolete. We saw subversion as the most successful form of change, so we always had an attraction to loaded phrases that you can reshape and subvert to fit your own needs.”

In 1980, I interviewed Casale at his new Warner Bros. home. Clothed in a fashionably sterile look — white trousers and button-down shirt — he seemed like the Good Humor man with a route in Three Mile Island.

Hooking up with Casale over the phone three decades later, I discovered that aside from the years, he had not changed one bit. His duties as chief strategist for Devo include bass guitar, bass synths, vocals and video direction.

Was it you who said something about Devo not being shocking anymore? “Yeah, that was me,” he laughs. “It was — ‘We’re like the house band on the Titanic, entertaining everybody as we go down. We’re all in this together, right?’”

Preaching the gospel of Devolution in a tone of voice that inspires disgust with curiosity, Casale seems to have picked up right where we left off. His and Mothersbaugh’s ideology of corporate greed and the declining status of the homosapien still holds.

“People acknowledge what we forewarned about has actually happened,” he says. “Just look at the gulf — drilling all the way to the core of the earth with no plan of what to do if something went wrong. Saving a few bucks was the interest, not safety.”

How has the capitalistic nature changed since Devo was young and Reagan was in charge? “Capitalism has nothing to do with democracy,” he says, “Money runs everything. Businesses skirting regulation. Now we have this insane dependence on oil … and a fountain of filth spewing out of our ocean.”

As for politics, Casale still finds himself in the middle of all the monkeys, just as Devolution would have it. “I couldn’t even side with Democrats or Republicans,” he admits. “Like Bill Maher, I have an exasperation with humans.”

With their first studio effort in 20 years out on the streets (Something For Everyone), there’s cause to celebrate. It’s not always from a soapbox that Casale and bandmates pontificate.

“I’m enjoying being a wine collector,” he says, “and I teach wine classes, sometimes up in Sonoma or Oregon’s Willamette Valley. And I’ve become a pretty good chef. Food, wine, music … it’s all fairly symbiotic.”

And the day job?

“It was directing commercials until this album and tour, and Devo is my first love and my day job for the time being.”

The rumble of an engine over the phone interrupts. “I’ve got a doctor’s appointment,” he says backing out of a noisy garage. Now, I’m a passenger.

Merging onto the 405, Casale confesses his high cholesterol problem. “A lot changes you physically over the years. For instance, in 1983, I weighed 155 pounds … nice, lean and mean. 2010: 175 pounds. You really have to stay on top of your health when you’re a senior citizen.”

I had to laugh, but if you were born in 1948 and take on national tours where you’re constantly moving in polyfiber jumpsuits, you better be in shape. “It’s athletic out there,” he laughs.

And hot. I asked Casale if he’d ever been to Louisville in the summertime. “No, this will be my first visit ever to Louisville, Ky.”

This made me wince. I explained that Forecastle is an incredible gathering by the Ohio River — free thinkers, music lovers, artists and activists.

Being July, it would be like a progressive Woodstock … with more humidity. So smart clothing would be essential. Doing my best Joan Rivers — Who is Devo wearing for the Something For Everyone tour?

“Me!” he says. “I designed the suits — they’ve got titanium thread woven throughout that makes it super reflective.”

I’m betting he’ll emerge from his silver jumpsuit to find his weight back at the 1983 numbers.