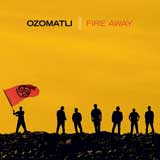 Can a band tighten its grip on capturing its live sound, yet lose its way in the songs it wants to capture? On Ozomatli’s fifth, this seems to be the case. On “Are You Ready” and “Malagasy Shock,” the band nearly busts at the seams to contain its trademark Latino-roots, street-parade vibe. It succeeds sounding both spontaneous and tight, thus capturing its live intensity perfectly. The best song, “Elysian Persuasion,” is a grimy-bass, funk party, ready to please the Prince fan in many of us. Other songs don’t fair so well. Stuck in mid-sequence, “It’s Only Time” is a pretty ballad, but it busts this party’s rhythm and mood, sounding better suited to be an album closer. Maybe an attempt to gain radio appeal, “It’s Only Paper,” co-written with Jack Johnson, sounds, well, like a Jack Johnson retread and a boor by Ozomatli’s standards. A cover of The Pogues’ “Yeah, Yeah, Yeah, Yeah” might work live, but it doesn’t rejuvenate the raucous ride of either the original or Ozomatli’s bests, and “Nadas for Free” reminds me how much I miss A Tribe Called Quest.