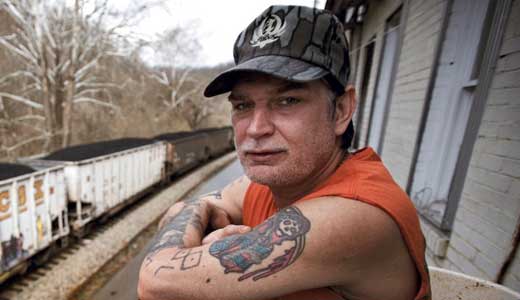 In 1991, PBS aired “Different Drummer,” a series of documentaries that would by now be forgotten if not for the antics of one subject in particular. Jesco White, an Appalachian mountain dancer, would go on to achieve folk hero status, using his tapping feet and a rebel yell to get there. A charismatic criminal and gasoline huffer, White dazzled, charmed and frightened viewers.

“I took the butcher knife and held it up to her neck,” White says, matter-of-factly, in “Jesco White: Dancing Outlaw.” “I said, ‘If you wanna live to see tomorrow, you better start frying them eggs a little bit better than what you’re frying. I’m tired of eating sloppy, slimy eggs.’”

It’s a repugnant monologue and yet, somehow, it only pulls audiences closer. Tom Arnold was among them, successfully petitioning to have White appear on ABC’s hit sitcom “Roseanne.” Rock and country acts like Hank Williams III, the Kentucky Headhunters and Sam Black Church solidified the Jesco myth with musical tributes. Today, White’s cult following comes to a head with the release of “The Wild and Wonderful Whites of West Virginia,” a feature-length documentary that gazes, too straight-on at times, at White’s notorious extended family and their troubles with the law, drugs and child welfare services.

Taken simply as a freak show, “Wild and Wonderful” is hilarious, heartbreaking and nearly impossible to look away from. Director Julien Nitzberg — a Bronx native who, over the course of a two-decade career, has earned some mountain cred — does attempt to squeeze a social statement into this rollicking party: Many mining town families are doomed by the coal industry, entitlement programs and drug use. Yeah, no shit, doubters of the film will say. But, while “Wild and Wonderful” may not present a paradigm shift, it poignantly illustrates dangerous patterns that exist in places like Boone County, W.V.

Still, one man’s glimpse into an inscrutable world can be another man’s exploitation. Early in the film, a defense attorney familiar with the Whites’ ill repute mentions a local boy who’s just been accepted into MIT. “Why isn’t a camera crew following him around,” the lawyer asks. The filmmakers sidestep the question with a cut-away to a stoned Jesco White, wagging his tongue and middle fingers at the camera. It’s an amusing edit, but an issue that will dog some viewers’ experiences.

More than one attendee I spoke with at last month’s buzzing “Flyover” screening wondered: Should we be watching this? Probably. For all their vulnerability and self-incrimination, the Whites are nothing but comfortable in front of the camera. They’re clearly trusting of Nitzberg, who began winning access to this world in the ’90s as a producer on “Dancing Outlaw.” Another family attorney points out the Whites’ savvy, referring to their generations of clever conmen. So, if they come off looking used — by the system, the coal industry, even Nitzberg’s lens — it may very well be that they want it that way.