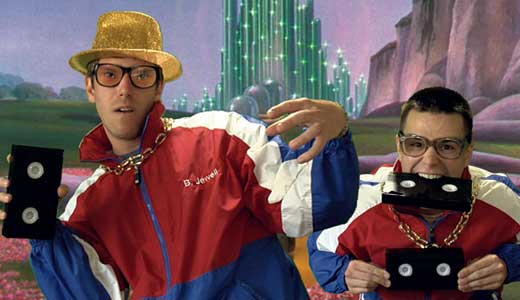 You can star in a movie Friday night. Your supporting cast will feature names like De Niro, Hanks, even a resurrected Judy Garland. You can run with Forrest Gump and away from zombies, box Jake LaMotta, duel in a Spaghetti Western, and play chess with Death itself in Ingmar Bergman’s “The Seventh Seal.”

Through miracles of modern science and the far-reaching influence of Andy Warhol, the Speed Art Museum presents “Fame,” the third installment in its Art After Dark series. In addition to putting visitors, literally, in the picture, the Museum will offer attractions meant to celebrate that most well-known Warholian conceit — “in the future, everyone will be world-famous for 15 minutes.”

Designed to attract new audiences, Art After Dark presents the Speed’s collection in a different light and offers visitors a more interactive experience. Interactive is a good word for Ryan Daly and Andrew Vititoe’s “Super Star Video.” Armed with three laptops, three external hard drives and one camera, the duo will film participants against a blue screen while a real-time editor cuts the captured footage into pre-existing, classic films. Steps away from this operation, a projectionist will screen the video “mash up” within moments of its completion.

Part film director and part DJ, Daly says the mash-up concept came when he and Vititoe were hired to transfer home movies to DVD. The time-consuming process presented plenty of opportunity to hatch projects like this one. “Super Star Video” sprang from an idea to “engage viewers in the dance,” Daly puts it. His allusion to DJing continues when the filmmaker talks about “recycling images and reinventing context,” much in the way a classic beat can take on new meaning when sampled by a modern-day music producer.

The project makes good use of Daly’s background as a “found footage” artist and Vititoe’s technical wizardry. Vititoe designed the work flow, creating hot buttons that allow for instantaneous looping, stuttering and cutting between films with single keystrokes — processes that, in an “analog” world, might take weeks. For his part, Daly will draw from a library of about 100 films when working with each “superstar.”

When speaking of the limitless possibilities open to him with the speed and vastness of digital, Daly says, “In the original ‘Pee Wee’s Big Adventure,’ there was no basement in the Alamo. But with ‘Super Star Video,’ there is a basement to the Alamo.”

The reference to Pee Wee’s search for his stolen bicycle — which was supposed to have been in the Alamo basement — seems fitting for a Warhol-themed evening. Truman Capote once called Warhol “a Sphinx without a riddle,” meaning, the further you unravel him, the more you realize there’s nothing there. That’s one take on the artist, but the legacy of his work and life does endure in countless ways — from Pee Wee Herman’s pop sensibility, to Daly and Vititoe’s appropriation of cinematic legend, to the “Super Star Video” screen-test-like focus on the casual museum-goer.

The camera shy need not be dissuaded from “Fame,” as there’s plenty else to check out. Nico and Lou Reed wannabes can apply their best dead-pan to live band karaoke, which will feature “Hedwig” star Scott Anthony and his band, The Factory Five.

A version of a Warhol Factory also will be in play, with an artists’ collective recreating the infamous ’60s hangout and Pop Art assembly line. The Factory will be complete with its signature Reynold’s Wrapped walls and helium-propelled “silver clouds.”

“And no red sofa, so far,” adds Mindy Johnson, the event’s lead organizer.

Johnson refers to a couch that was photographed so often during The Factory’s silver period that it became legendary — testament to how Warhol could make just about anything famous. In true New York fashion, the abandoned piece of furniture was found on the street and humped up to the studio. Stolen years later, there’s a slim chance the original is still out there somewhere. But, regardless of which couch shows up for Friday’s re-creation, Weaver and Johnson seem determined to get the details right.