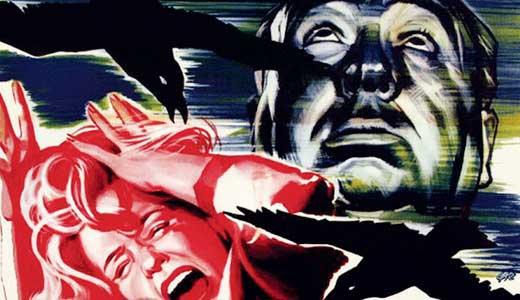 Have you ever wanted to watch 14 of the best films in history, in the best room in the city? Good. You’ll be happy to know the Palace Theatre is launching its annual Classic Movie Series this weekend, the sole focus on Alfred Hitchcock. It starts Friday with a screening of “The 39 Steps” (1935), followed on Saturday by “The Lady Vanishes” (1938). The series will feature two classic Hitchcock films every weekend for the next seven weeks, wrapping up with “Psycho” (1960) on Aug. 27 and “The Birds” (1963) on Aug. 28. All shows begin at 8 p.m. and are $5.

This is a thriller about espionage, murder, and false accusations. Richard Hannay is average guy on vacation in London, when he meets Annabelle, a beautiful woman who is on the run from secret agents. When she is murdered and Richard is accused, he too must go on the lamb from the same spies as not to meet the same fate.

Set in a train that’s traveling across Europe, Iris Henderson, a young beautiful socialite, and Miss Froy, an older governess (along with everyone else on the train) get stuck in a hotel for a night in the non-existent country of Mandrika. Not long after Iris finds that Miss Froy has simply vanished, and no one else but her on the train seems to have any recollection of the governess at all.

Bruno Anthony is a disturbed young man when he meets national tennis star Guy Haines. Guy is ambitious, aiming for a future in politics and dating the beautiful daughter of a Senator while waiting for his divorce to be finalized. The two men eventually come to jokingly assemble a place where Bruno would kill Guy’s wife, and Guy would murder Bruno’s father. But soon the joke goes too far when Bruno takes matters into his own hands.

Living a bored, quiet life in North Carolina gets draining for Charlotte Newton, but things look up when she finds out her favorite uncle, Charlie, is coming to town. He is charming and charismatic and woos everyone from her mother’s women’s club to the bank where her father works. However, not long after his arrival Charlie begins to act strangely, leaving Charlotte to suspect her beloved uncle of the unthinkable.

At the center of “Dial M for Murder” is a love triangle, between Tony, Margot and Mark. Of course the plot thickens when Tony begins to plan Margot’s murder on account of both her love for Mark and his own role as benefactor in her will. As with all good Hitchcock films, nothing goes quite as planned.

When an advertising named Roger Thornhill is mistaken by a band of spies for a secret agent he embarks on a cross-country journey for his life to find the real agent George Kaplan.

Two pompous college students, Brandon and Phillip, plan the perfect murder. Unfortunately for their intellectually inferior classmate, David, becomes the victim of the crime. And in a haughty move to relish in their murder, the two men throw a dinner party for David’s closest friends and family, while his body is hidden in a nearby chest. It doesn’t take long for flaws in the perfect crime surface.

Ever wondered what your neighbors are up to? Don’t. That’s what photographer Jeff Jeffries finds out. After being confined to a wheelchair in his Manhattan apartment, Jeff begins observing his neighbors lives and fantasizing about what their unspeakable misdeeds could be. But then again, maybe they aren’t fantasies.

When a body is discovered murdered in a sleepy New England town it sends shockwaves through the inhabitants of the town. Soon no one trusts anyone, including themselves.

John Robie is, an American expatriate and retired cat burglar, living a life of leisure on the French Riviera. When a copy cat burglar surfaces, performing heists that get penned on John, who must now figure out how to catch the crook that is putting his quiet life in jeopardy. But of course things get complicated when a woman enters the picture.

The McKenna’s, a family vacationing in Africa, meet a mysterious man on the bus. He tells them the details of an assassination planned to take place in London, before he is killed the following day. The would-be assassins, desperate to keep the couple silent, kidnap their son, thus leaving them to take matters into their own hands.

Retired police Detective Scottie Ferguson suffers from a debilitating fear of heights. An old friend asks him to follow his wife, Madeline, out of fear that she might be losing her mins. Scottie quickly becomes infatuated with the beautiful wife, and comes to find that Madeline might not be insane after all.

The most famous film in the Hitchcock cannon, we follow Marion Crane, a woman hiding out in a motel with a secret, as she falls into the demented realm of sociopath Norman Bates. Once she disappears, people come sniffing around The Bates Motel in search of the missing woman. It’s only then we find out how disturbed Bates really is.

This might be the second most famous film of Hitchcock’s. When a woman follows a suitor to a small vacation town in Northern California, she finds herself in the midst of a town being terrorized by massive flock of man-eating birds