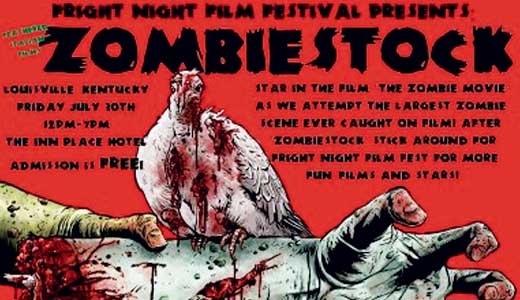 If you’ve ever participated in the Louisville Zombie Walk, you’ve probably found that one of the most amusing parts is when innocent passers-by driving along Bardstown Road are greeted by droves of adults dressed as zombie versions of pop culture icons, historical figures or just random dead people splattered with fake blood. Very few are completely horrified, though — a lot of people roll down their windows, ask what the hell is going on, and then say, “Oh, how fun! Honey, take a picture of me with these zombie Disney princesses. Aren’t they precious?”

It’s a no-brainer (ha, ha) — zombies are so in right now. Local filmmakers Jason Crowe and Roni Jonah of Feathered Italian Films clearly understand this, having found that zombie movies always sell the best whenever they go to film conventions.

So the duo decided to make one. Their film-within-a-film creation, based on Jonah’s “Galaxy Quest”-esque concept, will simply be called “The Zombie Movie,” and instead of having a regular cattle-call event to round up and film the zombie extras, they’ve decided to make a festival out of it, appropriately dubbing the event Zombiestock. The dress code: the deader, the better, and all are invited.

“I know as an actor, I always hate to wait — it’s always hurry up and wait,” Crowe explains. “This way, while they’re waiting, they get to meet celebrities, listen to bands, talk to artists, all kinds of things like that.” Zombiestock will be part of this year’s Fright Night Film Fest, which worked out well for both parties.

“It’s more of a numbers game,” Crowe says. “We help each other. We’ll all have fun. We’re all into the same stuff — the horror genre.”

While they’re at it, Crowe and Jonah will try to break the record for most zombies ever caught on film. They’re shooting for 1,200.

“It’s the first year, so if we don’t get a ton of people, we’ll make sure everybody has a great time,” Jonah says. “And we’ll do it again next year, and those people will hopefully come back and bring their friends, and every year it’ll get a little bit bigger.”

Both Louisvillians, Crowe and Jonah met serendipitously at a film contest in Los Angeles. Jonah, a former Ohio Valley Wrestling personality, had seen Crowe in cult horror movies like “Dead Moon Rising,” and Crowe, being a wrestling fan, knew of “Rockstar” Jonah. Soon after that first meeting, Jonah joined Crowe in his indie filmmaking endeavor Feathered Italian Films, which Crowe had started with best friend T.J. Moreschi. Ulitmately, Jonah took over much of the directing and writing, and was the one who persuaded Crowe and Moreschi to make feature films rather than shorts.

During our interview, I ask Jonah and Crowe to weigh in on the reason behind the zombie craze. What does it say about our society? “Because we’re fascinated with death?” Jonah says, laughing. Crowe says that zombie films often make some type of social commentary, but frankly, “It’s just fun.”