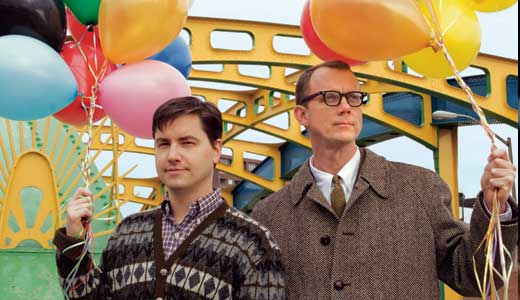 For more than a decade, Louisville native and English professor Drew Daniel and his partner Martin C. Schmidt have been better known as Matmos. Their multilayered sound collages are revered worldwide — the duo collaborated with Bjork and met heads of state in France and Iceland. Three years ago, the pair moved from San Francisco, where Daniel earned his doctorate at UC-Berkeley, to Baltimore. Their latest album, Treasure State, is a collaboration with So Percussion, a quartet formed at Yale’s School of Music in 1999, renowned for extracting rhythms from cans, hair clippers, ceramic bowls, dry ice and myriad knickknacks. Daniel spoke with LEO from a tour stop in Los Angeles.

LEO: How did the collaboration with So Percussion come about?
Drew Daniel: I got an e-mail from Jason (Treuting); he was coming to San Francisco and wanted to meet me and asked did I know about their work, and I did, because I had reviewed their recordings of (Pulitzer-winning composer) David Lang for KALX, where I was DJing at the time. So I knew about their work, and he knew about ours. The day I met Jason for the first time, I started to make a song out of aluminum objects, and that turned into the song “Aluminum” on the record. Jason played some aluminum for me that day. So our friendship and knowing each other and collaborating all started very organically. We’re very different people. Everybody in So Percussion is the product of conservatory training and a very intense, rich musical schooling, whereas I’m very much self-taught, and Martin is more or less the same. He had some piano lessons when he was 8, but aside from that, no formal musical training. We’re coming from different worlds, but I think we overlap in the idea of hitting objects, enjoying the sounds they make, and treating that as music.

LEO: On Supreme Balloon, there were only synthesizers and no mics used. Were there any fun restrictions this time around?
DD: With this record, we did have in mind that there would be a few tracks where we would try to work exclusively with the sound of objects. “Cactus” is one example of that, and so is “Aluminum.” There’s also a sense of, you know, why not make the most of too many instruments? In a way, it was a pendulum swinging away from the minimalism of an all-synth record. A song like “Treasure State,” part of the musical joke of it is that you keep hearing more and more ridiculous instruments entering the fray — sitar, grand piano, accordion, harp, glockenspiel, vibraphone, guitars, bass guitar — it just never stops piling up. We wanted to make a guitar center of sound, if that doesn’t sound kinda repulsive (laughs).

LEO: Who recorded this?
DD: That’s a complicated question. It started basically because of the hospitality of (producer-engineer) Brett (Allen), our friend at Snow Ghost studios in Montana, who’s just an incredibly generous, sweet guy and has this incredible studio in his house that he’s designed. It’s the kind of studio that if it was charging commercially, we’d never be able to afford, but he let us use it because he likes our work. So there’s a Steinway B, a treasure house of Neumann mics, just top-of-the-line stuff. He let us work a couple of summers in a row there. We did a first session that was Mark Lightcap from the band Acetone playing guitar and Zeena Parkins on harp and Martin and myself; then the next summer we went back with the guys from So, and that’s when a bunch of our songs met a bunch of their songs, and the idea of an album really crystallized.

LEO: On the live shows, is there any room for improvisation?
DD: Definitely. We did an improvisation where we would just start out from scratch and then push toward an E chord and then go into a So Percussion piece called “Goodnight.” There was a lot of that, and that’s really risky: Six people improvising can just be a jerk-off and kind of empty. So it’s easier in a way. I’m used to improvising with Martin where it’s a dialogue that’s a duo, back and forth, but with six people, it demands a lot more humility if it’s going to avoid the masturbatory problem.

LEO: When did you and Martin move to Baltimore?
DD: We moved three years ago for work reasons. I finished my Ph.D. at Berkeley and went on the academic job market, which, if you know anything about academia, it’s generally a gruesome trail of tears. I got a tenure track position as an assistant professor in the English department at Johns Hopkins teaching Shakespeare and Renaissance literature. We moved to Baltimore as kind of a shot in the dark, but it’s been amazing. It’s got an incredible music scene.

LEO: What are some of the things you’re hearing that inspire your own work?
DD: On the last tour we did, we brought this band Leprechaun Catering, and on this tour, we brought the Lexie Mountain Boys. The core of what I like most about Baltimore is the improvisation and noise scenes. A lot of it is related to poverty. There isn’t a lot of money, there isn’t a lot of infrastructure, and not many good clubs. (Musicians here) don’t own laptops, and they don’t use software, so they make their own instruments out of stuff that they can find or that they can build. There’s a more personal, idiomatic, weird outcome as a result. DIY is such an abused cliché at this point, but Baltimore enacts that every time.