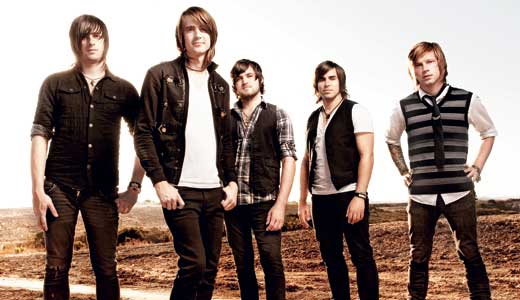 Mayday Parade lead singer/guitarist Derek Sanders shows humility over the band’s second CD, Anywhere But Here, coming out on Atlantic Records. “That’s just something that, as a kid, when I started playing guitar, I just never ever, ever, ever thought that anything like that would ever happen,” Sanders says about the group’s arrival on a major label.

His reaction is fitting considering the band’s beginnings. Four years ago, Mayday Parade decided to travel along with the 2006 Warped Tour, arriving each morning not to play a set, but to try to hawk its EP to ticket-holders lined up waiting for the venue to open.

Although plenty of people ignored Mayday Parade’s sales pitches, the group connected with thousands of potential fans, sold some EPs and created enough attention that the band was offered an audition that netted a deal with Fearless Records.

Since then, the band’s steady progress following its 2007 debut, A Lesson in Romantics, led to a slot on Warped that summer.

On Anywhere But Here, Sanders, bassist Jeremy Lenzo, guitarists Alex Garcia and Brooks Betts, and drummer Jake Bundrick quickly discovered that making an album for a major label would be a different proposition, beginning with the songwriting.

For the first time, the band was asked to work with outside songwriters, including established hitmakers Sam Hollander and Dave Katz (known as S.A.M. & Sluggo), Gregg Wattenberg, David Hodges (formerly of Evanescence), Bobby Huff and
David Bassett.

“The way that would work is we would have a song, and we’d take it to someone, and they’d help just make it better or whatever or contribute whatever they could to it,” Sanders says. “Or, if it was an unfinished song, they would help finish it, things like that, which is weird … It’s a little hard to take something that’s that personal to you, like a song, and have someone else you don’t really know contribute and say what they want to do with it. It’s really hard to get used to at first. But I think it all turned out for the best.”

Mayday Parade also experienced the reality that with some major-label projects, the
opinions of the record company, producer David Bendeth, (Paramore, Breaking Benjamin) and others figured into how Anywhere But Here would turn out.

“It’s like … there are 20 different opinions going into these songs,” Sanders says. “I kind of understand a little more now why bands change as they climb the ladder or whatever. It’s hard to go through that and still maintain who you are and maintain the same sound. But I feel like we got lucky that we all did work well together.”

In the end, the album is similar to A Lesson in Romantics, relying on guitar pop akin to Fall Out Boy or All-American Rejects.

The group has been gradually introducing songs from the new CD on this winter’s Take Action tour as well as Warped, where short set times will limit how many songs the band plays. Still, Sanders appreciates the opportunity these tours are giving the group. “The life of bands nowadays can be so short,” he says.