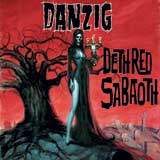 With all his side projects in classical music, comics and film, one might wonder why Glenn would write and release another Danzig album. Doesn’t he know that he can’t outdo himself? Apparently not, and I like his gumption. You hear it in the opener, “Hammer of the Gods,” and my personal favorite, “Rebel Spirit,” which features well-placed double bass that boosts the chorus. He could go metal and come off like umpteen other bands, but classic blues-hard rock restraint keeps him from sounding boring. With crafted choruses and, yes, that bellow, Danzig is still paying attention to a side of metal most fail to reproduce. Glenn spends Deth Red Sabaoth doing everything he does best with lucidity and focus, wielding Sabbath-influenced riffs and strutting along whether the fans get it or want it.