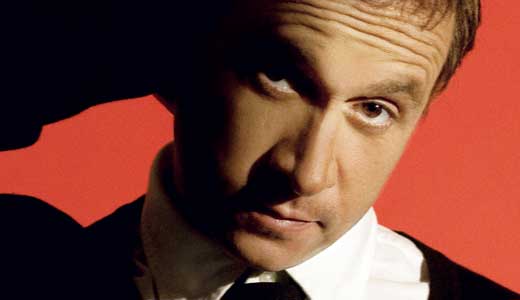 When Pauly Shore burst into our collective consciousness two decades ago, the world wasn’t quite ready for what they got … and I’m still not sure if they’re ready.

“I like Louisville,” Pauly says of his upcoming shows at The Improv. “I’m sure it’s going to be crazy at Fourth Street Live. There’s nothing better than out-of-shape Midwesterners in the summer wearing nothing!” The son of legendary comedy club owner Mitzi Shore, Pauly entered the public domain as the voice and face of the MTV generation. He went on to make a string of critically panned, financially successful comedies that have become cult classics and basic cable staples, like “Encino Man,” “Son in Law” and “Bio-Dome.” Pauly brings his absurdist, neo-hippie sense of humor to town this weekend.

LEO: As an early pioneer on MTV, how do you feel about the direction the network has taken in recent years?
Pauly Shore: You’re old, buddy. I’m old. We can’t judge that station; we’re not 12 years old. You have to ask kids what they think about MTV … it’s not for us anymore. You’ve got to move on.

LEO: Growing up in your mother’s club (the legendary Comedy Store on the Sunset Strip), what was that like?
PS: The good ones stood out. They made you stay and watch them. When you saw Richard Pryor or Sam Kinison onstage, you just kind of gravitate toward them, ya’ know?

LEO: Did you recognize that even as a kid?
PS: Yeah, of course.

LEO: Who were the guys you watched from backstage that made you want to do comedy?
PS: To be honest, I was inspired by John Hughes films, and then rock ’n’ roll music like The Clash and the Rolling Stones. At the end of the day, it’s either in your blood or it’s not — comedy, you don’t choose it, it chooses you. It’s not like you go, “Hey, I wanna do stand-up.” It’s more like, “I gotta get up there.”

LEO: You’re 42 now. Has your approach to comedy changed since you were 20?
PS: Yeah, oh definitely. As you get older, you get a little more sophisticated, but not too much. But when you’re younger, you don’t really think about it as much. When I was younger, it was more about the persona than the material. Now it’s more about the material than the persona.

LEO: Where did “The Weasel” come from?
PS: I don’t know, dude, it just developed, bro. It wasn’t like I sat there with a fuckin’ Bunsen burner and said, “What can I do?” It was what it was, and then we just stuck a camera in front of me, and there you have it. It wasn’t planned, ya’ know.

LEO: In hindsight, films like “Encino Man,” “Son in Law” and “Bio-Dome” have become classics in their own right. Why do people still love to hate your movies?
PS: The thing with my films is — and this is just my experience — when they came out, obviously there were people that liked them and people that didn’t like them. And a lot of people that didn’t like them, now when they see them go, “They’re not that bad, actually.” It’s one of those things where it was cool to dis; now it’s not cool to dis. People go, “I actually liked ‘Bio-Dome,’” and I’m like, “What do you mean actually fuckin’ liked it?” They constantly play on cable and TV, they keep running them, so obviously they do well or they wouldn’t run “Son in Law” on TNT every weekend.

LEO: Are mockumentaries easier to make than regular films?
PS: It’s definitely harder to produce, direct and star in a film than it is to just act. It’s more rewarding at the end of the day when you can come up with something that’s in your mind and spew it out.

LEO: In your more recent films, you’ve been playing yourself. Is that the real Pauly Shore we see in those films?
PS: It stems from something that’s real, but in order to entertain, it can’t be real. Does that make sense? In “Pauly Shore is Dead,” I play a guy that lost everything and thought that if he faked his death, he would be back on top, so part of that was real — but I didn’t really do it. Carrot Top didn’t really move into my house. Mini-Me wasn’t my neighbor, ya’ know?