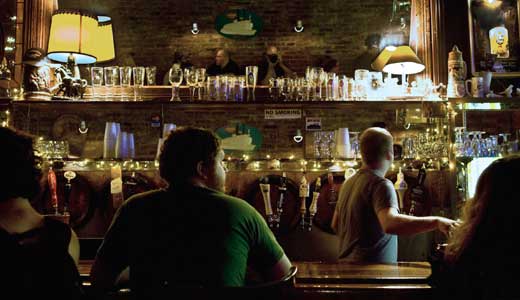 Shortly after midnight last Wednesday morning, the Nachbar was abuzz as usual. The popular watering hole at 969 Charles St. had just hosted its third spelling bee, and as tipsy participants and patrons drank and chatted, bee organizer Emily Forester stepped out back to mingle with friends on the bar’s expansive fenced-in patio.

“We weren’t out there for very long,” Forester says. “Then (Alcoholic Beverage Control) stopped by, and we were asked to go inside with our drinks.”

ABC officers had, in fact, arrived in response to a noise complaint. They informed Nachbar’s owner, James Gunnoe, that he was in violation of zoning law and had to corral his customers off the patio and into the bar.

“They told me we were in violation … of ‘Expansion of Premises,” Gunnoe says. “We expanded beyond our rights to have people on the patio, even though people are out there all of the time.”

Like other Germantown bar and restaurant owners who offer outdoor seating, Gunnoe is puzzled as to why the ABC has been cracking down in recent weeks on what is considered by many in the neighborhood to be a longstanding tradition of open-air, on-property alcohol consumption.

Gunnoe says it was “more than implied” when he purchased his liquor license from the Nachbar’s previous owner in 2003 that the C-1-zoned property had what is known as a non-conforming use permit, which essentially allows C-1 zoned businesses to do things like grant patrons the right to drink outside.

“Originally, I wanted to build a brewery out back,” Gunnoe says of his now-defunct patio space. “I was always under the assumption we had nothing to worry about. Now I will have to deal with the diminished business this will cause for the rest of the summer.”

Other Germantown bar and restaurant owners, like the Swan Dive’s Rebecca Taylor, think the city is practicing selective enforcement when it comes to ABC codes and regulations.

“At first I thought it was just my neighbors,” Taylor says. “Our next-door neighbor is a good ol’ boy, you know? Here we are, some weird vegetarian place that doesn’t serve Budweiser, but now I’m starting to feel like it’s some concerted effort to target specific bars that younger crowds go to. The city thinks there’s all this money there and they’re trying to tap into that.”

Last October, ABC officers showed up at the Swan Street bar and slapped Taylor with a $1,200 fine for ‘Expansion of Premises,’ aka people drinking at two picnic tables on a small sidewalk patio out front. With a hearing date set for September, Taylor plans to apply for the non-conforming use permit she originally thought was part of her license.

“It’s one thing to feel like I broke the rules and that I need to pay the price at this point,” she says. “But I feel targeted instead. Small-business owners in Germantown are being busted for something they’ve always done without any real trouble, and meanwhile you have half-naked girls and drinking in the streets at Fourth Street Live.

“In the meantime,” Taylor adds, “I’m not generating as much revenue, therefore I’m not creating jobs, and it puts my business at risk. It feels like the city doesn’t care about its small businesses.”

Metro Councilman Jim King, D-10, was displeased to learn of the development in Germantown, part of his district.

“ABC enforcement is part of the executive branch, not a legislative function,” King says. “That said, I would say that it is important that all of our businesses in Germantown and throughout Louisville comply with code enforcement. Now that this has become an issue, and because of this great tradition we have in Germantown-Schnitzelburg, our thinking is to work with those owners and the executive branch to cut through the red tape and try to solve this problem to everyone’s satisfaction.”

The specific law at the heart of the matter is KRS 243.630, which deals with the transfer of licenses and interest from one owner to the next. Basically, for a bar to “grandfather” its license and non-conforming use permit from one owner to the next, the local Alcoholic Beverage Control administrator must approve of the transfer. The problem, it seems, is that most Germantown business owners incorrectly assumed this was happening.

Although the ABC is charged with enforcement, the commission comprises only one-third of the bureaucratic triangle these businesses must deal with, the other two being Inspections, Permits & Licenses and the Board of Zoning Adjustment.

“We’re pretty complaint driven,” says local ABC Administrator Glenn Smith. “If we go to a place, it’s usually because someone called to complain.”

Smith denies charges that the ABC is cracking down on Germantown-area businesses, and says that the organization is committed to enforcing codes equally across the city.

Bar owners who have not yet obtained zoning modification applications can do so via Metro Public Work’s 444 S. Fifth St. building, which houses all the necessary departments under one roof.

“It’s a one-stop shop,” says April Robins, a supervisor at Metro IPL. “We’re all established here in this one building, so it hopefully is easy. And if IPL isn’t who they need to talk to, we can send them up a flight of stairs or two and connect them with the right person.”

But Taylor and several other Germantown bar owners who’ve already made that trip downtown to no avail have enlisted the help of an attorney to investigate what their rights are and if they are being unfairly trampled upon.

“I’ve been asked by several local bar owners to look into the matter,” says Mike Morris, a lawyer with offices on Goss Avenue. “The majority of the bars, taverns and restaurants (in Germantown) are zoned C-1, and outdoor consumption is not allowed in C-1 unless they get a non-conforming right. Then they have to prove to (the Board of Zoning Adjustment) that they’ve had this use continuous since 1971,” the year it became mandatory to require ABC approval.

Morris says the owners are interested in working within the law and with ABC, but they also are determined to figure out whether they are being unfairly targeted.

“I don’t know why there’s been a recent rash of complaints,” he says, “but it’s something I’d like to get to the bottom of.”