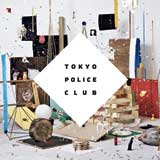 Canadian (not Japanese) pop outfit Tokyo Police Club is skating on wafer-thin ice. A 2007 blogger-created catapult to fame made songs like “In a Shell” and “Your English is Good” known widely. Their post-emo/fuzz-lite sound is appealing to those who enjoy music that sounds British, but it isn’t distinctive enough to make you sit up and take notice. Don’t get me wrong, there are a couple great lines about becoming an adult on Champ (not to mention some well-placed nods to a variety of influences, like the Strokes and Interpol), but I was hoping for a bit more growth from their debut LP, A Lesson in Crime. The changes are too subtle (slightly more upbeat, slightly less self-conscious) considering this is their second full-length album. The boys need to keep an eye on longevity and push it a bit further next time, but the somewhat-forgettable Champ is on the right track.