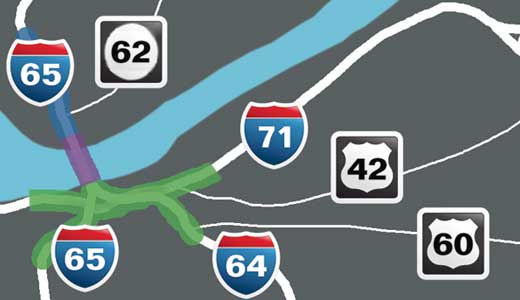 Last Thursday, the Ohio River Bridges Project Bi-State Authority heard impassioned pleas to finance and build the East End bridge first; downsize the demolition and expansion of Spaghetti Junction; not to toll existing bridges; not to toll any bridges; not to build a downtown bridge; and to scrap the project in favor of public transit.

The 14 members also heard business and labor leaders urge them to proceed with the entire project as is.

Public comments followed a two-hour meeting in a packed room of the Greater Clark County Schools administration building amid growing doubts that the massive infrastructure project, the nation’s third largest, can be financed all at once.

“In the current economy, states are in horrible shape, the federal government’s financing is getting tougher and tougher … rates have gone way up on the bond issues,” said Chris Tobe, investment consultant to state governments and former aide to retired Indiana Congressman Lee Hamilton. “The fastest way to build the East End bridge — and probably the only way — is to somehow divide this project” and to finance and build the East End bridge first.

ORBP planners sequenced it first to relieve congestion during the construction of a downtown bridge, says Chuck Wolfe, spokesman for the Kentucky Transportation Cabinet.

Officials hope to complete the East End bridge by 2017 and the downtown bridge by 2020, Project Manager Gary Valentine told the authority last March.

The completion of an East End bridge and its approaches would allow traffic between Southern Indiana and eastern Jefferson County to bypass Spaghetti Junction, where I-64, I-65 and I-71 converge.

Some believe minor alterations there coupled with only one new (East End) bridge is the largest project the region needs or can afford.

But the longstanding position of River Fields, the conservancy that opposes the eastern bridge, is: “The only way to fix the traffic and safety problems at Spaghetti Junction is to build a new downtown bridge.”

Steve Magruder, prolific critic of River Fields and administrator of the Louisville History and Issues website, disagrees. “Even though we have a Transportation Cabinet study that shows that the proposed East End bridge essentially does the job of taking traffic stress away from the junction, certainly we could change or add a few ramps to remove some of the forced traffic weaving that triggers most of the bottlenecks during rush hour,” he told the authority. “Trust the engineers to reduce this project.”

Local historian and architect Steve Wiser said, “There are several quick fixes to that junction that could free up traffic within the next year, and that should be done now.”

The 16-year plan to relocate the entirety of Spaghetti Junction remains a controversial component of the $4.1 billion project for its cost, expansion of I-64 over Waterfront Park, and encroachments on historic Butchertown and Clifton.

Holding a “NO TOLLS” sign, Martina Kunnecke of Neighborhood Planning and Preservation, said, “The elephant in the room is the downtown bridge and Spaghetti Junction. Let’s divide this project and not the community and do what is right, even though it takes a lot of effort, a lot of work, a lot of venom.”

Larry Hujo of the Indiana-Kentucky Regional Council of Carpenters had plenty of venom for longtime obstructionists of the ORBP. “Ten or 12 years ago, it was, ‘If you do this East End bridge, you’re gonna displace 30 affluent families,’” he said. “It didn’t bother anybody to displace 3,000 working-class families to expand the airport.”

Meme Runyon, executive director of River Fields, sat in the audience but opted not to speak.

Hujo added that the construction industry is beset by 21 percent unemployment. “It’s time to stop talking and stop making excuses and develop the political will to get the job done,” he said prior to a spirited rebuttal from an 18-year-old Louisvillian.

“What really takes political will is looking toward our clean-energy future,” said Tyler Hess, environmental activist and sophomore at Depauw University. “It doesn’t take political will to build another highway — ‘Oh, let’s build another bridge, let’s keep pouring concrete, let’s keep using our dollars inefficiently’ … We need to realize that public transportation is the most sustainable option…”

Hess spent most of the meeting holding a sign redefining ORBP as “Our Riverfront Butchered Permanently.”

He attended with a group wearing “Go Green” T-shirts, signifying their support for Jackie Green, independent candidate for Louisville mayor, who also spoke.

“I maintain that a world-class regional public transit system is a higher priority than another new Ohio River bridge,” said Green, whose campaign website calls the ORBP “a regressive, 1950s-style transportation plan” and claims it would “delay by decades” a public transit system.

“The future will not look like the past 60 years,” Green said. “Most of us will not see that which is coming to the generations that follow. But think of them, please, as we make these decisions — and ask tough questions.”

Rigorous queries will be crucial as the process moves forward. A July 2008 study by the University of Texas Center for Transportation Research found a majority of toll road projects overestimated traffic for the first five years by 20 to 30 percent.

That’s one of the reasons 8664 co-founder and former mayoral candidate Tyler Allen is “fairly confident” the authority “cannot come up with the actuarial predictions to finance something this stupid,” he tells LEO.

Allen favors dividing the project, and 8664’s consultant believes it meets the Federal Highway Administration’s guidelines for division. “The East End bridge as a separate project would emphatically meet the criteria,” Walter Kulash, a traffic engineering expert, wrote in an April e-mail. “Not only would the bridge succeed (i.e., have a high level of use) as an independent project, but it would provide large benefits elsewhere (i.e., at the junction).”

But Bridges Authority Executive Director Steve Shultz said dividing the project “is not on the table for us right now, other than maybe following up with state sponsors and federal highways — taking on board the comments we heard today — and asking them that.”

“So are you going to ask them that?” I asked.

“I’m not going to make it part of our normal work stream because we’re trying to fund the bridges project as it’s been defined for us,” he replied.

Nevertheless, Shultz called it “a legitimate question that some of our authority members have.”

As the debate heats up over tolling, it seems two GOP candidates have identified the bridges project as a wedge issue. Todd Lally, challenger to U.S. Rep. John Yarmuth, D-3rd, recently announced his support for an East End bridge-only option.

In the mayoral race, Republican Hal Heiner is reaching out to Democrats and independents — evidently, with some success. “I might find myself voting Republican for the first time in my life,” wrote “Edmund” on The Ville Voice website. Independent Steve Magruder registered his “tentative support” for Heiner, writing, “He has shown himself to have the most open mind between the two major candidates.”

Both Heiner, a Metro councilman, and Democrat Greg Fischer support the ORBP despite their concern about high tolls, but they discuss the issues differently. Heiner, in a June 29 interview with cn/2 Politics, said, “I support the completion of the East End bridge. I support that it’s built first.” Heiner also supports modest tolls and seems to draw the line between cents and dollars.

Fischer may be hobbled by his friend-of-River Fields and son-of-Abramson stigmata.

In an interview with WHAS-Radio’s Mandy Connell last week, he said, “Let’s see what it’s going to cost, let’s see what the final recommendation comes to before we really burn a lot a mental calories … There’s a lot of people that are excited about something that may not occur.”

The authority is expected to vote on a financial plan after November’s election.