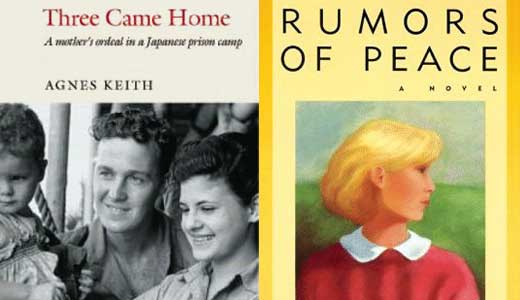 During World War II, after she and her son were sent away from their adopted home of Borneo, the American journalist Agnes Keith kept a secret but vivid record of her three and a half years imprisoned in a Japanese POW camp for women, before they were liberated by Australian forces in 1945.

Written in her tiny script on tobacco papers and then hidden amid her son’s toys, her memoir gives the harrowing account of having no food, no water, no beds or warmth, or any of the creature comforts most Westerners take for granted.

Out of this hellishness, Agnes Keith (a former reporter for the San Francisco Examiner whose father was a founder of Del Monte) shows a remarkable ability to understand and try to come to grips with the inconceivable circumstances in which she found herself. In many ways, hers is a more concrete version of Viktor Frankl’s WWII meditation “Man’s Search for Meaning.” It’s the kind of book that reminds you why memoirs used to be written — in contrast to today, when every other 22-year-old celebrity sits down to “reveal all” about drug rehab.

For years, “Three Came Home” has been out of print in the United States, but there are used copies to be found all over the Internet. In 1950, the book also was made into a film with Claudette Colbert playing Agnes Keith.

Rumors of Peace
By Ella Leffland. First published in 1979.

Ella Leffland’s story, engaging from start to finish, follows Suse Hansen’s transformation from childhood to young adulthood in the fictional oil-refinery town of Mendoza, Calif., during the years between Pearl Harbor and Hiroshima. As she grows up, and nearly the whole world goes to war, Suse (who at the beginning of the story, along with other kids in her classroom, drew pictures of “dirty Japs” with their heads being blown off) begins to seek out real news in libraries, on the radio and in universities because, gradually, it feels wrong not to know the truth. This was, after all, in the days before Fox News and the shock jocks.

Sure, in between, she has the typical teen crises involving boys, fights with family members and the perennial question of what to do with one’s hair, but something seismic shifts inside her, especially when it becomes clear that there are human beings in her own neighborhood who might be affected by war and prejudice. Before this, her existence has been so sheltered that, although her parents are Dutch immigrants, Suse is barely aware of the German invasion of Holland and the unfolding terror in Europe.

“Rumors of Peace” is the rare novel that works for readers of all ages. There is nothing pedantic about it, nothing forced, no obvious way in which a lesson is learned. In other words, it is exactly like the process of genuine enlightenment. I have recommended it to pre-teens, young adults, the middle-aged and the elderly. Not one of them has considered it a waste of time.