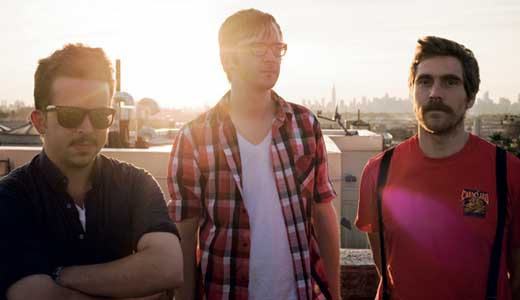 Bear In Heaven began as the solo project of Jon Philpot. The title of the group's latest, Beast Rest Forth Mouth, is a play on directional terms of a compass.

Joe Stickney needs a beat, or he can’t dance to it. The drummer for Bear In Heaven says that for the band’s breakthrough album, Beast Rest Forth Mouth, satisfaction arrived either when hips moved or heads nodded. “It’s good to think about your audience while you’re making music, but you don’t want to pander to what everybody else is listening to at the time.”

Everybody else is listening to them. Pitchfork christened the Brooklyn troupe’s second release “best new music,” and its psychedelic synth-pop spaceship touches down Aug. 1 as part of a fundraiser for the new art space Land of Tomorrow.

Named after a drawing that depicts a bear drinking from the earth, Bear In Heaven began in 2003 as the solo project of Jon Philpot, who released an EP that year called Tunes Nextdoor to Songs. He roped in collaborators to flesh out his ideas, including future School of Seven Bells member James Elliott, and in 2007, released Red Bloom of the Boom on Hometapes, also home to Louisville’s Shedding. Stickney, a graduate of the Savannah College of Art and Design, moved to New York in 2002 ostensibly to pursue a career in painting, “but when I got there, I immediately started looking for people to play with.”

The band hopes this fundraiser show is the first of many for them.

So does Drura Parrish. He and business partner Rives Rash founded the first Land of Tomorrow gallery and art fabrication space in Lexington. There they hosted 20 events a year, featuring everything from noise art to rock shows, that drew upward of 1,000 people.

The Louisville space, at 233 W. Broadway, encompasses 18,000 square feet. “We’re committed to Kentucky; we’re artists, and we think it’s important that you have to have a presence in Louisville,” Parrish says.

“It’s a place where musicians, artists and designers can feel freer than in a normal metropolis. You have a strong enough critical base, where people can get feedback, but you don’t have the pragmatism that you have on the coasts. Louisville is a place where young, eager artists can come and flesh out ideas as they’re evolving.”

The Louisville location is transitioning into nonprofit status, and proceeds from events will go to funding future art shows and events.