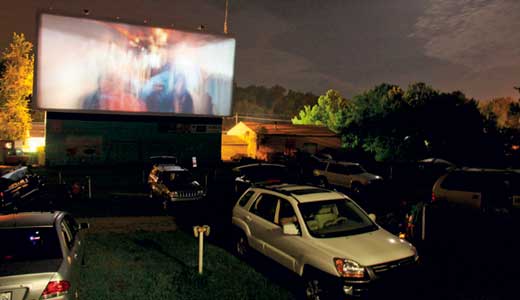 Nostalgia can be contagious. I learned this while waiting for a double feature to begin at the Georgetown Drive-In last Friday night.

Just before darkness fell, while people built temporary nests in the beds of their pick-up trucks, I was hit with something stronger than a sense of déjà vu. It was remembrance of a time that I didn’t live through: reminiscence for a previous generation’s past. This was not too unlike “Inception,” the movie that was about to start, where characters enter other peoples’ dreams and extract parts of their memory. Somehow, I was immersed in nostalgia that wasn’t my own.

The drive-ins in my hometown were long gone by the time I came around. A tight real estate market prohibited sprawling venues that operate only a few hours a night and a few months per year. I can count on one hand the number of times that I’ve been to an outdoor movie theater, usually stumbled on in places like rural Florida or New Jersey. Two of these occasions were midday, flea market trips — so we can throw those out. The first movie I watched outdoors was 1991’s “Dying Young,” and it’s too bad we can’t throw that one out too. Believe me, I’ve tried to scrub this maudlin, Julia Roberts vehicle from my mind. In it, she plays a nurse who falls in love with a 28-year old Leukemia sufferer: ack!

So, what made this all so familiar, given my limited drive-in experience? Was it the aroma wafting out of the snack bar — equal parts pop corn and cotton candy — that sent me back to the summer nights of my childhood? Have I ingested so many episodes of “Happy Days” that the ’50s have entered my bloodstream?

A better theory is Georgetown’s unforced Americana, with its throwback fixtures and signage. These could have been put in place before opening night, back in 1951. The history is palpable here, like when an announcement sounds from the vintage speaker boxes, politely reminding us to make sure our parking brakes are engaged, and to please hang the speaker back on the pole before leaving. “Forgetting to do so will damage your car and the equipment.”

This announcer sounds less like a ghost when he informs us that the theater will soon go digital; a practical business move indeed, and hopefully one that won’t siphon any of Georgetown’s timelessness. The films and automobiles that populate this place will continue to evolve, but our reason for being here hasn’t changed much in nearly 60 years. Once the projector lights start to beam concession stand advertisements onto the screen, it becomes easy to forget what decade you’re in.

When Georgetown opened, Americans seemed determined never to leave their vehicles. “Rolling living rooms,” is how my father once referred to mid-century, American automobiles. With their fins and chrome, these machines were so impressive, roller skating waitresses would deliver cheeseburgers right to the window, as if serving the car and not the people inside it. By the end of the decade, drive-thru banking had spread across the Atlantic to Liverpool. As families became able to upgrade with greater regularity, former workhorses were passed down to teenage children who proliferated a hot rod culture, and a make-out culture, reflected on the radio by acts like the Beach Boys. The drive-in (or “passion pit,” to use ’50s slang,) peaked then, fitting very neatly into this picture.

As technology changes, so too do the ways we watch film. Today, our collective obsession seems to have shifted to laptops and handhelds. With first-run features already showing up on sites like iTunes, these devices likely will become the venue of choice for an increasing number of movie “goers.” Where we once didn’t have to leave our cars to see a movie, we now don’t even have to leave our beds.

I recently overheard a TV salesman tell a customer that everything is going to be in 3-D soon.

“Everything already is,” replied the 50-something man, implying, I think, that there is plenty of dimension to be had if you just look up occasionally.

“Not yet,” the all-business salesman answered, hinting toward a future where cell phones will have 3-D screens. Apparently, Motorola’s Ming is not far down the road.

The only thing 3-D at Georgetown is the occasional lightning bug. With 3-D television already in heavy pre-promotion and another big push on its way for the “Avatar” re-release, it is nice to escape this craze for a few hours. Watching movies the way my parents used to feels like a respite from all that.

Far from the ideal viewing experience — especially to anyone who’s become accustomed to THX surround sound’s encapsulation of the senses — the drive-in offers something beyond the movie that’s being played. The heat lightning popping across the sky became part of “Eclipse,” Friday’s midnight movie. The locomotive that coursed by at one point was very nearly on cue with a runaway train in “Inception.” More than these added dimensions was a feeling of connectedness to those around me — a sensation I expect will be lost the next time I settle in to watch a 3-D movie on my cell phone.

Now would I recommend the Georgetown Drive-In as the ideal place to see “Inception,” the latest from Leonardo DiCaprio and Ellen Page? Well, perhaps not. Some critics have had trouble following the dream-within-a-dream-within-a-dream plot in regular theaters. A windshield and monophonic speaker created enough separation for me to occasionally lose interest during the two-and-a-half-hour ride. Honestly, though, writer-director Christopher Nolan owns some of this blame.

As for my experience viewing “Eclipse,” I must recuse myself, seeing as how I nodded off a little before 2 a.m. That said, if you’ve seen any part of the “Twilight” saga, you don’t have to see “Eclipse” to know what happens. This may make for good drive-in material, because you can visit the arcade, star gaze and smooch your date without losing the story. For this reason, I say go to the Georgetown Drive-In and get distracted.