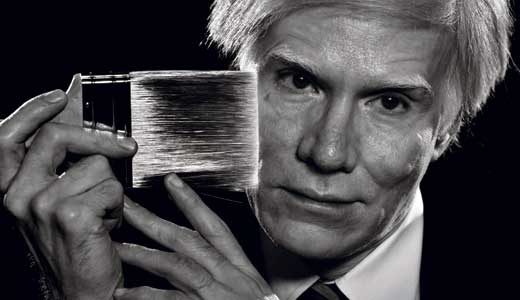 © Museum of Fine Arts, Boston © The Estate of Yousuf Karsh

Pop Art is art ready-made for you. No need to study up on people long dead or view obscure historical scenes. You already know the subjects, be they movie stars, advertising or food. Its genius was the use of Western popular culture as its focus, putting all viewers on a level playing field.

This “popular art” of the ’60s and ’70s was a backlash to the highly cerebral musings of Abstract Expressionism. You’ll find no greater practitioner of the movement, at its most basic and broad, than Andy Warhol (real name Andrew Warhola).

Warhol (1928-87) became a walking example of Pop Art, with his white wig and blank stare. He loved Campbell’s soup cans, Coca-Cola bottles and Marilyn Monroe, and he believed others did, too. Putting those images on canvas, paper or board, colored in bright hues, and calling it art gave him a license to print money (which he literally did, in his series depicting dollar bills). A background in commercial art served him well.

Warhol was at the right place at the right time, becoming one of the most pivotal artists in history. His varied artistic empire included being the co-founder of Interview magazine, a filmmaker (my personal favorite is “Frankenstein” in 3-D) and manager of the band Velvet Underground.

Warhol’s “Myths” series, currently at the Speed Art Museum, features 10 screenprints on board, sprinkled with diamond dust, which he created in 1981. The title refers not to Greco-Roman gods but to 20th century icons. Fictional characters from the world of film, history and literature abound. They are easily recognizable, yet we are looking at these popular subjects as interpreted by the eccentric artist.

For example, Warhol portrayed himself as “The Shadow,” a popular radio crime fighter from the 1930s. The double portrait has him looking out at the viewer as well as in a darkened, shadowy profile. But you could also say his “Mickey Mouse” is a portrait, as he said he wished to become the Disney character.

In “The Witch,” from 1939’s “The Wizard of Oz,” the Wicked Witch of the West is portrayed cackling, green and still frightening after all these years.

The rest of the 10 subjects in the series are Superman, Mammy, The Star, Uncle Sam, Santa Claus, Dracula and Howdy Doody.

The prints were exhibited locally at Kosair Children’s Hospital, on loan from the Lewis Bass family. This is the first time they have been shown as a group to the museum-going public.

On Friday, July 16, the Speed Art Museum will be transformed into a mini version of Warhol’s studio, nicknamed The Factory, during the Art After Dark event. (See film preview for more info.)