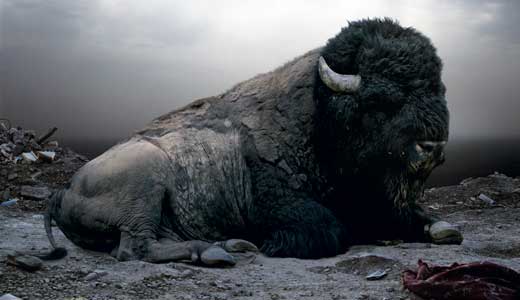 I obviously don’t watch enough Animal Planet. I didn’t question why a pair of moose and a swarm of tropical budgerigars were in the same photograph. Turns out, the moose were from the American Museum of Natural History, and the parakeets were just one bird — photographer Simen Johan’s pet — digitally multiplied and inserted into the image. All of Johan’s work is like this — there is something tangible and ordinary, but something about it doesn’t quite make sense, like a photo of a llama with a poodle shave or an actual deer head on the wall with Cousin Itt hair. In the his current show at 21c, “Until the Kingdom Comes,” the Swedish-born artist — now living in New York City — marries fantasy and reality in his untitled photographs and sculptures, all of which are formed from piecing contrasting elements together. The exhibit begins with his earlier photos, containing mostly children, called “Evidence of Things Unseen,” and then shifts into his more recent work with animals.

LEO: The description of the “Evidence of Things Unseen” series says these are more like film stills — can you explain further?
Simen Johan: It’s the narrative, the before and after. Almost like a snap from a movie. The difference between the animal work and the kids work is that the animal work is more about the moment depicted. The kids work is also about the moment depicted, but it’s also that notion of what happened before and what’s about to happen. The before and after is just as important as the single frame.

LEO: Where did you shoot?
SJ: I shoot all over. Some of the kids were shot on location, others were shot in the studio and digitally inserted into the landscape — like the girl with the cigarette butts, that’s actually my sister playing on the beach, and then I removed her bathing suit and put her into this landscape. The boy with the cat is actually a picture of me as a kid. I put in a different cat, I added some scratches, and the background is in The Metropolitan Museum of Art in New York. I work intuitively, mostly. I shoot things that I’m attracted to, that appeal to me on some level. I have a huge library of images, and I put them into the computer and try to piece them together and make something from it.

LEO: How did you do the one of all the snowmen?
SJ: I made them all, they’re just snowball-sized. That was the quickest image I ever did. It took me two hours to make those snowmen, and then I took the picture, and that was it. But others — when I don’t know what I’m going to use something for — it can take me a year or two to figure out exactly how the image is going to work out. But I work on a lot of images at the same time. I have probably 20 images in the works at any time. Some of them work out, and some of them don’t.

LEO: What gave you the idea to incorporate taxidermy?
SJ: I just turn to sculpture sometimes, just trying new things. I think the way I work on sculptures is not that different from the way I work with images, because it’s all about adding and subtracting elements. It’s just a matter of making the fantasy more real by bringing it out in the open.

LEO: I’m almost hesitant to ask what you’re going for, since you say you like to leave your work open for interpretation, but is there any way to sum it up?
SJ: I’m interested in fantasy — how fantasy shapes our experience of reality. I create fantasies, but I don’t use fantasy as an escape. I use it to get something real out of life and living. A social reality is built on many false promises — the notion that ultimate enjoyment is a possibility, that truly can be had, that there’s eternal life after death. In my images, I’m depicting this promise, too. I’m trying to draw a connection. When you make an obvious fantasy that follows the same logic as reality, the scenes become apparent, you can see why the fantasy is occurring. Like the llama — the llama feels very special in her fancy hairdo — you can relate that to a lady going to a beauty salon. We construct these fantasies, we look for truth, but when we don’t like the answers we find, or the answers don’t exist, we create our own answers. We forget about our own mentality — when we have this fancy haircut, we feel like we’re better than everybody else. I’m interested in the ramifications of desire — that desire is never satisfied. The more we achieve, the more we want.

LEO: It’s interesting how you can make all of these statements about society with pictures of animals.
SJ: I’m trying to figure out how to include other subject matter. I’m not really stuck on animals; I don’t want it to be about animals doing funny things. I want it to be about something more universal.