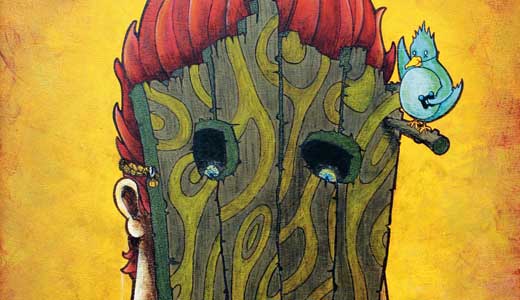 Creative freedom — it’s what every artist craves but only a true artist captures. That freedom is the inspiration for Robby Davis’ first solo show, “Far, Far Away,” opening Saturday at Liberty Tattoo and Art Parlor.

Though nervous in the days leading up to his opening, Davis keeps his work in perspective.

“As an artist, it’s always in the back of your mind how people will react to your work,” he says. “I try not to worry about it. As long as it stays fun and keeps me inspired, that’s really all that matters in my opinion. Doing this is my creative outlet where I have 100 percent freedom and control. If I worry too much about how others will receive it, then it becomes more like work and not play.”

Having created art for as long as he can remember, Davis tends to focus on characters, and some of his earliest creations show up in his art today. While in grade school, he admits he spent more time doodling than reading and writing.

“I always think back to when I was in the sixth grade,” he recalls. “My teacher encouraged a few other classmates and myself to draw. She made a deal with us … after we finished our daily assignments, we had the rest of the day to draw comic book and cartoon characters. She would laminate drawings at our request, and I still have a folder full of them.”

The characters that fill his drawing boards and appear in his exhibit are certainly not the doodles of old, but an imperfect world of fantasy and doom. Davis’ worlds draw you in.

“I enjoy the idea of narrative,” he says. “Whether it be verbal or visual, I always try to tell a story in my work using a juxtaposition of tragedy and happiness. I sometimes don’t know what that story is right away, but isn’t that how life goes? Sometimes life can be a mix of tragedy, happiness and uncertainty. Many of my characters have overcome their imperfections and have learned to be happy no matter how tragic their story. Sometimes you just have to live in your own world to do so.”

When you browse through his collection, you may wonder what drives the ideas he pulls from his imperfect world. Though some people can point to a specific day or certain events that inspire their art, it’s a multitude of small things that bring his to life.

“There’s really not one specific thing,” Davis says. “Just everyday people I see and hear. Maybe I see a guy walking down the street with a funny looking head or a woman that shouldn’t be wearing that outfit. Other artists, fairytales, song lyrics and films have also been an inspiration.”

Merging tattoos and art exhibits under one roof seems like a natural evolution. The similarities between the two make this venue the perfect choice for Davis’ show.

“I’ve always been a fan of and inspired by tattoo art and culture, as well as graffiti and skate art/culture,” he says. “I can identify with the renegade art style that is often associated with these cultures. Plus, the owners of the shop (Suzanne Edds and Gary Bell) are just great people to work with.”