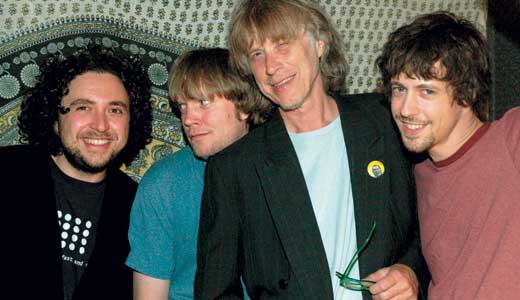 During the 35-plus years he led NRBQ, Terry Adams was infamous for never going on stage with a predetermined set list, calling songs as the spirit moved him. But for his appearance at HullabaLOU Sunday with his new band, the Terry Adams Rock & Roll Quartet, he already has chosen a special song.

“I’m looking forward to playing ‘My Hometown,’ that great song from ‘The Andy Griffith Show’ written by Aunt Bee and Clara Edwards,” says Louisville native Adams from his Massachusetts home.

The HullabaLOU set will likely include some songs from Crazy 8’s, the recent CD by Adams’ new group, and Adams says he will certainly do a tune in memory of fellow Louisville native and NRBQ co-founder Steve Ferguson, who died last October. “I play for Steve even when nobody knows it.”

Beyond that, Adams is likely to call just about any song ever written. One track on Crazy 8’s that reflects his wide musical tastes is “Imaginary Radio,” on which he dreams of a station that plays avant-garde jazz pioneer Sun Ra back-to-back with the Beatles. One presumes Adams’ iPod features such combinations.

“I don’t have an iPod, don’t have a computer,” he says. “But I’ve been combining things like that for years on cassettes. That’s the way I’ve always listened to music — whatever feels right. It’s fun to go from Brother Jack McDuff to Link Wray. Why not?”

Adams says the new band is looking like a long-term project, and a second CD is in the works. “We’ve been playing together for about two years. I found these guys the right way — not through try-outs, but through conversation and knowing what’s going on in their soul. Everybody’s heart is into the music.”