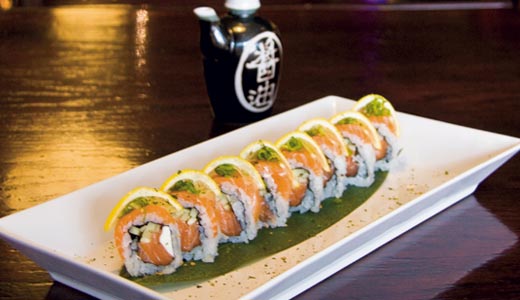 All right, who ordered all this raw fish? At the rate things are going, the city’s Bardstown-Baxter strip is going to have to change its nickname from restaurant row to something like … well, how does “The Boulevard of Bistros and Sushi Bars” sound?

The strip’s bubbling demographic stew of hipsters, punks, tattoo’d and pierced people with a healthy dose of aging hippies, slow-food types and upscale LEO-reading liberals brings it about as close as Louisville can get to the Upper West Side.

It’s only natural that sushi would have attained its firmest grip here, and indeed, Baxter welcomed the city’s first sushi bar, Sachicoma, back in the mid-’80s. Just about the time Sachicoma sputtered to its quiet demise, Sapporo arrived with its edgy style and superior sushi in 2001.

Sapporo dominated the strip for a while, but over the past couple of years, sushi started busting out all over. Oishii arrived in 2008, run by former chefs from Sapporo. Last year, Clifton’s Maido begot Dragon King’s Daughter on Bardstown Road, and we saw that it was good. The defunct Café Metro’s door now boasts a hand-lettered sign alerting us that Wild Ginger Sushi & Fusion is coming soon.

Now add Wasabiya, recently arrived in a Baxter Avenue storefront, former home of several short-lived eateries and bars, a spot that’s seen about as much turnover as a by-the-hour motel.

Wasabiya could have what it takes to stick, but not without overcoming a few flaws. We dropped in for lunch the other day and found a good-looking industrial-chic venue with a techno-pop vibe and enough offbeat and creative sushi to turn a planned quick hit into an indulgent, leisurely and appropriate-for-sushi pricey midday meal.

But I won’t say things were perfect. Service veered unpredictably between hyper and missing in action. Of greater concern, while all the fish we consumed was palatable, one or two of the items showed signs of age. That’s a markdown in any restaurant setting, but a double markdown in a sushi bar, where freshness is critical.

The sushi menu features a couple dozen nigiri-zushi (bite-size sushi on rice), mostly in the $3.95 to $4.50 range. There’s an extensive collection of maki-zushi (rolls). A shorter entree menu offers a relatively limited Japanese-Korean-American mix of options from $13.95 to $22.95, many of them featuring meat, chicken or seafood grilled with teriyaki sauce.

We couldn’t resist the special of the day, otoro carpaccio ($18), made from the relatively hard-to-find belly tuna, the richest and priciest cut of toro (fatty tuna). Six decent-size sliced sashimi ovals were arrayed on a plate slathered with olive oil and freshly toasted garlic chips, surrounding a mound of grated daikon radish and roasted red pepper shredded into saffron-fine strands, topped with sesame oil, radish shoots and Japanese chives. It was impressive, although we picked up just a whiff of old-tuna aroma on the otoro.

A couple nigiri-zushi pairs were well made. Red snapper ($3.95) was fresh and clean; mackerel ($3.95) was pretty, but its meaty flavor added an unfortunate fishy quality that barely passed my sniff test.

Yum Yum Roll stuffed with shredded “crab” and hot spices was pretty good. Japanese bagel roll seemed like a wacky concept, but the mix of cream cheese and smoked salmon (plus avocado and green onion) in a sushi roll worked out mighty well. (The two rolls came as the “Pick Two” lunch special for $9.95.)

Still, on the whole, it wasn’t terrible, and when it was good, it was very good. I’ll likely sneak in again later on and see if the freshness issue persists. I’ll let you know.