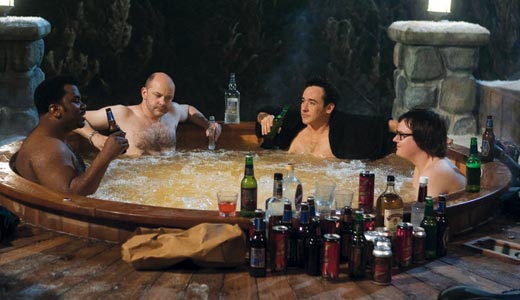 This terrific adult-male fantasy/comedy is sure to spawn a butt-load of imitators, but they’ll have a hard time matching the wit and energy of this rude-and-crude little gem. Three middle-aged buds — John Cusack, Craig Robinson and Rob Corddry — and a nephew head to a mountain resort for some drunken revelry, only to find themselves back in 1986 and able to rewrite their futures! The comic chaos that follows hits all the right notes: sexy, silly, smart, heart and ridiculous. The cast is brilliant, the script a work of genius — even the ’80s music somehow sounds good! A must-own.

Beginning of a new, flashy, kid-friendly franchise for director Chris Columbus, who launched the first Harry Potter movies. During a class field trip, a teen discovers that he is, in reality, the son of Poseidon. His best friend turns into a half-man/half-goat protector, and one of his teachers is a closet centaur. Lots of sparkly special effects, lively music and great adult guest stars (Sean Bean, Rosario Dawson, Steve Coogan, Uma Thurman, Pierce Brosnan, Catherine Keener, Joe Pantoliano, etc.) combine to create a spunky, imaginative universe full of fun and adventure. Buy it.

A NOCTURNE: NIGHT OF THE VAMPIRE

A truly unique and adult take on the vampire movie from Australia. Vanessa de Largie and Alex Spears are an undead couple struggling to cope with their affliction in a changing world. Not a gore-fest, but a thought-provoking look at what it means to be human. Imported by Troma Films.

This big-budget biopic on Charles Darwin’s decision to publish “On the Origin of Species” isn’t as factual as the box art would have you think — centered as it is on his “battle with God over the loss of his daughter” — but it makes a nice spot o’ drama, don’t ya know. Stars Paul Bettany as Charlie.

This sweet-natured indie comedy, based on a true event, follows three friends who come together to perfect and market a flying rocket belt one of them has invented. Stars Billy Crudup, Paul Giamatti and Kristen Wiig are having a good time, but the story focuses too much on the travails of business, rather than the rocket-driven action. Still, not bad; the “R” rating is bogus.

Too few viewers are aware that this is a remake of one of the most influential movies ever made. It was in the 1973 indie original that writer/director George A. Romero first proposed a possible cause for his now-famous zombie behavior, opening the door to thousands of similar — if less-scary — imitators (including “28 Days Later”). This big-budget corporate version starring Timothy Olyphant and Radha Mitchell is OK, but it pales in comparison to his truly frightening original vision. We suggest watching both!

THE DANCING BOYS OF AFGHANISTAN

“Bacha Bazi” — pre-teen boys, dressed as girls, who sing and dance before a crowd of men before being auctioned off for sex — is practiced only in Afghanistan (and some Fridays at the LEO office). This Afghani-made doc takes you inside the rough trade that has flourished once again in areas where the Taliban has been routed.

Is this a love story, a tragedy or a supernatural thriller? It’s all those and more as Conor McPherson weaves his tale of a haunted widower, attracted to a visiting horror-writer in a seaside Irish town, though she, in turn, is attracted to another man. A lot of people dumped on this slow, gentle movie, but it’s much better than you’ve heard.

THE TREASURES OF LONG GONE JOHN

A welcome documentary on the indie record producer who launched the careers of the White Stripes, the Dwarfs, Hole, Rocket From the Crypt and many others.

Jet Li, Andy Lau and Takeshi Kaneshiro star in this epic telling of “The Assassination of Ma” — NOT a martial-arts/Kung Fu/chop-socky flick, but a serious, big-budget war drama based on one of China’s most beloved historical myths. A cultural milestone.

We can’t find anyone who truly seems to understand what the hell this movie is all about. All we know is that it is in German and completely mesmerizing. In a pre-WWI village, strange, cruel and mysterious events seem centered around innocent children of a certain age. Filmed in spooky B&W, some viewers think God was punishing the children before they could grow up to become Nazis. Others draw different conclusions. The only thing we can promise is an engrossing adult experience. Recommended.