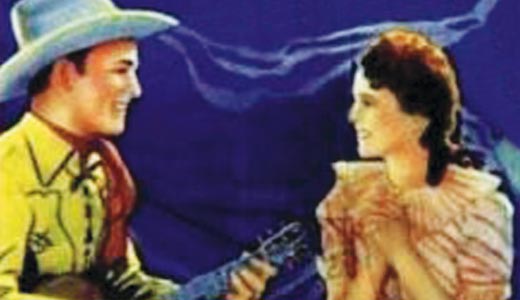 This little Roy Rogers/Dale Evans outing is just one of about 110 such singing oaters — and we recommend them all — but for today, it serves as a good excuse to tell you about their Louisville connection. Dale was born Frances Octavia Smith (or, in some references, Lucille Wood Smith) in Texas. By the age of 17, she had been married, divorced and had a child. By the time of her third marriage to Robert Dale Butts, she had become a big hit on Louisville radio of the ’30s, and it was here she first adopted the name “Dale Evans.” She went on to become a regular on the smash “Edgar Bergen/Charlie McCarthy Show,” dropping Butts along the way, and marrying Cincinnati boy Leonard Franklin Slye (Roy) in 1947. They were married for 51 blissful years. Happy trails, dear readers.

THE HAUNTING OF BARNEY PALMER

From the book “The Haunting by Margaret Mahy” comes this tame spooker about a haunted 9-year-old boy, co-starring local boy Ned Beatty. Beatty spent his childhood on the family farm in St. Matthews, singing at local shows and on street corners to make ends meet. This led to roles at small theater companies in Virginia, Texas, Pennsylvania, Washington, D.C. — and, of course, our own Shakespeare in Central Park where he remains its most distinguished alum. Director John Boorman gave him his big break as the buggered, pig-sqealing hunter in “Deliverance” (1971). He now plays bass guitar and stays the hell out of the woods.

While you probably never heard of this starring vehicle for Colin Firth, it garnered lots of Golden Globe noms for Firth and co-star Julianne Moore. He plays a bereaving gay college prof in L.A. during the Cuban missile crisis of 1962. Unbelievably schmaltzy, it is designed to make you cry. Chick flick.

This little-known adult romantic-vampire outing is the perfect tonic for all those sparkly teen neck-biters of late. Jason Mewes is a lonely night-shift paramedic who rescues Erica Cox — only to discover she is undead. But the real problem is … he really likes her. The whole thing devolves into a wacky look at our universal fear of commitment in the modern world. Worth checking out for Erica Cox alone. Nice.

This gritty, slice-o’-life NYC police drama with an amazing cast — Richard Gere, Don Cheadle, Ethan Hawke, Wesley Snipes, Will Patton, Lili Taylor — suffers more from having 13 friggin’ producers than any lack of talent. A tangle of three seemingly unrelated tales, they crash head-on at a major bust that goes sour, leaving half the cast dead and the remainder buried under a grating rap noise-track (interspersed with terrific doo-wop tunes and ’70s psychedelia). A good tale, to be sure, but simply had too many cooks stirring the pot.

The legendary first sequel to “Gamera The Invincible.” Freed from the oversized rocket-capsule that launched him into space at the climax of the first film, our favorite giant fire-breathing turtle returns to Earth to save us from an evil sub-zero lizard thing. The first Gamera movie shot in color, now available in an HD anamorphic widescreen release. Recommended.

JASON AND THE ARGONAUTS

Now available in a superb Blu-Ray print, the finest film Ray Harryhausen ever made. A who’s-who of superbly realized and animated mythological monstrosities wage war with Todd Armstrong and naughty Nancy Kovack in this non-stop stop-motion magnum opus. The climactic fight between Jason’s men and “the children of the Hydra’s teeth” — an army of skeletal warriors — is one of the wonders of modern cinema. An absolute must-own.

Not the wimpy U.S. remake, this is all 18 episodes of the original British hit on eight discs, with lots of great bonus material. A modern-day police detective is hit by a car and wakes up in 1973, where his 21st-century sensitivities are considered kinda wimpy. Can he survive in this world? Does he want to? One of the best TV series we ever saw. Our highest recommendation.

Veteran actor Richard Kiley, whose career dates back to the earliest days of TV, stars in this forgotten made-for-TV version of the Oscar Wilde tale opposite Shelley Fabres and Jenny Beck. A bit short at 56 minutes, but one of our favorite versions of the classic haunted-castle comedy.

THE GIRL WITH THE DRAGON TATTOO