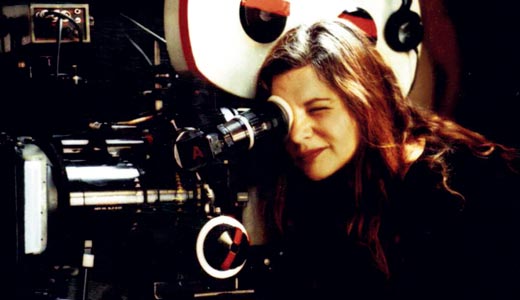 The only rules Allison Anders followed were the ones she set.

Following a childhood spent mainly on the road, Anders enrolled in UCLA Film School, where she wrote her first feature film, “Border Radio.” That early experience would shape her creative ethics through later projects like the 2001 Emmy-nominated film “Things Behind the Sun,” in which she directed Don Cheadle and Kim Dickens. Her work has crossed over into television, where she’s directed episodes of the late HBO Series “Sex & The City,” Showtime’s “The L Word,” and ABC’s “Men In Trees.” Last year, she teamed up with her daughter Tiffany to found Don’t Knock the Rock Music & Arts Festival in Los Angeles.

LEO: What makes a girl uproot from rural Kentucky and start hitchhiking across the U.S.?

Allison Anders: A couple of things. One is my mother — we moved around a lot. She was raised in Ashland, and, actually, our relatives go back really far in Kentucky, on both sides of her family and my father’s family, too. But she wanted to get to the ocean. So we went to Florida when I was 10. The pivotal moment before we left was The Beatles on Ed Sullivan for me. I managed to see that in Ashland, and then we moved to Florida, and then we started moving around. We moved back to Kentucky in ’68, and in ’69, there was the whole Paul (McCartney) is dead rumor …

I chart my life in terms of pop culture, so ’69 was that year. Then we moved to Arizona and finally made it out here. I was always trying to get back, so I came back a couple of times on my own. (Mom) never lived back in Kentucky again. I was going to bring her with me. I wanted her to see Louisville so much, because she would just love it. She lives in Portland (Oregon) now. Louisville reminds me of Portland in a lot of ways, but it’s Kentucky, so to me it’s even better.

LEO: Was your mother artistic in any way?

AA: She did not pursue an artist’s life, but she just retired, so she’s been painting. She was a folk singer; she was a great writer, so she actually could do it all. It’s kind of funny, because the rest of us can’t really do it all. She was a great inspiration for my cousin, Mark Fosson, who had a record out of lost masters that had been on Tacoma Records. Then Tacoma went under, and my daughter (Tiffany) discovered these masters of his … (She) got his demos to Drag City, and they released them a couple of years ago. He’s been playing for years, but these works — nobody had ever known. My mom had really always encouraged him, because he was very lanky and really wanted to play football, and she kept trying to fatten him up. When that didn’t work, she said, “Hey, take my guitar and learn how to play it.”

LEO: What was it like making “Border Radio,” your first feature film?

AA: Honestly, it was amazing, because I go back to that experience all the time to encourage me to realize you don’t have to wait for permission to make a movie. God knows nowadays you need even less permission, because back then, we were playing with film, which is costly and more complicated than using a digital camera.

We just recently discovered Kickstarter (a funding source for artists and entrepreneurs). (Longtime collaborator) Kurt Voss and I are going to do another movie again. He’s always wanted to do a trilogy of “Border Radio.” We’re about to embark on Kickstarter, which is the most phenomenal thing. You basically raise your money through donations from people. I remember making a list on sheets of paper and thinking, “If each of these people gave us $10, we’d have money.” What’s the big deal? Why are people so reluctant to do it? I do it. I gave money. I’m thrilled to do it. My boyfriend and I contributed to Diaspora to have a different alternative to social networking other than FaceCrap.

LEO: I’m quoting you on that, by the way (laughs).

LEO: Have you counted up all the references to Duran Duran in your films? Do you have a number?

AA: No, I don’t, but you know, when Kurt and I were making “Border Radio” — see, this all comes full circle, it’s creepy — my daughter, who’s a musician, she was 10 or 11, and she was really into X and Duran Duran. To us that was pop stuff that we weren’t into. But while we were writing, we started putting on the Duran Duran records, because they freed us up; they weren’t connected to what we were writing about. They were such good pop tunes in a way that the other work was not as freeing, because we were writing about it. Funny enough, there was Duran Duran, an odd inspiration for “Border Radio.”

Later, after Tiffany had grown up and wasn’t a teeny-bopper anymore, she was pretty entrenched in Dinosaur Jr. at the point that we met (Duran Duran bassist) John Taylor. He was still her Paul McCartney. We saw an amazing film about Duran Duran called “Three To Get Ready.” It hasn’t been seen in the way we saw it, and it was a terrific documentary on the Notorious tour.

LEO: In 2001, Don Cheadle received an Emmy nom for your film, “Things Behind the Sun.” Was there real-life inspiration to make that?

AA: I had been wanting to do something with a really personal crisis that I was going through — not a crisis, but the end of the crisis, and I was ready to deal with trauma and sexual abuse. I pretty much had the story down, but I wanted to make sure there was perspective. I outlined and then Kurt Voss wrote the first draft of the script longhand in Mexico. Then I kept doing more and more work on it. I met Don Cheadle at a wedding reception for Jennifer Beals. Two years later, I asked him if I could send him this script. (Co-star) Kim Dickens was someone that my casting director had found, and he knew her and had cast her before. There was no way to even think about anyone else once I saw her. She was so spectacular. I watched the reel, and I was blown away. Her and Don — that’s great acting, where I don’t see the process at all. I just see a character emerge from this person. I’m not seeing any baggage of who they are. To me it’s very rare. All the people I work with that I love, that’s what they do.

LEO: Which episode of “The L Word” did you direct?

AA: “Last Couple Standing,” the one where Dana has died and they’re all remembering her and throwing her ashes. I love those girls. They all loved each other and were supportive of each other. You had a lot of freedom as a director working on that show, and the actors really know how to keep it grounded.

LEO: Now you’re a teacher — what sort of things do you see happening in young filmmakers that are inspiring, and what do you tell them when they ask, “How do I get to where you are?”

AA: Needless to say, it’s invigorating. You see a whole new talent come to life. Used to be you could travel around forever as a filmmaker with your movie. I don’t know if that’s so much the case exactly anymore. But I never did it that much because I was already a mother. I just try and encourage them to follow exactly what they want to do.

With my writing classes, I just tell them to throw all the other shit out that they’ve learned. I respect that they will have to know certain things for other people, but in my class, (students) say, “Oh, well we’ve been told don’t put in too many personal details, or too much description.”

And I tell them, “I’m just going to assume that you are all making these films.”