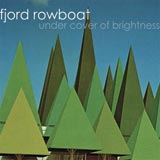 Toronto’s Fjord Rowboat takes its shoegaze seriously. 2007’s Saved the Compliments for Morning introduced the band as students of late ’80s-early ’90s Anglo-rock, but it allowed space for quieter moments. Arrangements on Undercover of Brightness are tighter and flood that space with reverb, compression and more reverb. From start to finish, every corner is filled with lush, ringing guitars that are seldom pasty, which troubled some ’90s shoegaze recordings. And unlike much of that era’s flaw/embrace to bury vocals behind walls of guitars, Craig Gloster’s voice is interesting enough to find its place in the mix, despite not reaching the arresting, dark forcefulness of Interpol’s Paul Banks or the Twilight Sad’s James Graham. Nothing in the lyrics grabs immediate attention, and the resulting songs prove the band are masters of the genre but lack much innovation: “Underwater Hero” and “When I Speak of Violence” take off like Swervedriver redux; “The Only Ones” sounds like a cut from Idlewild’s 100 Broken Windows; and “Outta My Control” is pure early Ride.