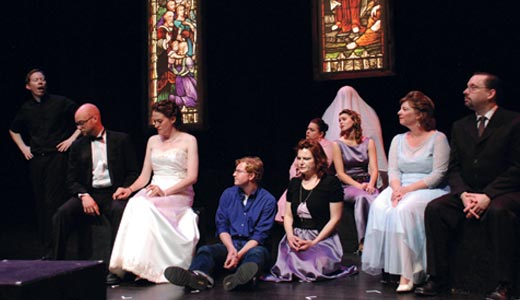 The Marriage of Bette and Boo
Presented by the Louisville Repertory Company. Written by Christopher Durang, directed by Brian Walker. Showing at Kentucky Center’s MeX Theater through June 27. Call 584-7777 or go to www.lourep.org for more info or tickets.

As I come of age, I discover the line between tragedy and comedy growing increasingly skewed. Laughter finds me at times of misfortune, tears find me at moments of joy, and it’s this uncomfortable uncertainty that ties together “The Marriage of Bette and Boo.”

While the marriage of the lead characters Bette and Boo was not successful, the show was. The theater was intimate, the set was minimal, and the performances were well executed. Among all the elements that make a great show, what made this play excellent was that I couldn’t stop thinking about it afterward. I was hooked.

Written by humorist Christopher Durang, the Obie Award-winning show tackles heady subjects like alcoholism, stillbirths, insanity and divorce, but it does so in the comfort of comedy. It was like listening to a scatterbrained storyteller. We all know one — the person who decides halfway through the story that there is necessary background to be told. The chronology of this production was all over the place — it started at a wedding, fast-forwarded 20 years, went back 15 years, 14, 13, 12, 11 … eventually ending up at present day. Under Brian Walker’s direction, the anachronistic sequence kept audience members on their toes, but wasn’t too distracting and was easy to follow.

The architecture of the play was impressive, but the characters of Bette (Amy Lewis) and Boo (Joe Hatfield) grew especially irksome. I think that was the point, though. People are annoying. Unlike watching a Disney movie where everyone is impressively clever and beautiful, Bette and Boo are unappealing and honest. Bette was a nag, and Boo was a drunk. While you’d hope two people with such flaws never find each other, often times they do. A considerable chunk of the play was a cycle of nag, drink, nag, drink. The other chunk was spent watching Bette try in stubborn futility to bear another child — four times. The real victim in all of this, of course, was the couple’s only surviving son, Matt (Todd Zeigler), whose circumstance, dysfunction and contemplation drove the plot.

However intolerable some characters, there were checks and balances. Boo’s overbearing and alcoholic father, Karl (Craig Nolan Highly), found his match in his wife, Soot (Becky LeCron), who always lifted the mood with her infectious laughter and dimwitted charm. And while there was the imperious Bette, there was her sister, Emily (Natalie Fields), who was hysterically preoccupied with apologizing.

Chalk up another success for the Louisville Repertory Company. What this play brought to the surface is that humor, however appropriate or inappropriate, is what gets one through life’s muck. “The Marriage of Bette and Boo” is not an escape but an embrace of reality, and it will run you through the wringer of emotions. It is certainly worth your time, tears, thought and laughter.