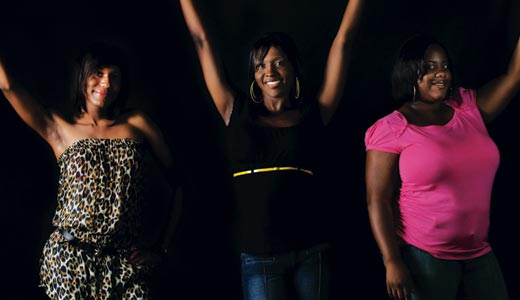 Once Sheila O’Bannon came to terms with what it meant to have a transgender child, and concluded that her faith could help her through it rather than make her feel ashamed, she decided her family’s story had to be told. But instead of writing an autobiography or going on some reality show, she worked from her most comfortable medium — she wrote a musical. It might seem an uncommon method of storytelling, but it’s Sheila’s department, having written plays for her church, and being a music minister for 30 years. “I haven’t written any books, but I’ve written an awful lot of plays,” she explains. “So I knew how to do that, and it was therapy.”

This piece, “The Prodigal,” centers on the life and gender transformation of Sheila’s daughter, Miyia, paralleled with some other stories of their family and friends, with all the names changed and some minor character adjustments. Miyia, who plays herself in the production, says she was nervous at first about making her story public, but she and her mother agreed it was time for someone to stand up, because the play could potentially help others facing gender identity crises and educate those who might not understand.

“At first, it was all about being careful,” Miyia says. “We didn’t want anybody to know. But I thought about how many people it could help — maybe people out there went through the same thing. So, that’s when we all agreed.”

Sheila, Miyia and her brother Rodney Noble each play the characters who represent themselves, but the rest of the cast consists of friends, relatives of friends and people they’ve known in the church music program — most with some sort of music, theater or dance background. After an entire year of rehearsing, the diverse cast has become close.

“We’re like a big family,” says Miyia. “It’s good to have such a support system of people — gay, straight, lesbian, bisexual, transgender, whoever — it’s good to have all those people together and to support each other like a family.”

Given the subject matter, I had certain ideas about what rehearsals for this show might be like. But their after-hours rehearsal space — the Jazzercise studio connected to Mom’s Music in Jeffersonville — was flooded with teenagers in jazz shoes, ladies in big church hats singing soulful hymns, and a team of choreographers huddled together on stools, pointing and yelling instructions. It was compelling, certainly, but also so lively, so Broadway. From the numbers I saw, the music was world-class and the choreography was solid. The cast members I talked to were thrilled to finally be opening this month at the Kentucky Center’s Whitney Hall.

“It’s kind of surreal,” says Morris Gibson, cast member and longtime friend of Miyia. “A lot of people have been working their whole lives to be at Whitney alone, and for us to get this opportunity is very exciting. I can’t really put it into words.”

But Sheila, Miyia and others are aware of how controversial the material might seem, and while they seek to educate and reach as many people as possible, they expect potential opposition, especially since this play boldly addresses LGBT issues and religion.

“We know that not everyone is going to receive this well,” says Sheila. “Everyone says, ‘Oh, this is a play that touches on homosexuality and the church,’ and we couldn’t help that, because we were in the church, and this story happened in the church. We don’t want to disrespect anybody. This play is not about whether or not a person believes homosexuality is right or wrong — it’s about understanding people and loving people.”

In addition to the great risk they’re taking by sharing this with the world, Miyia especially has found it challenging to relive and portray some of the most painful experiences of her life.

“At first, I couldn’t really open up,” Miyia says. “There were actually rehearsals where I broke down and cried just thinking about stuff. It’s been a long journey.”

The show is set to premiere in Louisville this weekend, and then they’re off to Atlanta. The show, which features songs by Grammy Award-winner J.D. Miller, is under the direction of dance instructor Carolyne Tilford. She only joined the group three months ago, bringing along a troupe of dance and drama coaches to put the finishing touches on the show, which Sheila and some of the actors had been managing themselves.

“They’re phenomenal,” Tilford says of the cast. “Their hearts are in it.”