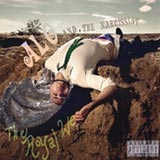 Alo and the Narcissist’s debut The Royal We is a less-than-regal effort, yet it experiments enough to win over a few fans of glam house. The flamboyant-for-the-sake-of-flamboyance attitude Alo Moniz spills into the music but gets washed out by an artist lost in a glitzy world. Citing Bowie, Bjork and Depeche Mode as influences, the fingerprints of the latter show up on The Royal We often in a much-too-derivative form. “Narcissist” is reminiscent of Fischerspooner’s Emerge while lacking the post-Information Age isolationism. The album toys with trip-hop but too often leaves it on the floor for a more talented producer to find. Like a box of shredded puzzle pieces, the components here don’t mesh. No surprise, though, you can’t spell almost without a-l-o.