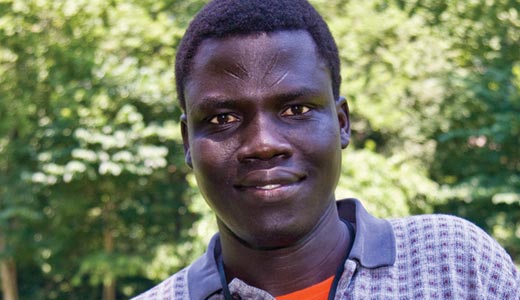 James Malou has a quick smile that could put anyone at ease. Though in his early 30s, there’s something young and jubilant in his expressions, as if nothing has been lost from this so-called “Lost Boy of Sudan.” Indeed, what a comfort it must be for the uprooted and persecuted to encounter his grin after a long trip across the water, which is Malou’s first task as a caseworker with Kentucky Refugee Ministries.

“It doesn’t pay (much),” explains Malou about his position at the nonprofit. “But if you see what you are doing, you are really changing lives. Because you are the first impression the refugees have — the way you pick them up from the airport; the way you take them to food stamp office; the way you orientate them to their new apartment — they will remember it the rest of their lives. When I came here, somebody did it for me, and I still remember.”

Malou is a Dinka, an ethnic group in southern Sudan known for fishing, building canoes and herding cattle.

In 1991, Malou’s entire family was killed in the Bor Massacre, an intra-tribal attack that resulted in tens of thousands of casualties over two months.

Years of conflict between the Arab Muslims of the North and the African Christians and animists of the South had sparked chaos, instability and violent uprisings throughout the country. Longtime Sudanese President Omar Hassan Al’ Bashir (the only current head of state to be charged with war crimes and remain in power) rules from the northern capital of Khartoum, but the country’s natural resources — including oil — reside in the impoverished South. In 1983, the Sudan People’s Liberation Army (SPLA) formed to declare war on the Islamic government, citing its active role in pitting tribe against tribe and destabilizing the southern region.

The result was more than two decades of civil war.

As violence escalated in the years leading up to the Bor Massacre, Malou’s mother arranged for her eldest son to flee for safety while she stayed behind with his younger siblings.

Malou would never see his mother or brothers and sisters again, becoming one of the Lost Boys of Sudan, a group of 27,000 young Dinka men displaced during the conflict.

“In late 1987, I left home when I was probably — I say probably because I don’t know my birthday — 11 or 10 years old. Back then we weren’t the Lost Boys of Sudan, like we are known now. We just showed up in Ethiopia as refugees,” says Malou. Unfortunately, Ethiopia soon became mired in its own struggles and had to empty all refugee camps in 1991.

Malou joined about 1,000 other Sudanese refugees in attempting to return home.

“We crossed (back to Sudan), and the government militia approached us,” he recalls. “We were resting under a big tree, and they just opened fire.”

Seven people were killed in the attack, later buried in a mass grave. Several others — including Malou — were injured.

“It was July, and we have a very tall grass in Sudan, tall as a man. I thought if you go inside, maybe nobody could see you,” he says. But the tall grass did not protect him from the hail of gunfire.

A blast from an AK-47 passed through Malou’s armpit and exited above his left shoulder blade. For five days, the wound went untreated. “After I was shot, I crawled to a spot nearby. I couldn’t go anywhere. I just hid in the bush because I was bleeding too bad… We stayed there for one night, and then left in the morning for Kenya.”

By the time they reached Kenya, Malou could no longer feel his left arm, which he had tied to his torso using a rope. The Red Cross transported Malou and other wounded refugees to a medical clinic, where he spent one month recovering.

Malou ended up at a refugee camp in Kenya, which is where he was upon learning of his family’s fate.

“I internalized my anger and fear,” Malou says. “I didn’t want to talk to people. I was just quiet. I slept beneath the mosquito net all day.”

At the time, he was determined to get revenge, although he never would return home.

It would be several more years before he successfully attained refugee status in the United States, landing in Louisville in 2001.

Dinkaland is a formidable place for any wandering orphan, even without the menace of roaming warlords. Though lush with rivers and rolling savannahs, Dinkaland — comprising 100,000 square miles of southern Sudan — is home to lions, hyenas, leopards, poisonous snakes, scorpions and other wild creatures. The wet season floods the Nile and its tributaries, leaving vast tracks of impenetrable swamps. Throughout the ’90s, the adolescent Malou survived these perils as he trekked between refugee camps in Ethiopia, Kenya and Uganda.

In the camps, Malou survived on small rations of corn or rice. On a good day, the refugees would kill a deer or forage for rok fruit (a type of date). On bad days, they ate leaves. Despite the hardships, Malou managed to pick up a few valuable commodities in the camp classrooms, including rudimentary knowledge of English, science and math.

Although makeshift, the school established a formal hierarchy: Older students were responsible for helping teach those in the grade below. The education paid off for Malou, who eventually tested into a boarding school funded by a humanitarian organization. While at boarding school, Malou became reacquainted with his future wife, Nyawut, whom he had known as a child back in Bor.

Just one month before Malou was set to graduate, the boarding school shut down.

Eventually, however, he would resume his role as student, ultimately earning a bachelor’s degree in psychology with a minor in biology from the University of Louisville, a feat he never anticipated during his time in the refugee camps.

Malou, who’d only seen television twice before arriving in the United States, now jokes about his first encounter with a computer. In Kenya, the teachers explained computers as doing everything people do, only faster. So when he was shown his first computer lab at the Louisville nonprofit Catholic Charities, a bewildered Malou asked, “Is this a computer? That does not look like a human being.”

They had to explain that computers are machines, not people.

“Life in America was overwhelming, considering where we came from, which was just simple. At night (in Sudan), if it is dark, it’s dark. You have to cook while the sun is still there. But here, if you want to stay up all night, you can do that.”

Malou quickly mastered English and earned his GED. After two years at Jefferson Community and Technical College, Malou started working nights at UPS to cover his tuition at U of L. Though now a full-time employee at Kentucky Refugee Ministries, he still works the graveyard shift at UPS to save for a house for Nyawut, who is expecting the couple’s first child.

As our conversation closes, I ask Malou what changed his mind about seeking vengeance in Sudan. He does not remember any specific event, saying only that his attitude changed. After a pause, he scratches the scar under his arm and says, “When I learned about my family, I was really engulfed in anger by that loss. I thought that when I grow up, I will join the military and get my gun and fight.”

But those feelings subsided with time, in large part due to the aid he received from humanitarian groups.

“I said to myself, ‘A bullet entered through your armpit, didn’t go through your heart or your lungs, and you survived.’ I realized maybe God does not want me to seek revenge, and now I don’t see anything so important about becoming a part of the destruction. So that is path that I have taken.”