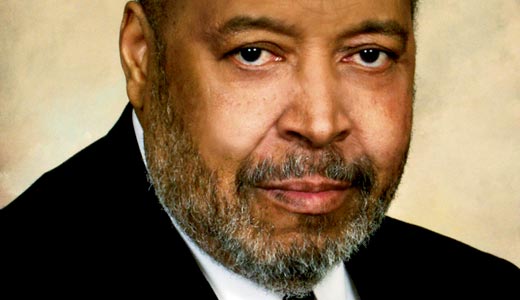 George Unseld fought to pass the 1999 Fairness Ordinance that made it illegal to discriminate against gays, lesbians and transgendered people.

Whenever George Unseld was about to make a point in City Hall, the usually reticent lawmaker stood up slowly. Known to be reserved and introspective, the 6-foot-7, all-state center from the Newburg neighborhood understood that in politics, as with basketball, size does matter.

“George certainly knew how to use his large stature and persona in a political way,” says state Rep. Reginald Meeks, D-Louisville, who served with Unseld on the Board of Aldermen. “I’ve seen him stand up and over people purposefully. And he knew how to use that effectively, but it was tactfully done.”

In the early 1960s, Unseld was a star athlete at Seneca High School and later the University of Kansas. After leading the Jayhawks in scoring his first two seasons, he turned his attention to the civil rights movement. He was arrested for protesting against racial discrimination in the school’s fraternities. Eventually that activism led him off the basketball court and into the halls of public service.

As councilman for Louisville’s 6th District, Unseld made equality a centerpiece of his legislative platform. In the wake of his sudden and tragic death on June 10 at age 66, friends, family and former colleagues are left to mourn and contemplate his legacy and the task of filling his shoes.

For many, Unseld’s commitment to young people and senior care in neighborhoods he represented will be the first thing remembered. Others believe his support of civilian review of Metro Police deserves an honorable mention. Arguably, Unseld’s greatest citywide accomplishment will be the integral role he played in passing the Fairness Ordinance in January 1999.

Gay rights activists had lobbied the Board of Aldermen for years to pass a law that would prohibit discrimination against gay, lesbian, bisexual and transgender people. For just as long as the ordinance failed to pass, gay rights opponents made deleterious claims and protests despite high-profile cases of discrimination in housing and the workplace.

In 1998, Unseld replaced then-Alderman Keith Allison, who vacated the seat to run for county clerk and had abstained from voting on the proposed ordinance the year before. Unseld’s election and other key additions, however, changed the board’s makeup.

Fairness Campaign director Chris Hartman says that Unseld was an early advocate for the ordinance and gay rights. “When it wasn’t popular at all, he took a bold and firm stance that endeared him to the LGBT community, which has always known he was one of our strongest advocates,” Hartman says.

“When George and I first started serving together, I didn’t know if he was going to be Fairness friendly,” says Denise Bentley, a close family friend who served with Unseld on the Board of Aldermen and Metro Council. “But I will never forget: We had a meeting in my living room with Alderman Meeks and Alderwoman Tina Ward-Pugh. We were debating who would introduce (Fairness) from the floor. And George said he was going to do it. I mean, he was adamant. And as the senior leader, he said, all the other members will think twice about opposing it. And he never bent on that issue.”

At the time, a great deal of opposition to the ordinance came from the African-American community, particularly among its religious leaders. Unseld never wavered. “We’d get crazy calls saying, ‘We’re going to vote you out of office, and God is going to deal with you.’ And George would tell them he’d deal with it. Then he’d hang up the phone,” Bentley says. “That was George.”

Last week, Unseld attended the Democratic caucus meeting as usual and was alone in his third-floor office. About a half hour before the council meeting started, Councilwoman Madonna Flood, D-24, and caucus spokesman Tony Hyatt heard the councilman fall and cry for help.

Councilwoman Vicki Aubrey Welch, D-13, a registered nurse, was called to his office and began administering CPR while Councilman James Peden, R-23, a volunteer firefighter, retrieved an oxygen mask from his vehicle. By the time EMS arrived to take Unseld to the hospital, he was unresponsive. He was pronounced dead at 6:47 p.m.

“What bothers me the most is to know he was by himself,” Bentley says. “I mean, between his daughter, his legislative aide and I, we tried our best to take care of George.”

A series of health problems plagued Unseld’s personal and political life, which began during his first term on the council. After the first of two knee surgeries, he contracted an infection that resulted in metal rods being implanted in his back and damage to his kidneys. He was on dialysis and later diagnosed with diabetes and skin cancer.

Despite his illnesses, Unseld continued to serve. Council records from 2009 showed him missing only a handful of committee meetings, and colleagues recall he was more dedicated to the job than before.

“With respect to George, he had a great sense of humor and was a man of high intellect and character,” says Councilman Jim King, D-10. “But I was always impressed that even though he felt bad, he was out in the district and in City Hall doing what needed to be done.”

His council seat now vacant, those interested in filing for it have two days left to submit their resume with the council clerk’s office. The council will have 30 days to review those applications and pick Unseld’s replacement, who must be appointed by a majority vote.

Given the circumstances surrounding his death, council members and aides are still shaken by the loss.

“It’s going to be an emotional situation for sure,” Hyatt says. “Everyone is aware of what their responsibilities are in picking a successor for Councilman Unseld and the importance of having representation for the 6th District, but it’s still very emotional.”

Residents in the district are worried their issues will fall through the cracks once a new council member is selected. Whoever takes Unseld’s place could have different priorities, and community activists feel they’ve lost an advocate.

“Hopefully, their interests will be the same,” says Robbie Bell, president of the California Block Club Federation in the California neighborhood, where revitalization is a top priority. “Councilman Unseld really had his teeth into what was needed and what was on our mind. I’m worried about whoever will replace him. That new person will have to learn the neighborhood and actually come down here.”

Residents there will work with whoever is selected, she says, but Unseld’s death has dealt a significant blow. “We’re going to miss him greatly, and we’re going to have to give that new council member knowledge all over again,” Bell says. “That’s a presence we’ll all miss.”