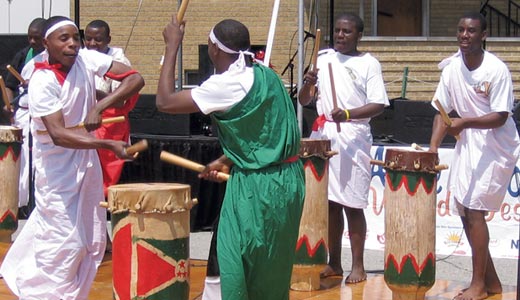 Artist Amanda Church has painted many things in her lifetime — dogs, flowers, eyeballs, trapezoids — but this exhibit at Day’s focuses mainly on man-made structures like buildings, water towers, bricks and cemetery stones. “I’m drawn to them because of design and the way sunlight absorbs and reflects,” she says of the everyday objects. Some of the pieces, which are acrylic on masonite and canvas, transcend beyond the brick and mortar. “Hope,” a painting of the Hope Water Tower in Germantown, has a personal tie with Church. “My mom is buried in Hope, Ind., and it’s a special word for me. After passing by it many times, I knew it was something I wanted to capture.” —Sara Havens

If you ever wondered how many times Rahm Emmanuel said “fuck” in 2009, then by all means, pick up a signed copy of Jonathan Alter’s “The Promise: President Obama, Year One” and highlight away. The former Newsweek reporter exposes the first year of the Obama administration, warts and all, providing a fresh, in-depth account of the White House post-Bush that’s as free from ideology as I’ve yet seen. In addition to f-bombs, other salacious details include infighting amongst the Clintons; displays of arrogance at the Copenhagen climate change conference; Obama’s support for the war in Afghanistan; and how he basically informed W. he was going to be in charge — six weeks before the ’08 election. Alter will speak, with a book signing to follow. —Jonathan Meador

Understanding the complexities of what was the African-American experience in the earlier years of our country doesn’t have to be restricted only to the month of February. The Juneteenth Legacy Theatre makes sure of that. Kentucky’s only professional African-American theater company returns for its 11th annual festival with productions of its best Jamboree plays performed. The theater will once again bring iconic characters like jazz singer Bessie Smith and civil rights activists Mamie Till and her son Emmett to life in these tributes to the triumph, celebration and pain experienced by those featured. Written by African-American playwrights, the mere history of each performance is well worth the trip. Workshops in acting, auditioning and playwrighting will take place as well for $15, or $35 for all three. —Whitney Spencer

“I was wondering what people back home were thinking.”

Home for Angie Reed Garner is the United States, specifically Louisville. She now lives in Abu Dhabi in the United Arab Emirates. To create her latest mixed-media work on paper, she took her inspiration from family, friends and collectors. “The ‘Prompted’ series is different,” Garner explains. “The idea was to do something interactive, something that helped me reconnect with the United States. After nearly three years in Pakistan and the Middle East, I was wondering what people back home were thinking, and what they wanted from art right now. I (invited) words, phrases and images. Actually, they gave me songs as well.”

Photographer Kris Gebhardt and his wife, Angela, a painter, have decided Louisville is indeed “Possibility City.” These multi-talented people (author, hair salon owner, fitness expert) were looking for a city in which to open a gallery. They thought about Miami, Indianapolis and Chicago. The East Market District, aka NuLu, won their hearts.

“It was no question after seeing NuLu,” says Kris, a former Louisvillian. “We looked at the space available and said, on the spot, ‘We’ll take it.’” Luckily they know a little something about renovation, after being part of the team that worked on the French Lick Springs Resort in Indiana (repeat: multi-talented).

Local painter Jarret Marshall has joined them, making it the Gebhardt-Marshall Gallery. Stop by and meet the newbies during the June 4 First Friday Trolley Hop. —Jo Anne Triplett

SXSW 2010’s best showcase didn’t happen at some drunken club on Sixth around 1 a.m. It was an early afternoon set by Louisville’s resident Swiss Army Knife. A go-to for Ben Sollee, Daniel Martin Moore, Bonnie “Prince” Billy, Arnett Hollow and newcomer Saredren Wells, Cheyenne Marie Mize takes her (long-overdue) position at center stage Friday when she celebrates the local release of her solo effort, Before Lately. Playing all the instruments herself, Mize’s intimate approach revels in charm, place and style, and although she’s not yet 30, her voice hangs with some of alt-folk’s oldest souls. She’s recently signed to SonaBLAST! Records, so look for a national release of the CD later this year. She won’t stay a secret for long. —Mat Herron

One of the best ways to enjoy a summer day is a stroll down the bustling Bardstown Road area. With the Bardstown Road farmer’s market and Louisville Clay joining forces for the second year to bring locally produced veggies, flowers and an array of hand-crafted, artist-designed pieces of fine pottery made especially for use at home or in the garden, this is one stop Louisvillians will love. The chairwoman of Louisville Clay, Linda Bowman, believes what makes this unique is the connection between the farmer’s market and Louisville Clay. “We both work with our hands, depend on the gifts of our earth for our livelihood, and both are part of the emphasis to buy local first.” Separated by a quick stroll across the street, you’ll be able to enjoy just a bit of the best local produce and artistry the city has to offer. —Whitney Spencer

Louisville pride is certainly strong and united, but it also transcends into subsections on occasion. You’ve got the Highlands, the West End, Germantown, but coming up it’s all about Portland. The neighborhood get-together-turned-festival exceeded 70,000 attendees last year, with proceeds going to charity programs that benefit the community’s less fortunate. Last year’s donations amounted to $6,000.

The Portland Fest has been happening for the past 35 years, giving the people who currently live, grew up, or just spent time in the hood a chance to reunite and reacquaint. There’ll be live music by Rivershyne, The Epics, Idlemindz and more, food, drinks, a casino and even a parade at noon on Saturday. —Jess Mahanes

It’s summer vacation! You going to Spain? Jamaica? Yeah, me either. But you can turn off the damn Travel Channel, let your passport continue to collect dust and head to the South End for the 20th annual Americana World Festival, “Where Louisville Meets the World.” Having grown drastically from a block party on Southland Boulevard, it keeps the same agenda. “The intent was always to bring people together,” says Americana board member Sharon Landrum. “It was an opportunity for groups that didn’t normally interact to experience one another’s culture through dance, food and art.” The festival will include a soccer tournament, kids’ activities and performances by Coco Yam Band (Afro-Caribbean), Cypher Divine (hip hop), Sommer (Iraqi), Appalatin (bluegrass and Latin fusion), Kyene Drum Ensemble (West African) and Salsa Rhythms (Puerto Rican). —Jane Mattingly

Just a few weeks ago, our beer curmudgeon (and I mean that in a good way) Roger Baylor was expounding on the multitude of beer festivals invading our weekend plans. One such event — one of my favorites — is Keg Liquor’s Fest of Ale, which takes over the lawn of St. Anthony’s Catholic Church in Clarksville on Saturday. Stumbling around knocking back samples of delicious craft beers is always a good time no matter how thick the humidity. Even a looming thunderstorm didn’t stop me from the Fest of Ale three years ago. More than 40 breweries and three craft brew distributors are expected, and the church will be serving up hot dogs and hamburgers to help soak up the suds. Proceeds benefit Crusade for Children. —Sara Havens

Sludge sums up what Mike Sullivan, 41, has crawled through since 1992: drugs and personal problems within his group, Eye Hate God; his house burning down post-Katrina; and a stint in jail during the aftermath. A friend living outside Lake Pontchartrain took him in, the band is writing its first album since 2000, and this tour finds the group using new jams to rise above its tumultuous history. Like many New Orleanians, he’s wary of outside perspectives, in print or on celluloid. Of HBO’s “Tremé”: “There’s a lot of controversy about that because it seems every time there’s something about New Orleans, it’s hard for them to get it right. It seems like there’s no crime at all in this show, and it’s made by the guys who did ‘The Wire.’” —Mat Herron

Daniel Snaith, more fondly known as Manitoba or the mastermind behind the music of Caribou, named his latest album after his favorite hobby — Swim. His other hobby: creating No. 1 records — like Swim, Andorra and Milk of Human Kindness both topped college charts for weeks. The 32-year-old Canadian-born Londoner is traveling with a full band on this tour, and you can bet beats-per-minute will be spot on, given his doctorate in mathematics. Toro Y Moi opens the show with their own take on effects and sampling. With Abbey Road and Reggae Fest still in the air, this kind of electric, acid-house undertone is apropos. —Jess Mahanes