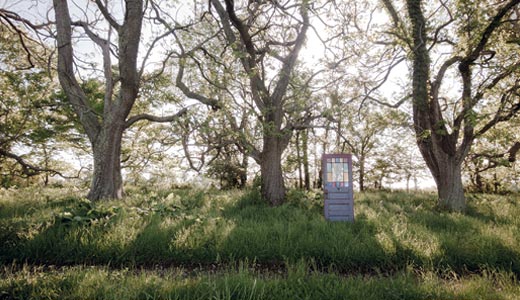 When First Baptist of Ivy Gap gets struck by lightning and most of it burns down, the men of the congregation are still standing around inspecting the damage with their arms crossed while the women have decided to take the matter into their own white-gloved hands. Lead by the pastor’s valiant wife, Edith, the church ladies arrange an evening of entertainment to raise money to rebuild their sacred space — and to showcase the congregation’s unrevealed talent. However, the board of deacons might not be down with a bawdy song-and-dance number, and things start to get rocky within the group. Word is that the show is dramatic, thought-provoking and too funny to be offensive. Amen! —Jane Mattingly

If any region in the world had the ability to leave a taste in your mouth, it’d be Southern Indiana. Come on, not that way. I mean in the Indiana strawberry, home-harvested honey and a bottle of blackberry wine kind of way.

This event, which debuted just last summer, will provide grub and drink from more than 20 different “tasty,” for lack of a better word, local enterprises (including Hob Knobb Roasting Company and Magdalena’s Café, my personal favorites). Interfaith has a couple more things up their sleeve, too. The Jamey Aebersold Quartet will be providing the musical entertainment for the evening, alongside a silent auction. Up for bid are swanky hotel stays and a ride in a private airplane. Seriously, a ride in an airplane. Tickets can be purchased via phone reservations, and also online at interfaithinc.org. —Jess Mahanes

Millions of people across the globe are forced to flee their homes each year to escape war, famine and fear of persecution. For the past two decades, Kentucky Refugee Ministries has been working to provide a new home and safe haven for more than 6,000 refugees right here in Louisville. On Friday, the local nonprofit will host a potluck picnic to honor these courageous men, women and children as part of World Refugee Day, an international celebration started by the United Nations back in 2001. Picnic-goers are asked to bring a dish to share at the event, which will include a client and staff soccer game, children’s activities and live music. In case of a downpour, the picnic will be held at Highland Presbyterian Church, 1011 Cherokee Road. —Sarah Kelley

As an urban Louisvillian, the closest you’ve probably come to kayaking is getting drunk on the Belle of Louisville — unless you’re one of those outdoorsy urban-types, in which case “The Eddy Feeling” might come as a welcome surprise. As the first film to probe the philosophical and emotional impact that paddling in a tiny fiberglass vessel can have on the individual, “The Eddy Feeling” showcases not only a bunch of sweet footage of fast-moving water, but also the lives of the people who feel compelled to fight against that fast-moving water, including brothers Tom and Jaime McEwan, who made the first kayak descents into North Carolina’s Linville Gorge, aka “The Grand Canyon of the East,” almost 30 years ago. After the screening, be sure to ask filmmaker Spencer Cooke what kind of gear you’ll need to tackle the Falls of the Ohio (besides, of course, a Hazmat suit). —Jonathan Meador

Right as singer-guitarist Mark Tester’s previous project was coming to a close, he found a haven in Indianapolis’ skewed pop scene. In short order, he joined up with drummer Amy Crouch and bassist Brian Allen to form Burnt Ones. Their debut, Black Teeth & Golden Tongues, arrives next month on Roaring Colonel, the label run by Dodge from My Old Kentucky Blog. The trio’s sound is reminiscent of early Jesus & Mary Chain. Tester says he paid more attention to producers than artists growing up, and it shows in Burnt’s shoegaze vibe. Lexington’s Chico Fellini and Dangerbird join in. —Mat Herron

If this summer has you seeing stars, consider taking a gander at this year’s Galileo Celebration Weekend sponsored by the Italian Cultural Institute of Louisville. The three-day Galileo hoopla will observe the scientific icon as an astronomer, inventor and key figure of his time. Events include lectures from scholars in the field, a “tour of the universe” at U of L’s Rauch Planetarium, stargazing and a build-your-own telescope workshop. The events on Friday and Saturday are free and open to the public but require reservations in advance. So, if you’re looking for something fun to do with Dad, or seeking intellectual stimulation that will surely make every nerdy nerve in your spine tingle, e-mail [email protected] to reserve your spot in the sky. —Rosie Haney

It’s been five years since WHY Louisville opened their doors in the Highlands to clothe hipsters, teens, out-of-towners seeking souvenirs and everyone else proud to boast their hometown city across their chest. Although the store caught on quick and even relocated a few doors down, the concept has remained the same — a retail outlet for Louisville artists to showcase their work. “Not everyone can afford a piece of original art, but they can afford a T-shirt," says owner Will Russell.

Saturday’s five-year anniversary party includes appearances by The Bearwolf, the friendly store mascot, as well as Abraham Lincoln and Col. Sanders impersonators. Why? Your guess is as good as mine. And while supplies last, you’ll get a free T-shirt with every purchase. —Sara Havens

Contrary to the Beyonce-isms of our time, jazz vocalist Janis Carter seeks to portray herself and her fellow female singers as “girlfriends” rather than divas. She first produced an all-female jazz show in Las Vegas in 1995 and has performed around the country, pulling from a pool of about 15 women since then. Louisville is the first stop of this year’s tour, where she’ll perform alongside Robin Shaw and Tanita Gaines for a Father’s Day special and fundraiser for the Ebonaise Social & Civic Club. “It’s not just for women,” Carter says, “but jazz lovers, blues lovers, fashionistas and theater goers.” Expect covers of legendary jazz and blues singers, with a special tribute to all the dads in the house. —Jane Mattingly

Recreational facilities for the 40 kids who live at St. Joseph’s Children’s Home in Crescent Hill need a facelift, and Steilberg, a Buechel mainstay, is coming to the rescue. Fingerstyle guitarist Craig Wagner (The Java Men, Liberation Prophecy), banjo player and singer Mick Sullivan (Squeeze-bot, Fire The Saddle), Joey Burchett (The Mandelbrots) and more pick from the catalogs of The Beatles, Chick Corea, George Phillip Teleman and Earl Scruggs. Great music, great cause. Seating is limited. If you miss this (which you shouldn’t), Sullivan and Burchett are part of Starduck Charities, which takes donations each August at St. Joe’s annual picnic. —Whitney Spencer

Dreams have been a source for visual art since, well, there’s been sleeping artists. It makes photographer Nick Thieneman work hard during his waking hours.

“Through these photographs, I seek to share my passage into worlds I travel to via sleep,” Thieneman explains. “Often in dreams, I end up wandering recurring places, and these ‘dream worlds’ exist in reality, mostly constants from my childhood. The actual doorway that lets me come and go is from the Fisherville home I grew up in.

“I’d also like to add that this wasn’t an easy project due to the fact that I literally carried this door to every place I photographed. Also, no Photoshop was used to create these — that would have made it easy and uninspiring.” —Jo Anne Triplett

J. Daniel Graham loves a good story — he just prefers not to tell you what it is. There’s just enough narrative in his art to draw you in, then it’s your job to flesh it out. It does require a bit of mental heavy lifting.

“My work is an investigation of comparative relationships through personal narratives,” says Graham. “I force comparisons in hope of a defensive dialogue coming forward to defend the visual narrative as a valid interpretation of each personal investigation.

“Whether in the form of sculptural autonomous machines or variations in printmaking, my work is based in storytelling. I come from a family of storytellers and sharers. My mother is the one who introduced me to making things, my father taught me how to fix just about anything.” —Jo Anne Triplett

In conjunction with the Summer Reading Program, the Louisville Free Public Library is going “green.” The Eco-Friendly Art Invitational will include an array of original artworks that were produced with, on or made of re-used, recycled, recyclable, eco-friendly, bio-degradable or renewable materials. Now that’s a mouthful. Take part in their “Think Globally, Read Locally” program and support artists who are doing their part to create amazing art with the planet in mind. —Whitney Spencer