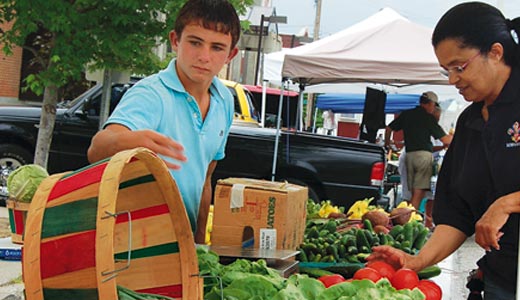 On an overcast, windswept Thursday morning, patrons stroll down the makeshift asphalt aisle of the Gray Street Farmers’ Market amid the towering structures of downtown Louisville’s medical district, inspecting farmers’ wares, chatting about recipes, and marveling at an array of organically grown produce.

“Take a look at this sucker,” says vendor Ron Smith, holding (with both hands) a gigantic tomato courtesy of Jackson’s Produce in Borden, Ind. “Big enough for ya?”

But despite accepting food stamps, a quick look around reveals the market remains overwhelmingly dominated by business types and hospital personnel paying with cash or check card. Add to this the relative novelty of local farmers markets accepting government-subsidized food benefits — only six out of 29 Louisville markets welcome them — and it’s clear there remains a significant challenge to bring healthy food to the city’s poorest citizens.

By last Thursday’s end, EBT purchases to-date totaled $220 — just 5 percent of the Gray Street Market’s overall income of $4,000 since opening for the season on May 20. While 5 percent might seem a drop in the bucket, market manager Melissa Schreck points out that it’s “5 percent that didn’t exist before,” and she looks forward to watching that percentage grow.

“What we’re looking at is the increase over the six weeks since we’ve started,” says Schreck. “We continue to see more people doing EBT purchases than when we started. There’s a patience there, where we have to do the outreach. Sure, we would like there to be higher participation rates, but you have to keep in mind that we’re just six weeks in…”

Schreck, who also works in the University of Louisville’s School of Public Health and Information Sciences, says she heard about the grant opportunity only after some colleagues brought it to her attention.

“Louisville farmers markets hadn’t been made aware of (the grant),” she continues. “I didn’t find out about it until some fellows here tracked down the information. It’s like with anything: You have these great resources available, but if nobody knows how to access them, then those resources are wasted.”

The 2010 State of Food Report, which was released earlier this month by the Mayor’s Healthy Hometown Movement and provides “a snapshot of food access in Louisville,” suggests the challenge to curb our unsustainable and belt-busting caloric intake is more of an all-out war: In 2009, SNAP redemption in Jefferson County totaled $60 million for 47 “Super Store” grocers, whereas Louisville’s SNAP-participating farmers markets (there were three at the time) totaled about $5,500.

“Our Food In Neighborhoods Committee is working on some outreach strategies in the neighborhoods that surround the markets to increase awareness of payment options,” says Marigny Bostock, community health specialist for the Mayor’s Healthy Hometown Movement.

“For example,” Bostock says, “we went out to the Smoketown neighborhood … and passed out fliers. Just from that, within one week we saw a 10 percent increase in EBT usage at the Gray Street Market. We hope we continue to see that success.”

For the past five years, the Smoketown-Shelby Park Farmers’ Market has been quietly accepting an array of state-subsidized food benefits, including EBT, WIC and senior vouchers.

Bell estimates that on an average Saturday, about $40 in food stamps are used at the Smoketown-Shelby Park Market.

Unfortunately, there’s no data to discern how many federally assisted Louisvillians the Smoketown-Shelby Park Farmers’ Market — or any local farmers market for that matter — has provided healthy food to because, as the Center for Health Equity’s Josh Jennings explains, the city really hasn’t been tracking those numbers.

Louisville Metro Public Health and Wellness has conducted “some surveying” of farmers markets recently, Jennings says, but they haven’t managed to collect enough information to figure out how people are spending their money, what they’re eating, or how they’re eating it — not yet, at least.

“As we move into improving access to healthy food,” he continues, “and not just to farmers markets, but to community gardens and kitchens, we’re trying to actually teach people what to do with the food once they get it.”

And to that end, the Center for Health Equity has sponsored cooking workshops with local chefs, helping bridge the gap between farm-fresh and table-ready.

Jennings also says the city needs to strengthen its relationship with the Kentucky Farmers Market Alliance, the organization which provided the EBT
card readers.

“There’s a lot of farmers markets that didn’t even know that (grant) application existed,” he says. “So getting with them is crucial.”

“We do have funds to help more Louisville markets do this,” Eaton says. “All they have to do is join our organization. If they’ll give us some data every year, and if they’re willing to pay the $45 a month service fee (for the card reader), then they’re in.”

According to Eaton, the Kentucky Farmers Market Alliance has enough grant money for an additional five free EBT card readers, but laments “it’s been difficult for us to figure out a way to reach the markets in Louisville with such a limited staff. I can’t go up there and bang on the doors of all of them.”

Eaton also says that because there is no high-level coordinator for farmers markets in Louisville, opportunities like the EBT grant (and many others) simply are overlooked.

“They say, ‘We’re already doing everything that our volunteers and our manager can do.’ Markets don’t have large staffs of people,” she says, “and they don’t have the time to write grants. If Louisville would really want to get on the stick with it and appoint a champion for farmers markets, then we’d be getting somewhere.”

But Schreck — who in addition to managing the Gray Street Market serves on the city’s Food In Neighborhoods Committee — sees it a little differently.

“I think anyone who actually operates a farmers market is a champion for local, healthy food,” she says. “That’s what the (Food in Neighborhoods) committee has: a network of impassioned people who try and move this cause forward. I hope we just keep growing and strengthening