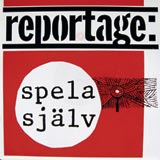 Among many forgotten musical innovations of the 1960s, perhaps the most obscure was that of audience-driven free improvisation. Groups such as Musica Elettronica Viva (consisting of American expatriate composers living in Italy) encouraged attendees at their gigs to become part of the performance, and more “out-there” psychedelic rock groups such as The Red Krayola and Cro-Magnon invited non-musicians to join in. Some of this music is only successful as an experiment in democratization, yet some can be fun to listen to. Reportage: Spela Sjalv (which translates to “reportage: play yourself”) is such an album. Edited and compiled by Swedish composers Bo Anders Person (who also played in Trad Gras och Stenar and Parson Sound) and Solvieg Bark, the album consists of many outdoor jams, akin to a rural, Swedish-folk influenced Amon Duul, interspersed with the sounds of children.