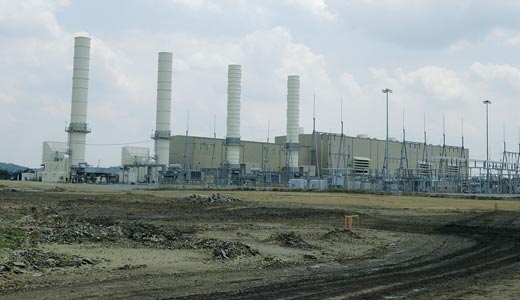 When Miranda Brown was a student at George Rogers Clark High, a chemical accident in the science lab temporarily shut down the school.

“A student had brought a thermometer from home,” recalls Brown, now a junior Spanish major at Murray State University and member of the progressive grassroots organization Kentuckians for the Commonwealth. “The thermometer broke, and once the teachers found out, they evacuated the building. We went on lockdown … for just one drop of mercury.”

Because of Eastern Kentucky Power Cooperative’s intention to construct a new 278-megawatt, $819 million coal-fire power plant in Trapp, Ky. — just 10 miles from her hometown of Winchester, and even closer to the region’s primary source of drinking water, the Kentucky River — Brown again will be forced to confront the deadly carcinogen, this time on a much larger scale.

“If they had to clear out an entire school for just one drop of mercury,” she continues, “then what sense does it make to build a coal plant that will emit far more? I don’t think it’s worth that kind of risk.”

Neither do the dozens of other EKPC ratepayers and environmental activists who spoke out against the power co-op’s proposed generating station, dubbed Smith #1, at a recent hearing held by the U.S. Army Corps of Engineers. The Corps has yet to grant the 511,000 member co-op a permit to store coal ash on-site — which is almost exactly like Louisville Gas & Electric’s new 14-story ash pond proposed for southwestern Louisville.

“I was heartened by the fact that people from all walks of life turned out to speak about this proposal and why it’s such a bad idea,” says hearing attendee Wallace McMullen, energy chairman for the Cumberland Chapter of the Sierra Club. “Nursing students, college students, high school students, retired physicians, mothers … a really broad range of people.”

As a Louisville resident, McMullen believes urban Kentuckians should care about what happens in Clark County because of the global implications another coal-fired power plant will have on the environment.

“It’s going to generate lots of global warming pollution if it’s built,” says McMullen. “I believe climate change threatens the human habitability of the planet, so we should all care about such things.”

He adds that dozens of people spoke for more than two hours against the plant, whereas only two people — one of them an EKPC employee — spoke in favor of it.

Although EKPC claims it needs Smith #1 to meet a growing demand for energy across the 87 counties it services, a sizable body of research — including a scathing audit of EKPC ordered by the Kentucky Public Service Commission — points to the contrary: Reports generated by public and energy policy outfits like the Ochs Center for Metropolitan Studies, Synapse Energy Economics and New York-based T.R. Rose Associates unequivocally state that EKPC, its ratepayers and Mother Nature herself would be much better off if Smith #1 was canceled.

Most notably, an analysis produced by the Ochs Center in July 2009 states that if EKPC were to invest in weatherization, energy efficiency and alternative sources of power generation (i.e. hydro and wind), then the beleaguered co-op could not only meet future energy needs, but create 8,750 jobs that would inject $1.7 billion into local economies by 2013 — the same year Smith #1 is slated to come online.

Compare this with the meager 700 jobs the plant will create, not to mention the costs associated with its effects on health and the environment, and the math suggests scrapping Smith #1 is a no-brainer.

“Yeah, I’ve seen that report and several other reports that were commissioned by these groups,” says EKPC spokesman Nick Comer about the aforementioned studies, some of which were prepared for KFTC and the Sierra Club. Comer goes on to dismiss the studies, which was reminiscent of a previous interview LEO Weekly conducted with an EKPC representative last year.

“My impression is that we are and always have been leaders of energy efficiency in this state,” EKPC’s Kevin Osbourn told LEO in 2009. “We believe that the answer to the challenges in energy are to have a balanced approach, and that includes renewable sources as well as fossil fuels.”

Comer echoed his colleague’s rhetoric, adding, “That is costly, implementing efficiency programs or building renewable power plants or biomass or whatever option you go with. We continue to be a leader in renewables, but (renewables) aren’t going to replace the need for baseline generation.”

It’s true the company is the de facto leader of green energy in the commonwealth, and that its latest generating station, Spurlock #4, uses clean coal technology.

But consider the type of fuel that will combust within Smith #1’s massive boiler unit: Fifty percent will come from the Hazard 9 mountaintop removal mine in Perry County, while the remaining 50 percent will come in the form of “gob,” aka “garbage of bituminous” — a nasty mixture of coal waste, tire rubber and supplemental biomass that emits six times the regular amount of mercury than freshly mined, top-grade coal, to the tune of 520,000 tons emitted per year over the plant’s projected 30-year lifespan.

In this context, being the greenest energy company in the commonwealth doesn’t amount to much when 97 percent of your total generative capacity is derived from discarded Michelins and junk coal.

In an editorial that ran in both The Courier-Journal and The Lexington Herald-Leader on May 16, Kentucky author and farmer Wendell Berry expressed his concern about the dangers Smith #1 will pose for generations to come:

“We know,” writes Berry, “that we are not talking here about organic wastes that would eventually degrade into harmlessness. We are talking about permanent poisons such as lead, mercury, cadmium, zinc, selenium, arsenic, thallium, molybdenum and boron — neurotoxins and carcinogens.”

For what it’s worth, the Environmental Protection Agency agrees with Berry. In a letter to the U.S. Army Corps of Engineers, the EPA wrote that byproducts produced by Smith #1 “would result in significantly more emissions during its lifespan than more environmentally friendly preferred options,” and that alternative energy sources and efficiency measures “could reduce or even eliminate the need for new baseload capacity.”

Of course, EKPC’s intentions don’t amount to much in lieu of their financial situation. The aforementioned audit found that EKPC is nearly $1 billion in debt, primarily as a result of building new, increasingly expensive coal plants to compete with LG&E and Kentucky Utilities, and that its management needs to open its decision-making process to the people who pay into the co-op.

To that, Miranda Brown says, “I think that, over the years, the rural electric co-ops have changed dramatically from what they’re supposed to be. We need to start empowering people to run for their boards and become part of the decision-making structure, which is how they were originally designed. They’re democratic institutions, not like LG&E or KU. They have to answer to us.”