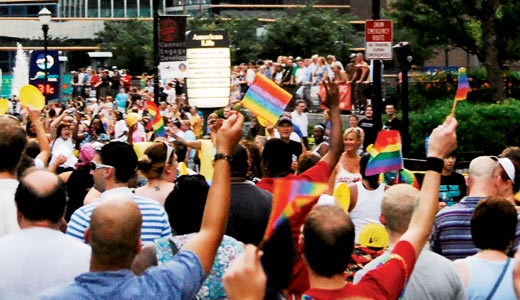 When the Kentuckiana Pride Fest parade rolls down Main Street Friday night, you can be certain of two things — there will be rainbows, there will be smiles. KPF is celebrating 10 years of the Pride Festival this weekend, a milestone by any measure. But all was not always rainbows and drag queens — many members of the Louisville LGBT community remember the days when protests and bullhorns took the place of floats and glitter. And to truly take pride in how far we’ve come, it’s important to look at where we’ve been.

“When we won the Fairness Ordinance in 1999, that was a significant turning point,” recalls Carla Wallace, an early activist and current member of the Fairness Leadership Council. “It was almost like we passed a milestone politically, and we were able to move into the Pride part of how we expressed ourselves. It was really a transition of saying, you know, we fight, fight, fight, and now let’s be proud and let’s be out.”

Wallace was one of the organizers of the first Pride parades in Louisville on June 27, 1987, which then was called a March of Justice. At the time, there was no Fairness Ordinance, which meant there was no law protecting gays and lesbians from discrimination. You could be fired from your job if someone simply saw you holding hands with your partner.

“We were at a point in trying to win rights for lesbian, gay, bisexual and transgendered people,” she says. “But in those early days, we had reached a point where the old Board of Aldermen was stalling, and the folks who had been trying to win the legislation, The Greater Louisville Human Rights Campaign, had decided at this point they had gotten kind of stuck and that it wasn’t going anywhere. So some of us decided there really needed to be a visible political expression. People were so scared and so closeted, and the politicians wouldn’t touch it. So we called a march.”

Wallace recalls how the small group took over the Jefferson County courthouse amid protesters and even death threats.

“One of the first things that happened was that an extremist group threatened that there would be violence. So there was a tremendous division in the gay community,” she says. “People said, ‘How could you all march? This is way too dangerous,’ and we said, ‘If we don’t march, they will forever be able to use violence to keep us down.’”

These Marches of Justice usually started at the courthouse and then made their way to Central Park. David Williams, also an activist at the time and former editor/owner of The Letter newspaper, recalls a group of about 150 at the first march. And while no violence ever erupted, there were plenty of bigoted protesters and invisible threats.

“Actually, at the very first March for Justice, they threatened Rev. Dee Dale of Metropolitan Community Church. They said they’d kill her if she showed up.”

“I was called by the police and told not to march because there wasn’t anything they could do,” confirms Rev. Dale. “So for a while, I couldn’t do anything without security. But we were very much together as a community. I think we created an understanding that all people should have civil rights.”

Dale remembers the hardships and stigmatism the LGBT community faced on a daily basis in the ’80s and early ’90s. She recalls one incident involving a man who came out to his family and also revealed he had AIDS. The family not only kicked him out of the house and burned his belongings, but they posted an obituary in The Courier-Journal announcing his death, even though he was very much alive.

“I challenged The Courier-Journal on that, and from then on, funeral homes are now the ones that turn in obituaries. It was unbelievable,” she says. “We had to encourage people that unless we began to come out and let people see who was gay and how many of us there were, we would keep fighting this.”

Carla Wallace was active in the anti-racism movement at the time, as well, and she says the groups became natural allies to fight for a common cause. They got support from the Kentucky Alliance Against Racist and Political Repression, whose members stepped in as peacekeepers, aka security.

“These relationships had been built because some of us had been very involved in peace work and in anti-racist work, so folks were like, ‘Well, OK, we’re not sure about this gay rights thing, but if you all say so. You’ve been there for us, and we will be there for you.’ So it was really important that the first march was very political and it was connected to anti-racist and peace movement work,” she says. “When you talk to some of those folks who were early peacekeepers, they talk about their own process of addressing their own homophobia, but also saying, ‘Look at the hatred being targeted at these people. That is definitely discrimination.’”

Bob Cunningham was one of the peacekeepers at the early marches, and says he couldn’t ignore the similar struggles between the LGBT community and African-Americans.

“Being a black man, I knew what discrimination was, and it was hard for me. I guess my conscience wouldn’t allow me just to be quiet and say nothing about seeing other people discriminated against,” he says. “I felt like I wanted to do something, whatever it was. I wanted my voice out there. I wanted it to be said that there were those of us within the black community who knew how discrimination has affected us and still does, we need to say something when we see another group of people being denied justice. I think silence is betrayal sometimes.”

Luckily Cunningham didn’t have to use physical force in protecting the marchers, but he does recall some of the insults hurled in their direction.

“I guess I was a little shocked that people would come out publicly and scream at people who were only trying to get the rights that we all should have,” he says. “I went out there purposely to be seen, to let people see that all of us feel that way. I went out there in support of gay folks and letting them know that I know what it means to be discriminated against, and that there are those of us who will stand up. As they say, we must stand for something or we’ll fall for anything, and I wasn’t going to fall for that.”

Perhaps the most important thing the Marches of Justice did was unite Louisville’s burgeoning LGBT community. Indiana University Southeast professor Debra Clem recalls the mood at the first march: “Defiant, exhilarating, celebratory, determined, comfort in our numbers and in the people around us. It was a family. There may have been only a few hundred in the early marches, but it quickly grew to maybe a thousand people. We were proud by the numbers and the participation. And we all knew just how idiotic discrimination was — an embarrassment for the city — but it was scary: the police escorts on horseback, the people screaming at us from the street curbs, the peacekeepers acting as a buffer between them and us. I’m glad the police were there, although I’m not sure they didn’t much like us either.”

Clem agrees we have come a long way since those early marches, which paved the way for a Pride Fest that is more celebratory in nature.

“I smile when I hear young people talking about Pride and how radical it is to march in Pride,” she says. “I’m really proud to have been on that cutting edge, although I know people who weren’t there during those early years can’t fully understand just how genuinely brave some people were in 1987 or ’88, especially those whose jobs were at risk if they were photographed, or who risked losing custody of their kids if they marched. I always felt exuberant at the end of the march, like I was really the most free thing on earth.”

Cunningham agrees that these marches helped make great strides in pursuing civil rights for everybody, not just gays and lesbians.

See related story in this week’s issue: ‘Open and affirming’