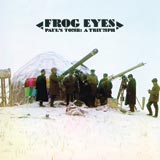 In the latest installment to Frog Eyes’ saga, the band wraps itself in a messy coat of noise and distortion, sometimes shaped and sometimes as unruly as a bear backed into a corner. Anyone who swooned over the huge and perfectly trashy guitar tone thrown in the occasional song by Neutral Milk Hotel or The Microphones knows how hard it is to find another moment like that, or another album that covers such territory. Occasional echoing beauty with harmonized harmonics interspersed with synths and messy noise riffs, description will not do justice to this album. On Paul’s Tomb, Frog Eyes have fully matured, creating their own language and palette only they can handle. Do you remember the first time you heard In The Aeroplane Over the Sea? Yeah, it’s that good, and a lot tougher.