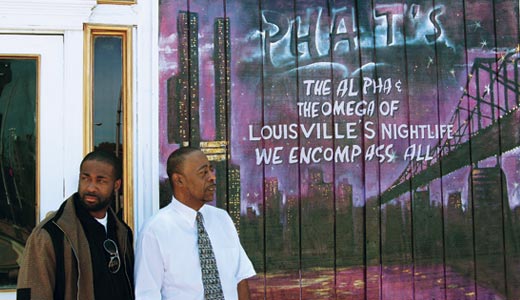 Following the fireworks of Thunder Over Louisville, the celebration inside Phat’s Bar & Grill was just getting started in the early morning hours on April 20, 2008. A surveillance tape shows a young woman wearing a tiny bikini top and matching G-string gyrating across a patron’s lap. A second tape of the dressing room shows a troupe of exotic dancers, some clothed in no more than sprinkles of glitter, waiting for their tips to be handed out.

The busy night came to an abrupt end, however, when a platoon of the Louisville Metro Police Department’s Special Weapons and Tactics team stormed into the three-story building along West Broadway. The squad of more than 20 officers filed in through the front entrance wearing protective goggles and black ski masks and carrying rifles. The crowd scattered, knocking over chairs, liquor bottles and each other.

One of the dancers fell to the ground, visibly frightened by the unfolding blitz. The surveillance video obtained by LEO Weekly then shows a burly officer pointing the flashlight attached to the end of his automatic firearm down at her. The stripper raised her hands before he kicked a nearby stool, which landed atop her naked body.

“I still get emotional talking about it,” says Bert Williams Jr., who co-owned the club with his father, Bert Williams Sr. He soon would learn that another SWAT unit was simultaneously executing a search warrant at his home, where his 5-year-old lived.

The search warrant issued for Phat’s alleged that the club was a hub of prostitution, drug sales, violent crime and fraud. Police arrested 20 employees and patrons on drug and prostitution charges during the raid — dubbed “Operation Purple Rain” — but they did not arrest the younger Williams. And though the elder Williams was arrested — on charges of possessing drug paraphernalia and tampering with evidence — a grand jury later tossed out the case.

Business took a nosedive following the raid, and as a result, Phat’s shut its doors a year later.

Earlier this month, the father and son business partners filed a lawsuit against Metro government, alleging that SWAT acted improperly, that police made false charges against them, and that officers stole $30,000 during the raid.

The Williams claim police unfairly targeted them because city officials considered their minority-owned strip club an eyesore in downtown Louisville, specifically because it was located on a busy stretch of Broadway. An open records request did not reveal any official Metro correspondence to corroborate that claim.

With the pending litigation in Jefferson Circuit Court, the pair hopes they’ll be compensated and, more importantly, that their reputations will be restored.

The suit also takes aim at Metro Police for allegedly deploying its SWAT team to make routine arrests that don’t warrant such force.

“When a para-military raid like this is performed, there’s a significant risk of civilian casualty and a danger to the officers involved,” says Louisville attorney Daniel Canon, who is representing the Williams in the civil suit. “And regardless of whether you’re a target of the investigation or not, you’re still subject to SWAT take-downs during these raids.”

Metro Police created the SWAT team — one of nine specialty operation teams in the department — to respond to confrontations with hostage takers, barricaded suspects and other situations that require specialized training or equipment.

In addition, when serving a routine search or arrest warrant, police use a point system based on six different categories, including the nature of the crime, criminal history of the suspect, and how difficult it will be to gain entry. If the scorecard adds up to 25 points or higher, SWAT participation is mandatory, regardless of what investigators or their commanders know about a particular case.

Metro Police began investigating Phat’s in September 2007 with the use of informants and undercover officers after receiving anonymous complaints about a “criminal enterprise.” In addition to the club allegedly being a hotbed for prostitution and drugs, police suspected the Williams of welfare fraud and tax evasion as well.

In 2003, the Williams opened the business as a regular nightclub, initially attracting a predominately collegiate crowd. But after falling behind on their lease, they decided to convert the business into a strip club.

The change was financially lucrative and quite popular, particularly among the local hip-hop community, where it came to be known as the “Sunday school of strip clubs,” according to the elder Williams. As the strip joint became increasingly successful, they say police presence in and around the business also increased.

In April 2007, before police launched their investigation into Phat’s, the Williams’ attorney at the time met with city officials, including Deputy Mayor William Summers and LMPD Chief Robert White, to address their concerns about the alleged harassment of Phat’s employees and customers by police, according to court documents.

Not long after those meetings, the younger Williams was arrested and charged with obstruction of government operations, alcohol intoxication, terroristic threatening and disorderly conduct. According to police, Williams Jr. blocked their entrance into the club during a robbery investigation, but Williams says he only stopped the officer after he failed to produce a search warrant. Eventually prosecutors dropped all charges expect the obstruction charge, which Williams Jr. says he was later acquitted of by a jury. Five months later, police launched the extensive “Purple Rain” operation.

Although the raid did result in arrests for drug possession and prostitution, Canon contends a full SWAT raid that consequently forced the duo to close up shop was unwarranted.

The suit against the city also alleges that police falsely charged the club owners during the investigation.

The night of the raid, for instance, Williams Sr. was arrested and charged with tampering with physical evidence and possession of drug paraphernalia. The police accused him of hiding a crack pipe in a couch, but a grand jury declined to indict him after a surveillance video revealed he was in fact had handcuffed in another room.

In particular, Canon says the suit focuses on police actions during the raid, during which several officers turned around surveillance cameras and blocked them from recording their actions.

LMPD spokesman Dwight Mitchell would not comment on the pending litigation, but confirms that the department’s Public Integrity Unit is investigating the officers involved in the raid. The investigation was launched as a result of the allegations in the lawsuit, he says.

The signage outside Phat’s hasn’t changed since its closure last fall. For the father and son team, who still dabble as urban entrepreneurs, passing by the untouched facade is a reminder of the three-year ordeal. And though the lawsuit seeks financial compensation, they say their main objective is much larger than recouping their lost investment.

“I’m hoping for exoneration and redemption. The lawsuit isn’t about revenge. It is about our reputation and credibility, which need to be restored,” says Williams Jr. “I’ve been told that if you plan on being a strip club owner in this city, then that’s what you can expect. I’ve been told that I’m supposed to be OK with it, but I refuse to take it, and I refuse to accept that.”